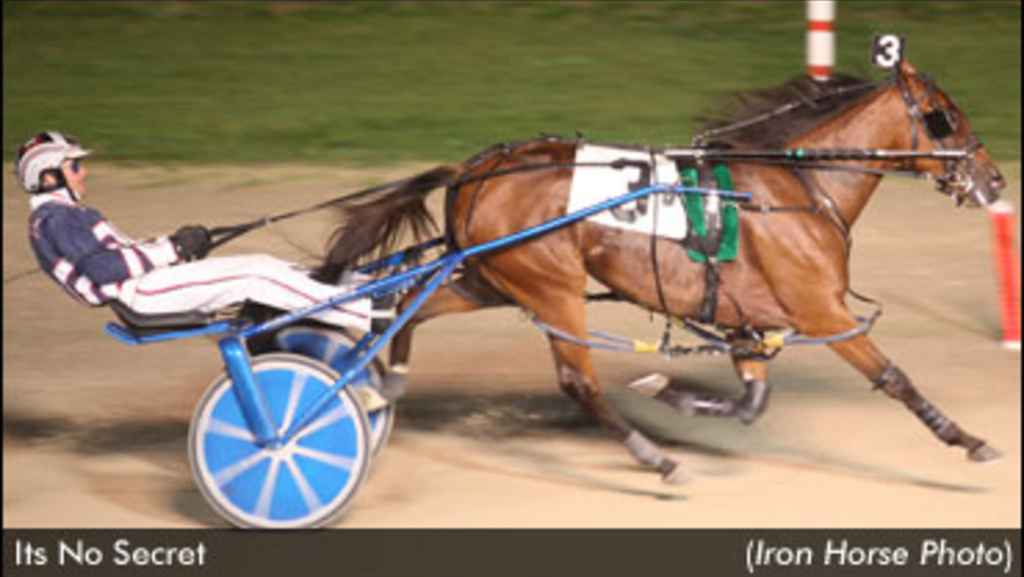 Reigning Gold champion Its No Secret and runner-up Kims Royal Day scored a pair of wire-to-wire victories in the two-year-old pacing fillies' fourth Gold Series elimination round on Friday evening at Flamboro Downs.

In the first of two $40,000 Ontario Sires Stakes eliminations, the leading divisional money earner Its No Secret and driver Anthony MacDonald led the field, which was scratched down to four fillies, through fractions of :28.4, :59.4, and 1:29.3 before stopping the clock in 1:57.4. She prevailed by one length ahead of first over advancer Raise Your Glass (Scott Zeron) while In The Wheelhouse (Billy Davis Jr.) and Mary Celeste (Stuart Sowerby) rounded out the field.

Bob Hamather of Exeter, Ont. owns and bred the Badlands Hanover-Secret Departure filly while Shawn Robinson handles the training duties. Its No Secret, winner of the last Gold Final on Sept. 14 at Grand River Raceway, now has a 3-2-0 record in the OSS program from five starts. She has never finished worse than third in eight lifetime starts, including a top three finish in the Battle Of The Belles, for earnings totalling $186,500.

The overwhelming favourite paid $2.10 to win.

The daughter of Royal Mattjesty out of the Badlands Hanover mare Kims Caper is owned by Stuart McIntosh of Essex, Ont. and trainer Blake Macintosh of Cambridge, Ont. Kims Royal Day has put together an OSS record reading 3-2-1 in seven starts to earn most of her $132,080 career bankroll.

The field for next week's $130,000 Gold Final is listed below in post position order.