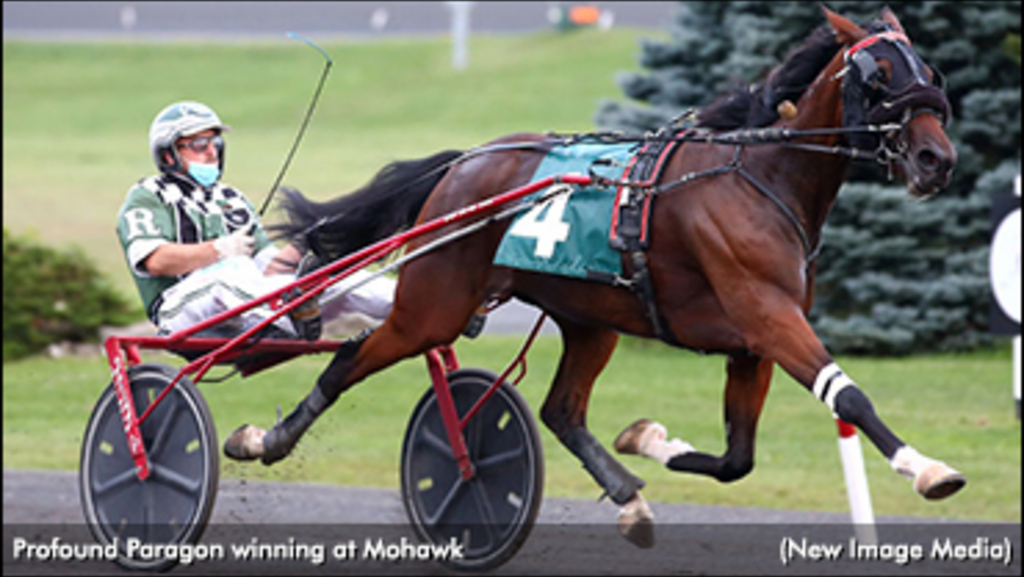 Profound Paragon put a six-race unbeaten streak on the line at Woodbine Mohawk Park on Tuesday (Sept. 1) and cruised to an effortless 1:55.4 personal best in the first of five $23,150 Grassroots divisions for the three-year-old trotting fillies.

With regular reinsman Jean Bernard “Bert” Renaud in the race bike, Profound Paragon lined from post 4 in the field of nine and soon after Alpina rang up the :27.2 opening quarter, Renaud moved the heavy favourite to the lead. Profound Paragon sailed to a :57 half and a 1:27 three-quarters and then repelled a challenge from Rockadero before pulling away to a one-and-three-quarter length victory in 1:55.4. Rockadero finished second and No Angel Here recovered from an early miscue to claim the third-place spoils.

“Her confidence is sky high right now and she really loves to win,” said trainer Julie Walker of Carlisle, ON, who shares ownership of the Muscle Mass daughter with breeder Steven Titus of Manalapan, NJ. “The owners, myself, and especially Bert, are really enjoying this ride.”

Since racing resumed in June Profound Paragon has only been bested once in eight starts, finishing fifth on June 20. Since then the Muscle Mass daughter has three overnight and four Grassroots wins to her credit and sits atop the three-year-old trotting filly division standings with 200 points.

“We wanted to try the Gold at Flamboro, with it being a half-mile, but the schedule was just a little too tight,” said Walker, referring to the fourth Gold leg on Sept. 27 at Flamboro Downs, just five days before the Oct. 2 Grassroots Semi-Finals at Woodbine Mohawk Park. “The way her (Grassroots) schedule has worked out this year has been perfect."

Three races later Moana moved into second spot in the division standings with her second Grassroots win of the season. Driver James MacDonald fired the Muscle Mass daughter away from post 9 and Moana led the field through fractions of :27, :57.3 and 1:26.3 before sailing to a two-length victory in a personal-best 1:55.1. Profound Paragon’s stablemate Yen was a hard-closing second and Umpteen Hanover completed the top three.

“She’s gone from becoming a little bit hot to a true professional. You can do anything you want with her,” said trainer Shawn Steacy. “She’s just a nice filly.”

Brantford resident Steacy conditions Moana for Landmark 12 Racing Stable of Lansdowne, 1187422 Ontario Inc. of Ottawa, ON and Hudson Standardbred Stable Inc. of Hudson, QC. In 10 sophomore starts Moana boasts a record of four wins and two seconds for earnings of $50,586.

“She raced good, she’s a very nice gaited filly,” said Doug McNair, who engineered the win for owner-trainer Cassandra Lecourt of Mirabel, QC. “She got to follow the best horse in the race and was fortunate enough to pick her off at the wire.”

In the fourth division, Sonadora Deo fired straight to the front from post 5 and romped through fractions of :27.4, :57.1 and 1:26.2 on her way to a four-and-three-quarter length victory in 1:55.4. She Must Be Magic and Magic Wanda were second and third, with all three fillies sired by Kadabra.

“She’s had a very disappointing season. I think she’s a competitive Gold filly, but she has had no luck and has run out of time points-wise,” said Bob McClure, who drives Sonadora Deo for trainer Luc Blais and owner Determination of Montreal, QC. “I think she would have won the last Gold she was in (Aug. 13), but I screwed up and ran her off her feet leaving, which is quite a task because she’s as solid as they come.”

In the final $23,500 division, favourite Pier Ho Kado cruised to a three-and-one-quarter length score in 1:55.4 to earn her second Grassroots win of the season and move into third spot in the standings. Highland Foxytrotr was second and Warrawee Vulcan was third.

“She raced really good tonight, she was pretty much perfect, just leaving the gate I had to be extra careful, but as soon as she settled in she was good and strong,” said Sylvain Filion, who steered the filly from Post 1 on Tuesday. “I moved her first-over, and around the last turn I knew I was a winner. She drew away down the lane and I never pulled the plugs. She’s a very nice filly.”

Ben Baillargeon trains Kadabra daughter Pier Ho Kado for owners Tom and Elizabeth Rankin of St. Catharines, ON. Through five starts this season she boasts a record of three wins, one second and one fourth.

The three-year-old trotting fillies will make their last regular season Grassroots start at Woodbine Mohawk Park on Sept. 21. The top 20 point earners from the regular season will then advance to two $20,000 Semi-Finals at the Milton oval on Oct. 2, with the top five finishers from each Semi-Final securing a berth in the $75,000 Grassroots Championship on Oct. 10.