While speed was plentiful on the $2 million-plus Kentucky Championship card at The Red Mile on Sunday (Sept. 19), the betting public’s dollar saw plenty of churn with seven of the eight $250,000 finals going to the public’s choice.

The afternoon began with a Sunday stroll by Dont Fence Me In, who registered a lifetime-best 1:50.2 victory in the final for freshman pacing fillies.

Leaving widest of the three-horse field, Dont Fence Me In nonetheless secured the top and set a clip of :27.2, :55.4 and 1:23.4 with Sloopy in tow from the pocket and Captains Princess in third. The trio remained in that order spinning for the final-quarter sprint, with Dont Fence Me In extending her lead to the beam over Sloopy to 1-3/4 lengths. Captains Princess gave close pursuit for third. 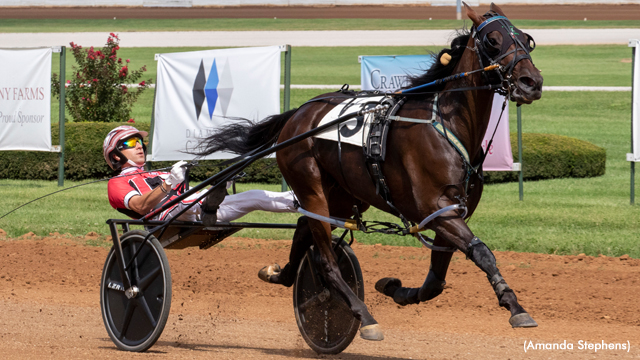 Owned by Riverview Racing, Alagna Racing, Steven Head and Jerry Glantz, Dont Fence Me In won her fourth race from seven starts, pushing her earnings to $199,375. Tony Alagna trains the Captaintreacherous filly, who paid $2.20 to win.

Pebble Beach graced world-record territory again, this time coming a fifth of a second off the mark when scoring a 1:48.4 win in the final for freshman colts and geldings.

Driver Todd McCarthy landed the Downbytheseaside colt in a race where the field aligned in post position order to a :27 first quarter. The field stayed strung at the pegs behind pacesetter Western Era, who fired to the half in :53.2 before facing far-turn pressure from Silverstone popping pocket. Pebble Beach tracked his move to three-quarters in 1:21.2 and left his cover behind off the turn, swooping to the lead as River Ness readied a stretch rally from last. River Ness kept rolling towards Pebble Beach late, but the Noel Daley trainee hit the beam in time to win narrowly with Wolftrax closing for third. 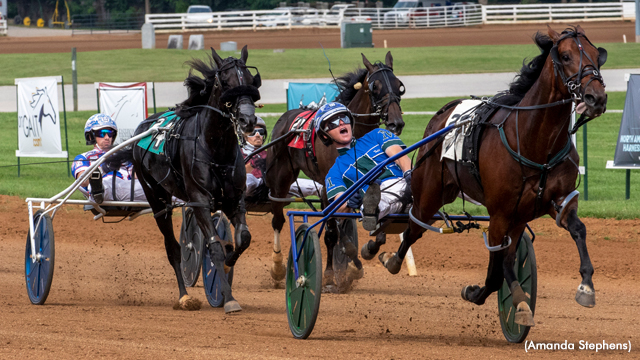 Dancinginthedark M dashed late for the lead to nab victory just in time in the final for three-year-old trotting colts and geldings, nailing Cuatro De Julio on the line in 1:49.3. 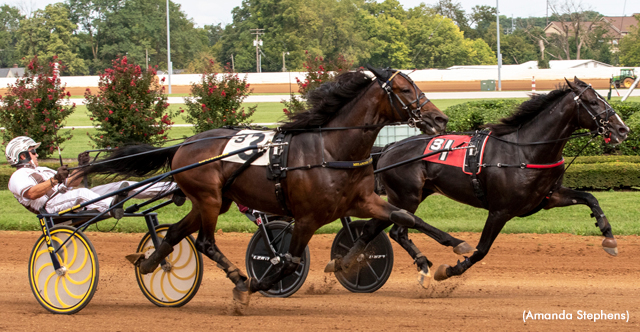 A colt by Readly Express, Dancinginthedark M won his fifth race from 12 starts this season and his eighth from 19 overall, lifting his earnings to $353,704. Menhammar Stuteri Ab owns the $9 winner that had Brian Sears in the sulky.

Slight favourite Empressive Hill powered to the lead up the backside and held firm on top to the finish of a 1:51.2 mile to take the final for sophomore trotting fillies.

Away third to a :28.4 first quarter, trainer/driver Jordan Derue sent Empressive Hill after the lead heading to the half and cleared control from second-choice Beltassima past the :55.4 midway mark. Beltassima inched off the pegs rounding the final turn to challenge Empressive Hill to three-quarters in 1:23.3 and entered the stretch giving futile pursuit. Empressive Hill coasted to the finish 2-1/2 lengths better than Beltassima, who settled for second, with her stablemate Piper Hanover rallying to take third from Lady Chaos. 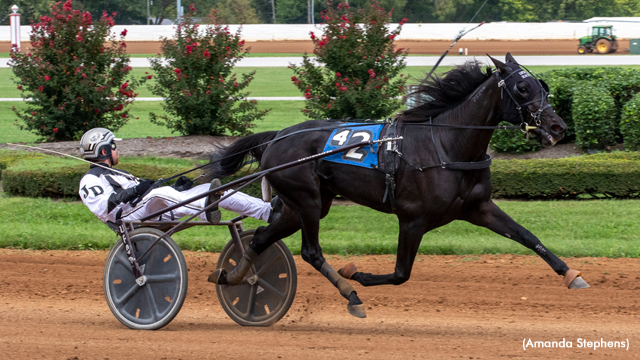 Co-owned by Derue with Bruce Soulsby, Alan Weisenberg and Gilbert Short, Empressive Hill won her sixth race from eight starts this season and her eighth from 15 overall, pushing her earnings to $225,375. She paid $4.40 to win.

Blue Diamond Eyes put in a gate-to-wire speed show in the final for three-year-old pacing fillies to just hold off a pocket charge from Thebeachiscalling in a 1:47.4 mile.

Scoring from post six, Blue Diamond Eyes bolted for the top with Thebeachiscalling settling into second moving to a :26.3 first quarter. The Ron Burke pupil rolled up the backside under no pressure to a :54.2 half and continued with no challenge to three-quarters in 1:21.2. Into the straightaway, the Captaintreacherous filly began to show some sense of fatigue as Thebeachiscalling came lunging late for the lead. Thebeachiscalling cut into her deficit as the finish drew closer, but Blue Diamond Eyes under high lines maintained command to the finish to win by a nose. High Minded took third with So Irresistible finishing fourth. 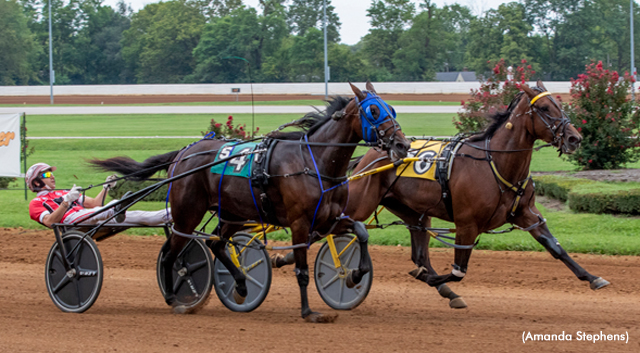 Owned by Thomas and Scott Dillon, Blue Diamond Eyes won her fifth race from 13 starts this season and her 10th from 26 overall, lifting her earnings to $989,914. Yannick Gingras drove the Captaintreacherous filly, who paid $2.10 to win.

Goldies Legacy raced gamely on the point through quick fractions to then withstand a wall of pursuers and win the final for pacing glamour boys in 1:49.

Mad Man Hill hustled off the wings and grabbed the lead to the first turn until Goldies Legacy, briefly yielding for the pocket, pulled wide in search of command. Komodo Beach tracked his move to a :26.4 first quarter but nestled into the pocket as Goldies Legacy asserted himself on the point. To the half in :53.3, Komodo Beach grew increasingly anxious on driver Yannick Gingras’ helmet but stayed put to the inside as Exploit rushed from last to press the pacesetter to three-quarters.

Challenged to the third station in 1:21.2, Goldies Legacy rebuffed Exploit into the lane while a trio came charging after the lead late. However, their late-springing efforts came up short as Goldies Legacy held his ground from between the competition to win by a neck over Komodo Beach, who came rolling three-wide for second. Mad Man Hill scurried up the pylons for third while Toronto darted through traffic and finished fourth. 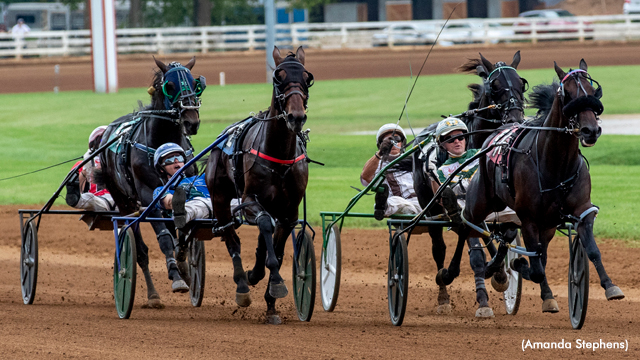 A gelding by Always A Virgin, Goldies Legacy won his seventh race from 19 starts this season and his ninth from 29 overall, lifting his earnings to $271,985. Jeff Cullipher trains and co-owns the $3 winner with Pollack Racing LLC.

Selfie Queen delivered a strong preparatory victory for the Mohawk Million next Saturday (Sept. 25) with a 1:53 effort in the final for freshman trotting fillies.

Pink Gypsy powered for the lead from post nine and pocketed Selfie Queen, who promptly came off the pegs to a :28.3 first quarter and took over the lead. She continued up the backstretch uncontested through a :56.3 half and cruised to three-quarters in 1:24.4 before opening on her rivals off the turn. The Muscle Hill filly coasted to the finish 3-1/4 lengths better than Eternal Lee flying to take second from More Than Ever, with Disclosure finishing fourth. 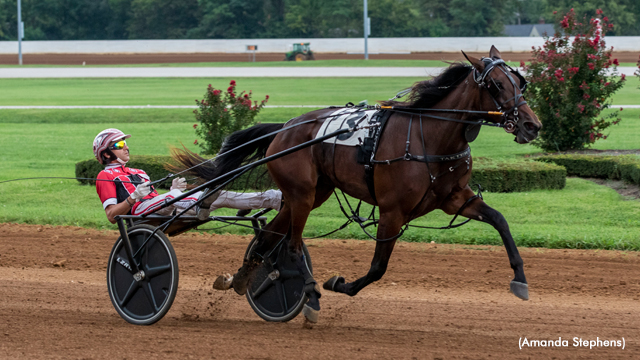 Double Deceiver commandeered his competition past the half and held his late challengers at bay to win the final for two-year-old trotting colts and geldings in 1:52.3.

Away third to a :28 first quarter, driver David Miller dashed Double Deceiver off the pegs to the point through a :56 half and led to the final turn as Classic Hill came off the cones from third to race first-over. He continued uncovered towards three-quarters in 1:24.4 and began to retreat as Double Deceiver hit another gear off the turn and had just the fresh-legged backfield to withstand. The Carter Pinske trainee stayed strong on the lead to the finish, holding a length over Rebuff, who rallied for second. Looks Like Moni finished third and Gigondas closed for fourth. 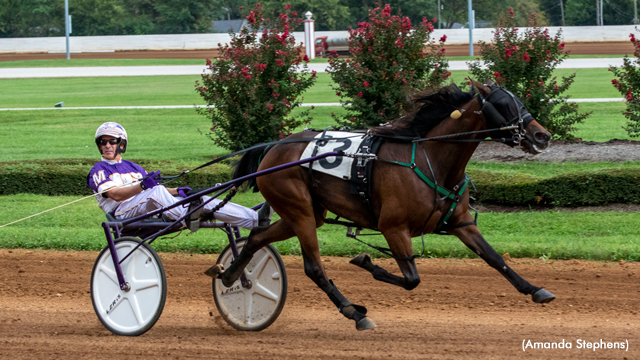 Sunday’s card also started two of the eight $50,000 finals for the Kentucky Commonwealth Series, with Branded By Lindy overcoming post 10 to take the first final, for two-year-old trotting colts and geldings, in 1:53.

Wide and tracking a move from Access to a :28 first quarter, Branded By Lindy landed on a brief lead into the backstretch. Golden Life As, positioned fourth, swept to the front as the dust settled up the backside to take the field to the half in :56.1 and by three-quarters in 1:25. However, Branded By Lindy proved sharp off the covered ride and sprung to the lead in the stretch to deliver as the odds-on choice by 1-3/4 lengths over Golden Wall As. Access gave chase from third while Senna finished fourth.

Winning his fifth race from seven starts, Branded By Lindy has banked $80,350 for owner/breeder Lindy Farms of Connecticut. Domenico Cecere conditions the Chapter Seven colt, who paid $3.20 to win, while Yannick Gingras sat in the sulky.

Six Feet Apart swooped to the top moving by the half and left his competition behind in the Commonwealth final for rookie pacing colts and geldings, stopping the clock in 1:50.4.

Danger Zone zipped to the lead to a :27.3 first quarter with Boston sitting second and Six Feet Apart third. Boston soon vacated the pocket to the backside and took the lead heading to the half before yielding control to Six Feet Apart by the station in :55.1. From there, the Sweet Lou colt cruised to three-quarters in 1:23.1 and kicked away with a :27.3 final quarter to win by 3-1/4 lengths over Danger Zone, who snagged second from Boston late. Anvil Hands finished fourth.

Stakes action continues at The Red Mile on Monday (Sept. 20) with the remaining six finals of the Kentucky Commonwealth Series. First-race post time for the 10-race card is 1 p.m. (EDT).