The third leg of the Kindergarten Series featured nine $20,000 divisions for two-year-olds at The Meadowlands on Friday night (Sept. 17), with a pair of trotting fillies scoring impressively after being heavily bet at the windows.

Lilbitalexis (Walner-Jolie De Vie) stopped the clock in a lifetime-best 1:52.2 for trainer Nifty Norman to lift her lifetime stats to five wins from six starts. The 1-9 public choice ($2.20 to win) took over at the half and strolled to a 2-1/4-length, never-in-doubt score. 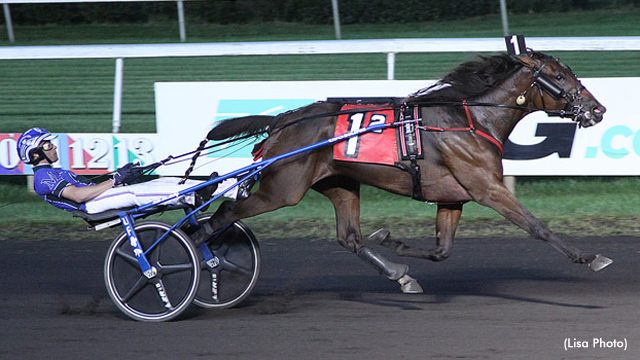 “She’s pretty special,” said driver Todd McCarthy. “I was getting off the first turn there pretty good and once she got to the pocket she was good. She then moved to the lead easily. I heard Mark [MacDonald, driving second-place finisher Cash Infusion] on my back in the stretch but when I popped the ear plugs, she went well from there.”

Misswalner Fashion (Walner-Sweet Love) made it three wins in four lifetime tries for trainer Jim Campbell after hitting the wire in a lifetime-best 1:54.1, 6-1/4 lengths in front of Lookin Chic after she made the front just after the quarter.

“She’s got tons of talent,” said driver Tim Tetrick. “She didn’t like the dirt hitting her in the face early and I didn’t want to get away too far back. I didn’t want to cut the mile because she was asleep up there on the lead. She’d be happy to go 45 seconds for a quarter so I had to keep her busy.”

Misswalner Fashion paid $2.40 as the 1-5 favourite on a night where favourites scored 12 times on the 13-race card.

Robertsin ($2.60 as the 1-5 public choice) tripped out to take a division for male trotters. The gelding by Muscle Hill-Sina charged home off cover to win by a head in 1:55 for trainer Nik Drennan.

Driver George Brennan likes his horse but didn’t think he was at his best.

“I didn’t want to have to put him on the lead. I wanted to get some kind of trip. The trip worked out good. He should have finished it off much better because early in the season he was coming home in :27. Tonight, he did not rocket right by. He wasn’t explosive. But his ‘B’ game was good enough.”

The Brett Pelling-trained Hammering Hank stayed perfect in five lifetime starts in a split for pacing colts and geldings. The gelded son of Captaintreacherous-History Repeats was last at the half in the seven-horse field, picked up a live tow from Layton Hanover down the backstretch and rolled by late to win by a length over Seven Hundred with McCarthy in the bike in 1:53.4.

McCarthy and Norman also teamed up for Kindergarten victories with pacing fillies Hood Party ($3.80) in 1:52.2 and Gotthegreenlight ($4) in 1:51.

Other Kindergarten winners were: pacing gelding Early Action ($2.60) in 1:51.3 with Corey Callahan aboard for trainer Joe Holloway; trotting filly Brickhouse Babe ($3.20) in 1:54.1 for driver Mark MacDonald and trainer Ray Schnittker; and trotting colt Molotov Cocktail ($3) in 1:56 with Scott Zeron in the bike for Linda Toscano.

A LITTLE MORE: McCarthy scored four times on the card while Norman trained three to victory lane. … The lone winning non-favourite came in the first race as Kingofthejungle scored in a GSY Series event at odds of 4-1. … All-source handle totaled $2,144,644. … Racing resumes Saturday at 6:20 p.m.

(With files from Meadowlands)