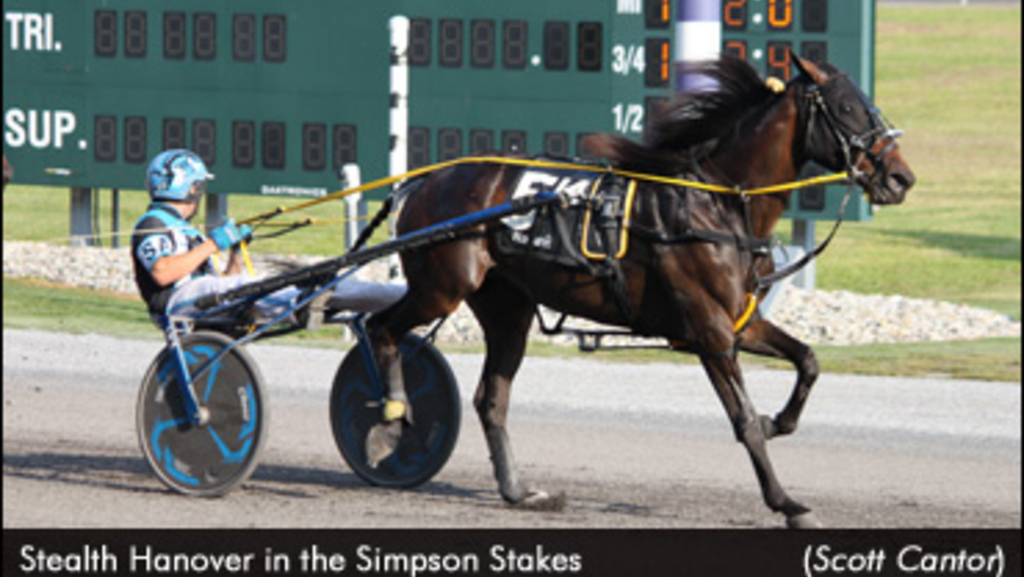 At nearly 99-1 odds, the Francisco Del Cid trainee Stealth Hanover made a break in the Hambletonian eliminations, finishing eighth, failing to make the finals. After another up-the-track finish in Pennsylvania Sire Stakes action, the three-year-old gelded son of Andover Hall-Secret Credit began to figure it out.

With the addition of trotting hopples and driver Simon Allard, things began to turn around. Stealth Hanover entered the John Simpson Memorial at Harrah's Philadelphia on Sunday afternoon (September 17) on a two-race win streak -- the latest coming in the Liberty Bell last week at Harrah's Philadelphia, a three and three-quarters length win in a lifetime's best 1:54 clocking.

This week, he was face-to-face with Hambletonian champion Perfect Spirit (Ake Svanstedt). It was the Svanstedt charge's first race since winning the prestigious trophy back on August 5, via disqualification. This day was indeed a different day, however, as Stealth Hanover went right to the top and never looked back. He won in a track record time of 1:52, ousting the great Pinkman's record of 1:52.2 for three-year-old gelding trotters set in 2015. The win was the fifth of the season for Stealth Hanover, who is also co-owned by Mario Mazza.

There were four $30,000 divisions in total of the John Simpson Memorial for three-year-old trotters. The Julie Miller trainee Fly On scored another impressive victory in race two on the program. The son of Muscle Hill-Calchips Finisher drew away to win in a time of 1:53.1 for owners Arden Homestead, Gaitway Stables, and the Andy Miller Stables. It was easily a lifetime best.

In a re-match of the Townsend-Ackerman at the Meadowlands, Yes Mickey (Ake Svanstedt) turned the tables on Two AM (Tyler Buter) in 1:53.3. The gelded son of Muscle Hill-My Favorite Chip struck the top after being parked the quarter, going on to a decisive victory for owners Melby Gard Inc.

Division three went to the Canadian-owned Awol Hanover, winning for red-hot trainer Luc Blais in a lifetime's best 1:54.3. The gelded son of Donato Hanover-Angel Fire Hanover sat pocket behind the deliberate speed of President Lindy, before edging out at the eighth pole to power by. He is owned by Determination of Montreal, Que.

There were also four division of the John Simpson Memorial for three-year-old colt and gelding pacers going for a purse of $30,000. The first division was won by Mark Silva trainee Mac Attack (Andy Miller). The gelded son of Somebeachsomewhere-Pirouette Hanover was a dominant front-end winner, scoring in a lifetime's best 1:50.2. He is owned by Jeffrey Snyder.

Division two went to Qs Cruise (Victor Kirby). The gelded son of Yankee Glide went on to his seventh win in his last nine starts with the pocket victory today. The 1:50 clocking was a lifetime's best. He is owned by trainer Jim King Jr. The win put him over the $100,000 mark in career earnings.

The third division was taken by Eddard Hanover (Matt Kakaley). The gelded son of Dragon Again-Edra Hanover went to the top and held off the pocket sitter Macs Jackpot to secure the win. The final time was 1:52.1. He is owned by Burke Racing, JJK Stables, Larry Karr, and Weaver Bruscemi.

The fourth and final division went to the Canadian-owned Beach Boogie (Simon Allard). The gelded son of Somebeachsomewhere-Dance Until Dawn was expertly rated by Allard, scoring in 1:52.1 for owners Allard Racing of Saint-Esprit, Que., and Jack and Ferne Frydman of Thornhill, Ont. The Rene Allard trainee was able to out-sprint the heavily favoured Donttellmeagain to win for the eighth time in his career.

(With files from Harrah's Philadelphia)