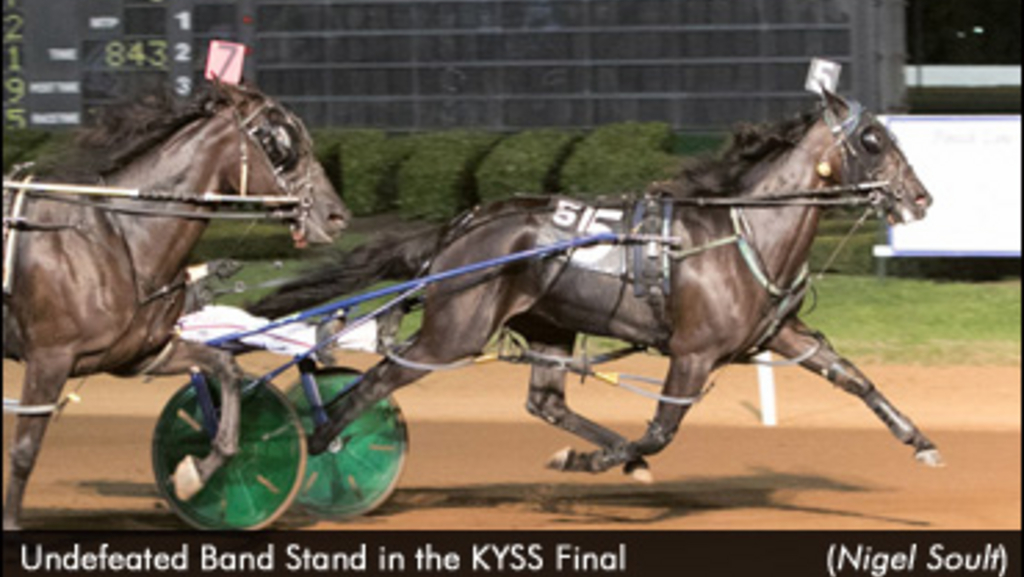 On a warm late-summer evening in the Bluegrass, The Red Mile hosted the annual Kentucky Sires Stakes (KYSS) Super Night on Sunday, Sept. 17, with $1.7 million in purses awarded in the eight finals for two and three-year-olds of both gaits and sexes.

Under new conditions this year that resulted in each of the four two-year-old finals having a purse of $250,000, while the three-year-olds raced for $175,000 in each of those four divisions.

Trainer Tony Alagna, racing in the KYSS program for the first time as a direct result of the new conditions that allowed eligibility to progeny of mares who resided at least six months in the Commonwealth, sent out seven in the finals and had a pair of winners in the two-year-old colt pacer Key Advisor and the two-year-old filly pacer Band Stand. Both winners were driven by Joe Bongiorno.

Key Advisor held game down the stretch to hold off favourite Grand Teton and driver Mark MacDonald and win by 2-1/2 lengths in 1:51.1. Trajectory and Yannick Gingras finished third.

Key Advisor was one of six newly-crowned KYSS champions who were purchased at the 2016 Lexington Selected Yearling Sale; the other two are homebreds. A son of Somebeachsomewhere, Key Advisor was a $200,000 purchase by Brittany Farms and Key Advisor Racing from breeder Courant Ab. His KYSS final win was his third straight and a career best, increasing his earnings to $164,350.

Presenting the trophy to the winning connections was Kelly Knight Craft, who was recently confirmed as the U.S. ambassador to Canada.

Band Stand completed a sweep of the three KYSS preliminaries and final with a 1:52.4 effort. Bongiorno rallied the daughter of A Rocknroll Dance from fifth early, moving third-over and then three-wide in the final turn to win by a half-length over Lets Fall In Love and Gingras, with Dance Blue and MacDonald third.

Now a perfect five-for-five in her brief career, Band Stand is a $40,000 yearling purchase by Bradley Grant of Milton, Ont. from breeders Steve Stewart and John Carver. The freshman filly now has earnings of $171,550.

Top Expectations sprung a 10-1 upset in the KYSS final for two-year-old filly trotters. Driven by Marcus Miller, Top Expectations closed late in a 1:54.1 mile to edge Lily Stride and Jeff Gregory by a neck, with Zoe Bi and Aaron Merriman third.

Top Expectations had won once in the KYSS preliminaries and needed all she had to best Lily Stride, who was a winner earlier this year on the Pennsylvania Sires Stakes circuit but was able to race in Kentucky as a result of the new dual eligibility conditions. The daughter of Cantab Hall was a $120,000 yearling purchase from breeder Dunroven Stud by Quebec-based owner Daniel Plouffe, best known as owner of Triple Crown champion Blissful Hall. Trained by Erv Miller, Top Expectations won for the second time in eight starts while increasing his earnings to $168,378.

Bred by Frederika Caldwell, Hat Trick Habit is a $65,000 yearling purchase of Fred Monteleone Stable. Frank Antonacci is the trainer.

In The Dark was the only 2016 KYSS champion to successfully defend the title when she scored a 1:51.2 victory in the $175,000 final for three-year-old filly pacers. Trace Tetrick was in the sulky behind In The Dark as she bested runner-up Almargot A Fever by a half length, with Straightontherocks and Merriman third.

Bred by Stewart and Rick Rader, In The Dark was a $8,000 yearling purchase by Jim Avritt Jr. The Jack Gray Jr.-trained daughter of Cambest won for the fifth time in seven starts this year, with her prior scores coming on the Kentucky fair circuit. Sunday's KYSS final win increased her career earnings to $199,825.

Tetrick and Gray made a second trip to the winner's circle with the three-year-old colt trotter Beer Dad, who led wire-to-wire in 1:55.3. Defending KYSS champ Starlight AS and Elliott Deaton finished 1-3/4 lengths behind in second, with Hes On A Mission and Tim Tetrick third.

A homebred of longtime Kentucky-based breeder/owner Dr. James Sautter, Beer Dad is a son of Tequila Spur. The win was his second in eight starts this year after going unraced last year at two. Beer Dad's earnings now stand at $91,000.

Cassandra AS led from start to finish in the final for three-year-old filly trotters. Tyler Smith was in the sulky as Cassandra AS bested Sadies Trouble and Tim Tetrick by 1-3/4 lengths, with the winner's stablemate Almondy AS third for Deaton. Defending KYSS champ Sheas Victory made a break early and was never in contention.

Anette Lorentzon trains Cassandra AS, an ACL Stuteri Ab-bred daughter of Allstar Hall, who was second by a head to Sheas Victory in last year's KYSS final. Sunday's win was her second in four starts this year, bringing her career earnings to $145,150.

Prewitt, in partnershp with James McLaughlin and trainer Kevin Thomas, purchased Mt Sterling Mafia as a yearling for $35,000 from breeder Walnut Hall Ltd. Winless last year in six starts, Mt Sterling Mafia now has four wins in 10 starts this year. His career-best effort on Sunday night increased his earnings to $152,870.

The Kentucky Super Night card wraps up the early portion of the 2017 meet at The Red Mile. After a 10-day hiatus, racing returns to the historic racetrack in Lexington on Thursday, Sept. 28, the first of eight cards of the traditional Grand Circuit stand.

(With files from KYSS)