Looksgoodinaromper established a stakes record when winning the first division of the $129,400 Ohio Breeders Championship for two-year-old pacing fillies in Sunday (Sept. 15) action at the Delaware County Fair.

The Pet Rock filly yielded the early lead to Corner Pocket, but Looksgoodinaromper retook the lead before the quarter in :29. Driver Chris Page set a comfortable pace through the half in :58.2 and three-quarters in 1:26. 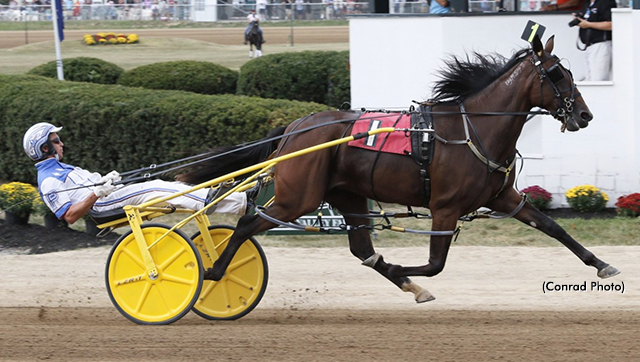 Looksgoodinaromper, who completed the “Ohio Triple Crown” with her win the Ohio State Fair and Ohio Sire Stake Final, is owned by Burke Racing Stable and Weaver Bruscemi.

In the second $64,700 division, PJs Legacy edged the pacesetting Beautiful Beach by a scant nose in 1:54.3.

PJs Legacy won for the fourth time in seven seasonal starts for Jennifer Brown, Hutchison Harness, Joelyn Ridder and Mark Kantrowitz. Ryan Stahl sat in the sulky. The Big Bad John filly, who was a $37,000 yearling purchase, is conditioned by Brian Brown.

In the $12,900 OBC for aged pacers, a pair of Nick Surick trained geldings battled down the lane, but Dragonology edged stablemate Born To Be Bad in a stakes-record-equaling 1:51.4. Dynasty Racing is the owner of the Dragon Again four-year-old and Brett Miller sat in the bike.