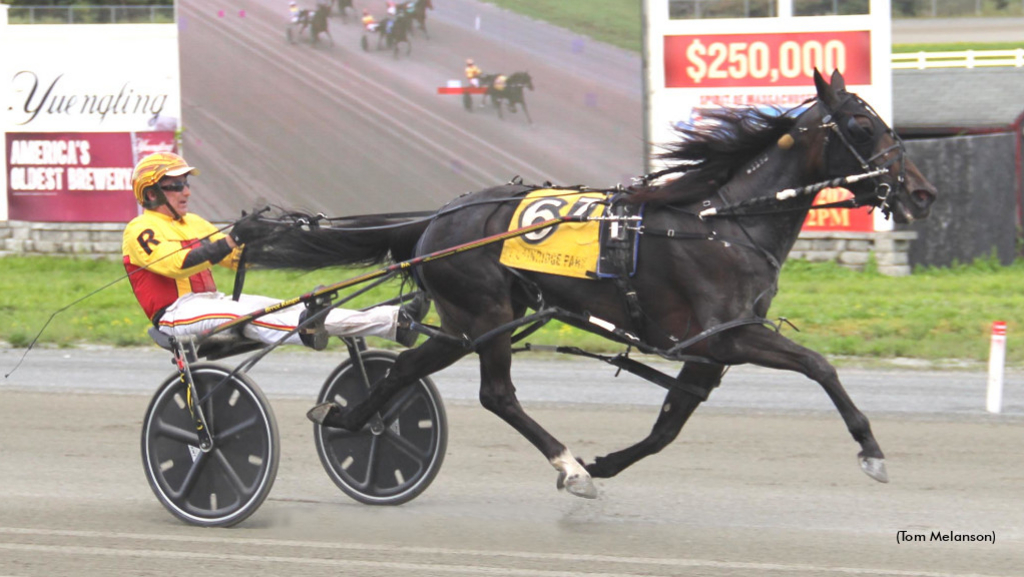 ’s leading drivers Bruce Ranger and Kevin Switzer, Jr. pulled farther away from their peers but maintained the same distance between each other as they both registering hat tricks on Tuesday while the track’s second leading trainer Elisha Lafreniere got closer to the top of her category after scoring three wins of her own.

Ranger won the featured $20,000 Open Pace for fillies and mares with Pure Cotton ($4.40), who stalked fast fractions of :26 and :53.4 from fifth before pulling first-over past the half to track down the pacesetting Adashious Hanover (Luke Hanners). Pure Cotton had the lead by the top of the stretch and extended it to 3-1/2 lengths at the wire where she won in 1:51.

With the win, Pure Cotton broke the century mark in earnings this year, now with $102,720 on her card for owner William Hartt. Lance Hudson trains the winner.

Ranger also won with Always Beachy (1:54.2, $5.00) who is owned by Lindy Farms of Connecticut and trained by Domenico Cecere and Amini (1:52.3, $3.40) for owner Karma Racing and trainer Elisha Lafreniere.

As noted, Amini, who scored her third straight win at Plainridge today, was one of Lafreniere’s three winners. She was joined by Sweet Sally Sue (1:54, $2.40) for Robert Stasio and Devita Racing and I Pay Your Salary (1:54.4, $4.60) in a new lifetime mark for Lynette Buter.

Switzer drove both Sweet Sally Sue and I Pay Your Salary for Lafreniere and nabbed his third win behind Acefortyfour Cory (1:55, $13.60) for owner/trainer Jamie Gerard.

When all the dust had settled on Tuesday, Ranger tops the driver colony with 117 wins and Switzer sits second with 102. Lafreniere is also second among all Plainridge trainers with 56 wins, just six behind the leading Jimmy Nickerson who now has 62 wins after taking one race during the card Tuesday.

There are a couple items coming up on the racing schedule at that should be noted. Sunday racing begins September 18 and runs through October 23. Post time will be at 2 p.m. for all Sunday cards. Also the Massachusetts Sire Stakes starts at Plainridge on Sunday (Sept. 25). That series runs through the month of October and culminates on Monday (Oct. 24) with all eight finals.

For now, live racing resumes at on Thursday afternoon (Sept. 15) with post time at 2 p.m.