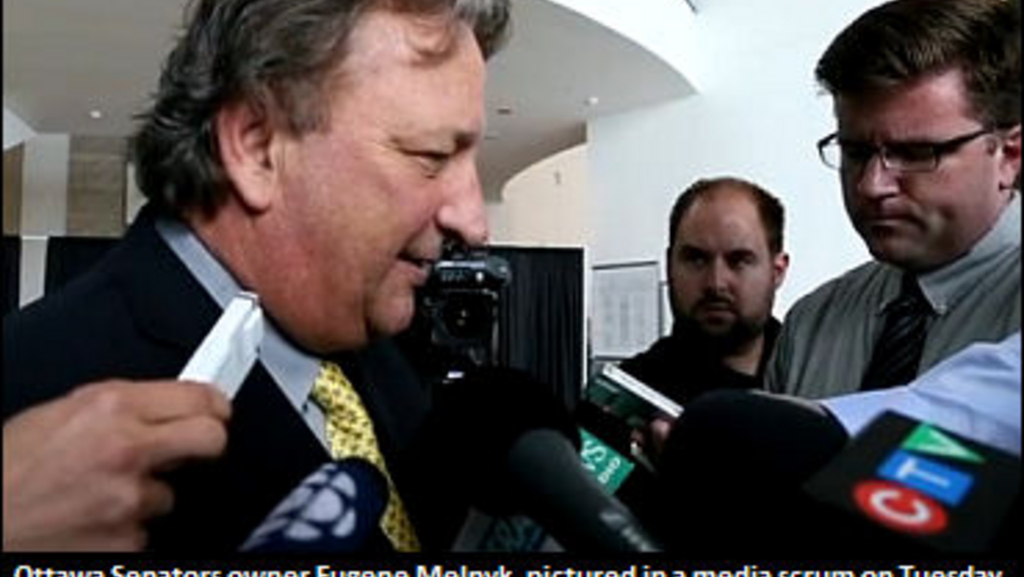 On Tuesday, September 11, Ottawa Senators owner Eugene Melnyk, who recently lost out to Rideau Carleton Raceway in the controversial Ottawa casino expansion issue, took to Toronto airwaves and fired off a series of shots directed at the five-eighths-mile harness racetrack.

Speaking with Bob McCown during ‘Primetime Sports’ on Sportsnet Radio The Fan 590, Melnyk described Rideau Carleton Raceway as “a little, tiny ‘C’ track that wouldn’t even make it at the Idaho State Fair.”

When asked by McCown whether he had ever been to Rideau Carleton Raceway, Melnyk went on to say, “I’ve got to be honest with you, I was there about 15 years ago just to lay down a quick bet for a horse and watch a race, and then I was out of there.”

Melnyk later went on to say, “I wouldn’t go there without an army.”

McCown later asked if Melnyk’s quest to land an Ottawa casino was over. He responded by saying, “No. You kidding? We’re just getting warmed up.”

Losing ten million a year!! Wow thats really hard to
swallow´.Imagine anyone of us running our household or
stable in this manner.
This little tiny C track as you put it Mr.Melnyk is
obviously doing much better than your Senators from a
business standpoint.Perhaps you should frequent RCR more
often and learn a few things from management there.
Oh! and if you need an army maybe your Senator defensive
core could accompany you to the track.
Your comments from Toronto is just another example
of mouth engaged before brain in gear.

Melnyk raced at the old

Melnyk raced at the old Barrie racetrack back in the day so he should be very familiar with a rundown place as he calls it. It was ok for him to race his $2,500 claimers and collect paycheques but now that he is a high and mighty businessman and needs a crowd to roll with him to frequent a place like Rideau. Hypocritical at best.

I also find it incredible that Sportsnet brings him on their show and will not bring anyone from this industry on to tell the public whats going on with this industry and how it has been decimated by an inept Government. I have emailed McCowan in the past asking him if he would speak about the plight of the racing industry on his show and received no response. Its laughable that he is more than willing to have a schmoozefest with Melnyk because he is in the in crowd and sits there and allows him to slam Rideau Carleton in his segemnt without allowing someone to rebutt what his pal Melnyk is saying. McCowan is a former standardbred owner and has the power to bring this industries plight to the public in a big way, but chooses not to.

At any time I would be

At any time I would be pleased to treat Mr. Melnyk to any evening of racing and entertainment at Rideau Carleton. I'm sure Mr. Melnyk would appreciate the view of the racetrack while enjoying fine dining in the 750 seat dining room. It is usually full so his experience would really intensify in the electric atmosphere with the roar of the cheering crowd as the horses come off the final turn. He would also be impressed that in spite of the current difficulties in the horse racing, RCR and its horse people still support 64 local charities through their fundraisers at the Albion Road facility. Since its $100 million renovation it has become a premier overall entertainment destination. I would also love to get him a ride in the starting car. This is an experience that Rideau's patrons have raved about for years. As a horse owner, Mr. Melnyk would likely find that particularly interesting as he has been to many tracks around the world and has never been given the opportunity to get that close to the horses for an actual race.

In between races he could also play one of the 1250 slot machines or enjoy some simulcasting action from one of North America's other premier racing venues.

There are a lot of people who

There are a lot of people who make a living because of that little "C" track Mr Melnyk, not that you give a crap about the little people! Then again greed does drive millionaires. Pity you didn't scoop a casino to help you grow your wealth! In Reciprocating I will not go to your arena with an army!

What a low blow from Mr.

What a low blow from Mr. Melnyk. His criticism and denegration of RCR reminds me of school bully tactics---not unlike the Liberal government of McGuinty and Duncan and the OLG under Paul Godfrey. Just what kind of province are we living in when money and power come before decency? Mr. Melnyk may be a horse racing participant and a supporter of thoroughbred racing at WEG but he obviously looks down his nose at the struggling standardbred industry, most of which has, to date, raced at places such as RCR. Many a good horse, driver, trainer and owner got their start on the rural tracks. I hope Bob McCowan will offer the same amount of airtime to a representative of RCR and standardbred horsepeople.

I remember when the whole

I remember when the whole casino issue started in Ottawa. Mayor Watson was dead set against it. He wanted the casino downtown. When the people of Ottawas spoke, he had a change of heart and eventually decided RCR was the best choice after all. Melnyk should go back to RCR since he hasn't been for 15 years. I'm sure there have been changes. He was probably promised something by OLG (Godfrey) which cannot come to fruition and is ticked off. I agree with Kathy McBride "Smart money backs a business with a 50 year history of success - RCR!"

Good job by Melnyk to spout

Good job by Melnyk to spout off in Toronto, away from the home of the Sens and Ottawa residents. What a childish temper tantrum by an individual who should know better! As a harness racing participant whose home track is RCR, I am enraged by Melnyk's comments. I love my home hockey team, but will NEVER again support Eugene by spending a penny at the CTC. It appalls me that his comments serve only to drive a wedge between thoroughbred and standardbred racing participants. His claim that the Sens are losing $10 million a year are outrageous. First - what businessman in their right mind would hang on to such a money-losing business? Second - who for one minute could possibly believe that he would funnel profits from a casino into a hockey franchise? Those profits will make their way into an offshore, tax free bank account. And finally, if he cannot make a success of a hockey franchise, why should the city of Ottawa back him in a bid for a casino? Smart money backs a business with a 50 year history of success - RCR!