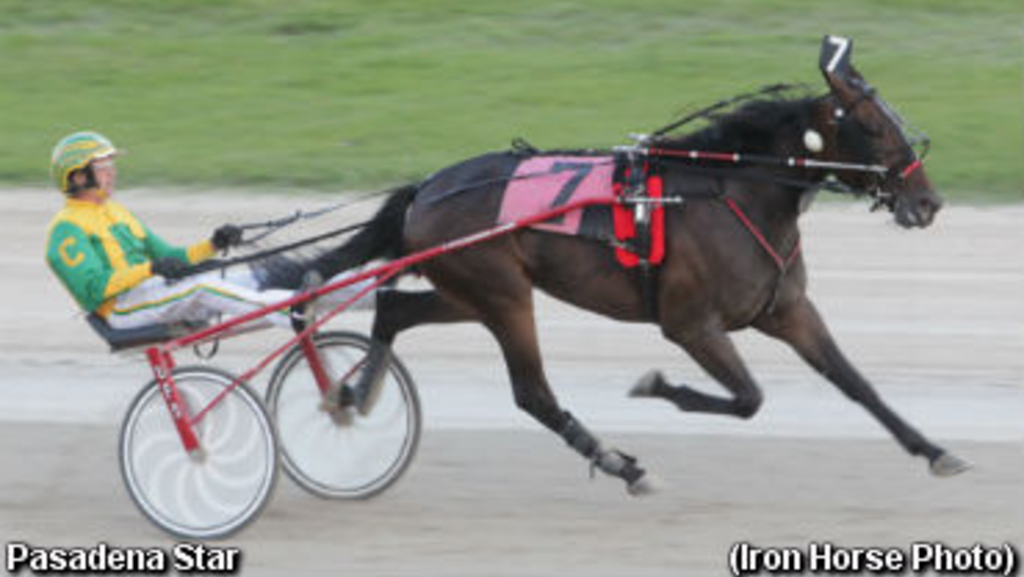 When it comes to two-year-old trotting colts and geldings in the Ontario Sires Stakes program this year, there hasn’t been a better Grassrooter than Pasadena Star.

The Bob McIntosh-trained youngster entered Monday’s OSS Grassroots event at Grand River Raceway with a 3-0-1 record from four assignments in the provincial program, and he chalked up another victory thanks to his come-from-behind tally for driver Steve Condren.

Pasadena Star and Condren got away fifth before going first-over and working their way to the front in the backstretch. They took the field past the three-quarter pole in 1:30.3 and then used a :30.3 closing panel to win by seven lengths over Hetties Commander in 2:01.1. Strike It Big was third.

Sent off at odds of 1-5, the homebred son of Kadabra-Pasadena Princess pushed his earnings to $79,673 with the win. He is owned by Robert McIntosh Stables Inc of Windsor, ON and C S X Stables of Liberty Center, OH.

Illseeuincourt was a maiden-breaking winner in his $15,000 division for the tandem of driver Ross Battin and trainer John Bax. The son of Deweycheatumnhowe-Maryanne K turned a two-hole trip into a narrow score over race favourite Striking Patrick in 2:04.1. Federal Strike rallied from far back to finish third.

Parkhill Stud Farm of Peterborough and Lewis Palmer f Oshawa, ON share ownership on the gelding, who lifted his lifetime earnings to $18,065 with the win. He was a $15,000 purchase from last year’s Lexington Select Yearling Sale.

Crowningcrest came out of the blocks slowly to start his career, but he’s really been on a roll in recent weeks. He nabbed a come-from-behind victory in the third division for the team of driver Scott Coulter and trainer Susie Kerwood. The son of Mutineer-Incredible Iam, who started from Post 7, swept to the lead in the lane and drew clear to win by 1-3/4 lengths over race favourite Tyrone Haji in 2:03.4. Solar Son rounded out the top three finishers.

Bred and owned by Langcrest Farm of East Garafraxa, ON, the youngster improved his record to 2-1-1 from seven starts while bumping his bankroll to $31,142.

R Choochoo Charlie was an overwhelming favourite in the fourth division, and he didn’t disappoint the army of backers that sent him off as the 1-5 choice. Trevor Henry hustled the Shane Weber pupil to the position of command and the rookie rolled through fractions of :31.1, 1:02.4 and 1:33.3 before kicking home in :29.4 en route to the 2:03.2 triumph. Runner-up Yoooukilis was 5-1/2 lengths in arrears, with Muscle Action completing the Triactor ticket.

The win improved the homebred’s record to 2-2-0 from six starts while the lion’s share of the purse bumped his bankroll to $22,214. The son of Muscle Mass-Great Expectations races for Tom and Elizabeth Rankin of St. Catherines, ON.

Ramas Last Son was paired up with Hall of Famer for the first time, and he responded with a 2:02.2 tally in the fifth division. The Ed Peconi, Jr. trainee overcame Post 7 to win in rallying fashion over Rival Seelster and Verdi.

It was a maiden-breaking score for the son of Majestic Son-Smokin Rama, who is owned by Garry Patterson of Kirkfield, ON. He’s managed to assemble a 1-1-1 record from just seven trips postward, and his cash stash now stands at $8,830.

Warrawee Promesse wrapped up the OSS festivities with his first-ever OSS tally. It was the second lifetime win for the son of Windsong Espoir-Warrawee Indy, who sat a two-hole trip to the half before brushing to the lead in the backstretch and drawing clear to a 2:03.4 decision. The margin of victory was 4-1/4 lengths over Aventure, with Passed Dat Point grabbing the show dough.

Henry Stable of Arthur and Fred Brayford of Alliston, ON share ownership on the gelding, who was purchased for $11,000 from last year’s Canadian Yearling Sale. He now boasts a 2-1-0 record from eight starts and a bankroll that stands at $16,550.