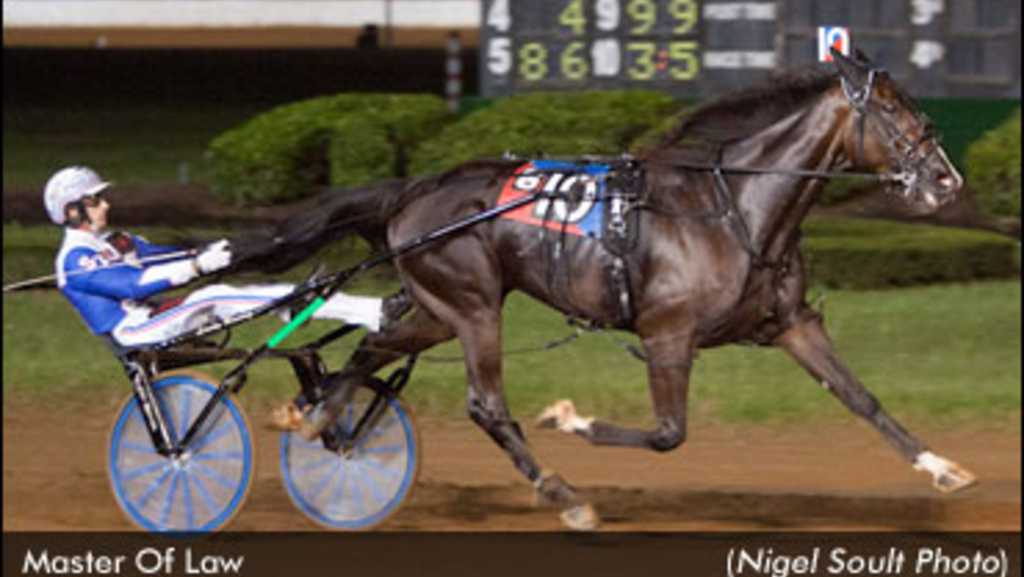 The best of racing in the Bluegrass State was on display Sunday night at The Mile as the historic track hosted the $2 million Kentucky Super Night with eight $250,000 Kentucky Sires Stakes (KYSS) finals for two and three-year-olds highlighting the program.

Included among the large crowd at The Red Mile was Kentucky Governor Steve Beshear and his wife, Jane.

Six different stallions were represented among the eight championship winners, with only Deweycheatumnhowe and Ponder having double winners.

It was a big night for Alan and Meg Leavitt's Walnut Hall Ltd. as the Lexington farm bred and own a pair of KYSS final winners in the two-year-old gelding trotter Sorrento Hall and the 3-year-old filly trotter Ma Chere Hall.

Sorrento Hall broke her maiden in her fourth career start with a 1:59 effort for driver Mike Lachance. The son of Groton Hall-SB Fuchias Image dropped in third from post nine and then moved to the lead around the final turn, drawing clear to win by two and a quarter lengths over Samburu and Trace Tetrick, with Scacco Matto and Jeff Nisonger third.

Fred Grant trains Sorrento Hall, who came into the race with just $5,550 in earnings, but leaves $125,000 richer with the winner's share of the purse.

Ma Chere Hall had no problems in capturing her $250,000 final with a career-best 1:52.3 effort for driver Corey Callahan. Rockin With Dewey and Lachance finished second, with Little Bitty Lies and Tim Tetrick third.

Jonas Czernyson trains the winning daughter of Deweycheatumnhowe-Margarita Hall for Walnut Hall Ltd. and partners Aldebaran Park Inc. and Joe Sbrocco. Ma Chere Hall was a three-time winner in 2012, including the $202,500 Kindergarten Series final at Vernon Downs, and she is now five-for-nine this year as she increased her career earnings to $351,408.

It was also a big night for Master Of Law, who had no problems with post 10 in the KYSS final for three-year-old male trotters as he cruised to a 1:52.4 triumph for driver Scott Zeron. Lauderdale and driver Callahan finished second, with Dewey Luvs Britt and Kevin Oscarsson third to complete the Deweycheatumnhowe-sired trifecta.

A gelded son of Deweycheatumnhowe-Possess The Magic, Master Of Law posted his fifth straight victory as he got away third and then made a move to the front approaching the half, taking control and never looking back in a new lifetime mark.

Trained by Frank Antonacci and owned by Lindy Racing Stable, Brittany Farms and Adam Victor & Son Stable, Master Of Law is headed next to the Canadian Trotting Classic at Mohawk Racetrack, according to driver Zeron.

Bandolito stretched his winning streak to nine in what trainer and co-owner Daryl Bier said was his last start of the year in the rich final for three-year-old colt pacers. Although Bier had been driving the son of Ponder-Sodys Home Brew, he turned the lines over to Tim Tetrick on Sunday and the decision paid off with a 1:49.4 victory. Duel In The Sun and Callahan finished second, with Phenomenon and Lachance third.

Bier shares ownership of Bandolito with his brother, Tommy, and Charles Dombeck. Unraced at two, Bandolito finished third in his career debut but hasn't been beaten since as he increased his earnings to $188,940.

Gov. Beshear presented the trophy for the KYSS final for two-year-old colt pacers and it was the connections of Last Best Chance who were celebrating in the winner's circle.

The race got off on a bad note for the heavily-favoured On Golden Ponder, who made a break for driver Lachance, but that paved the way for Tim Tetrick to go on to post the 1:56.2 victory with Last Best Chance. Proceed To Party and Tyler Smith was three-quarters of a length behind in second, with Up N At It and Doug
McNair third.

Trained by David Nelson, Last Best Chance is a son of Cambest-Pinehurst Lady. The win was his second in four starts and came after a pair of third-place finishes behind On Golden Ponder in the KYSS preliminaries. He boosted his earnings to $133,250 with the career-best victory. 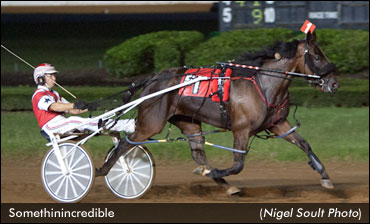 Things went much better for Lachance in the KYSS final for two-year-old filly pacers as he directed Somethinincredible to a 1:55.3 victory, besting runner-up Salsa Star and Randy Tharps by eight and a half lengths, with Magical Bestern and Jimmy Stiltner II third.

Sent off the 1-9 favourite after two easy wins in the KYSS opening rounds, Somethinincredible is a daughter of Ponder-Breathdefying trained by Bob McIntosh and owned by Robert McIntosh Stables, CSX Stables and Dave Boyle. The win was a career best as she boosted her earnings to $161,825.

"She's a pretty good filly," said Lachance. "It's easy to say she could be a Grand Circuit filly, but I think she could be. She's beautiful and good gaited."

Petticoat Affair and driver Brad Hanners romped to a seven and a quarter length win in 1:56.4 in the final for two-year-old filly trotters. KJ Brenda and Lachance were second, with Dress For Success and Callahan third.

Bobby Brower trains and co-owns the daughter of Valley Victor-Katie Hall with Mystical Marker Farms. The career-best win was Petticoat Affair's fourth in a row in six career starts, increasing her earnings to $160,063.

KZ Beach Girl was a 1:53.2 winner in the KYSS final for three-year-old filly pacers with Chris Page driving for trainer Steve Carter. So Nice and Peter Wrenn were second, with Diligent Prospect and Callahan third.

A daughter of Jennas Beach Boy-Artical, KZ Beach Girl is owned by Peggy and Steve Cater, Chuck Grubbs and RB Reid. The win was her fifth of the year and a career best, increasing her earnings to $220,825.