Vintage Master, who was scheduled to compete in this Saturday's $780,000 Canadian Pacing Derby at Mohawk Racetrack, has been withdrawn 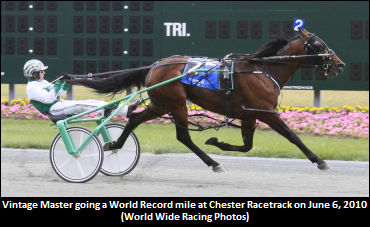 According to a release from the Woodbine Entertainment Group, the four-year-old son of Western Ideal--Vintage Art was scratched after having spiked a fever.

Vintage Master was one of three horses to accept a bye straight into the final after he last competed in the Peter Haughton Memorial on August 20 at the Meadowlands Racetrack. He had received the bye on the strength of his $377,000 in winnings this season.

Taking his place in the 'Derby' final will be millionaire Dali, who will start from Post 9 for driver Luc Ouellette. He finished eighth in last Saturday's single elimination at Mohawk.