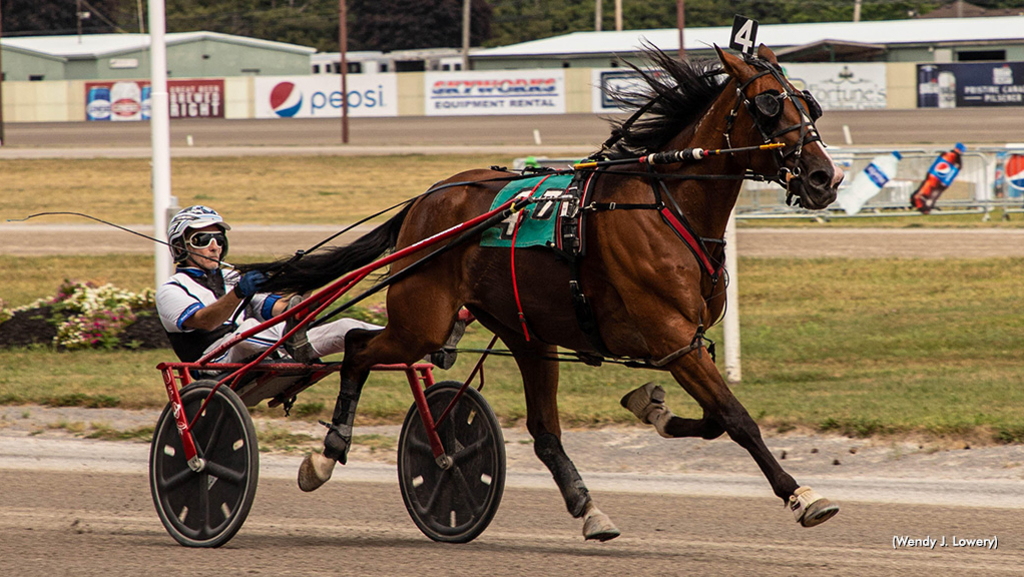 After coming up a mere neck short of victory in the top class at Batavia Downs last week, Dewey Arnold bounced back and made sure that didn’t happen again with a decisive gate to wire romp in track record time in the $15,000 Open I Handicap Trot on Sunday (Aug. 7). Driven by Kevin Cummings, Dewey Arnold was only one of five winners guided to victory by the red-hot reinsman during the afternoon.

Cummings bolted to the lead with Dewey Arnold and maintained a three length advantage over Keystone Apache to the quarter in :28.3 and the half in :57.4. Keystone Apache closed the gap slightly as they straightened for the backside dash, but Dewey Arnold heard hoofprints and trotted on, opening four lengths at three-quarters in 1:26.1. As they headed into the final bend, the field had taken a knee and Dewey Arnold was on his own. He straightened for the line and trotted home under wraps to a 4-1/2-length victory in 1:55.1.

The time of 1:55.1 was a Batavia Downs track record for aged trotting geldings, supplanting the 1:55.2 previously registered by Lutetium in 2015. Trained by David Dewhurst, this is the second trainee of his to set a track record at Batavia over this past year after the Open pacing mare Racine Bell scorched the oval in 1:51.3 on Aug. 4, 2021, setting a new mark for aged distaff side-wheelers. That clocking was also the second-fastest pacing mile of all time at Batavia, behind only Aracache Hanover’s 1:51.1 set in 2011.

A 12-time winner of $257,745 in purses last year as a three-year-old star of the New York Sire Stakes circuit, Dewey Arnold has come back at four to be a top Open-class trotter with now seven wins and $74,575 earned this year for owners Philip Hale and David Dewhurst. He paid $4.10 to win.

The undercard $14,000 Open II Handicap Trot went much like the headliner as Lunar Credit led at every station to score an upset in his first win of the Batavia meet.

Jimmy McNeight Jr. went right to the front with Lunar Credit as All About Thechase tucked and followed in the pocket. With a weak and early outside challenge from Art Of Duty, Lunar Credit proceeded through workman-like fractions of :28.4, :58.1 and 1:27.1 and had a three-length advantage heading into the last turn. McNeight then line-drove Lunar Credit down the lane and held off late charges by the tripped-out All About Thechase and a fast-closing C R Blazin Beauty to win by 1-3/4 lengths in a season’s best 1:57.1. 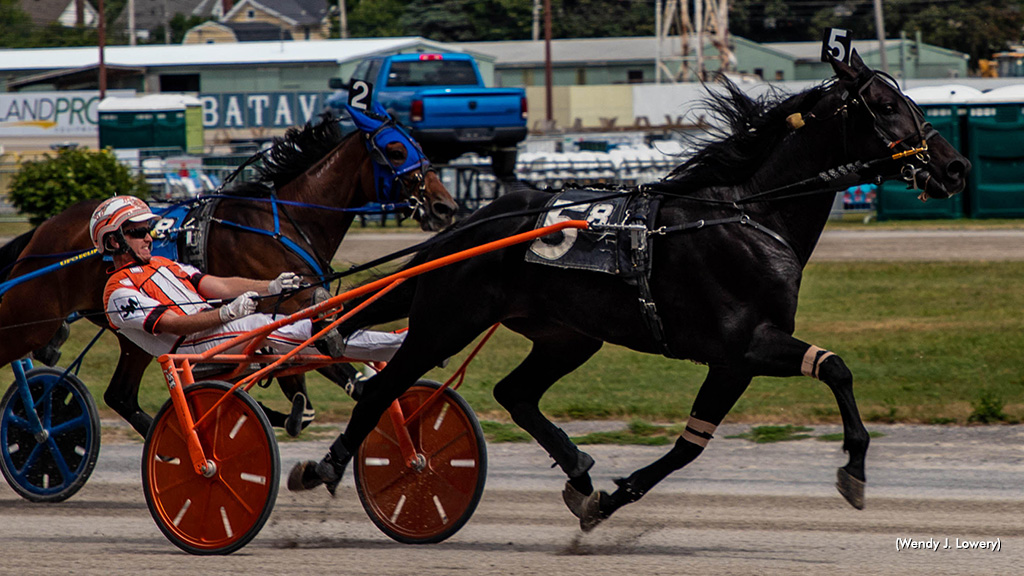 It was the second win in only six starts this year for Lunar Credit, who is owned by his driver and trained by Jim McNeight. He paid $29.20 to win.

Jimmy McNeight Jr. also had a big day in the bike, scoring the hat trick on Sunday.

Live racing resumes at Batavia Downs on Wednesday (Aug. 10) with post time at 6 p.m. Free full past performance race programs for all live race days can be downloaded by visiting the track's website and clicking the "Live Racing" tab.