Success on the first Saturday in August isn't foreign to Atlanta, as the 2018 Hambletonian winner found the winner's circle on 2021 Hambletonian Day with a stellar effort in the Dr. John R. Steele Memorial Trot. 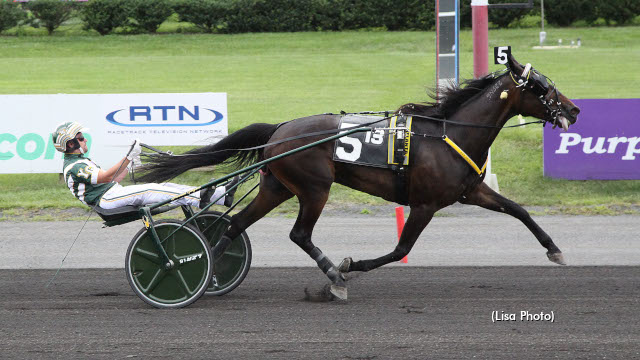 A strong field of seven trotting mares was assembled for the 2021 Steele Memorial, but Atlanta was not impressed by her competition. Driver Yannick Gingras dropped into fourth as When Dovescry (David Miller) sprinted past Hypnotic Am (Brian Sears) to hit that opening quarter in :27. No movement allowed Miller to slow the tempo for a :56.2 half as Atlanta started her first-over grind. Gingras ratcheted up the pressure through that third quarter and forged to the front around that final turn. Straightening out at the head of the lane, Atlanta opened up her lead with every stride and the talented trotter pulled away confidently to win by four in 1:50.4. Felicityshagwell S (Ake Svanstedt) found a seam to close for second ahead of Next Level Stuff (Tim Tetrick).

"She's been super really all year, except for last week," noted Gingras in the winner's circle." Two starts back she got beat but that was more trip-wise because I got away so far back. Last week, in the post parade I knew she was no good. She wouldn't grab onto the bit for me and she just wasn't quite sharp. They found some things wrong after the race and good job on the Burke Brigade to turn her around in a week."

Ron Burke trains Atlanta (Chapter Seven - Hemi Blue Chip) for Ontario's Brad Grant, Crawford Farms Racing, of New York and Howard Taylor of Pennsylvania. The six-year-old sports a summary of 3-1-0 in five seasonal starts and the win lifts her over the $3 million mark in lifetime earnings.

The Dr. John R. Steele Memorial is part of a stakes-packed card of harness racing on Hambletonian Day. Be sure to check out the 2021 Hambletonian Day News Centre for recaps and replays of all the action.