Whenuwishuponastar To L A Delight 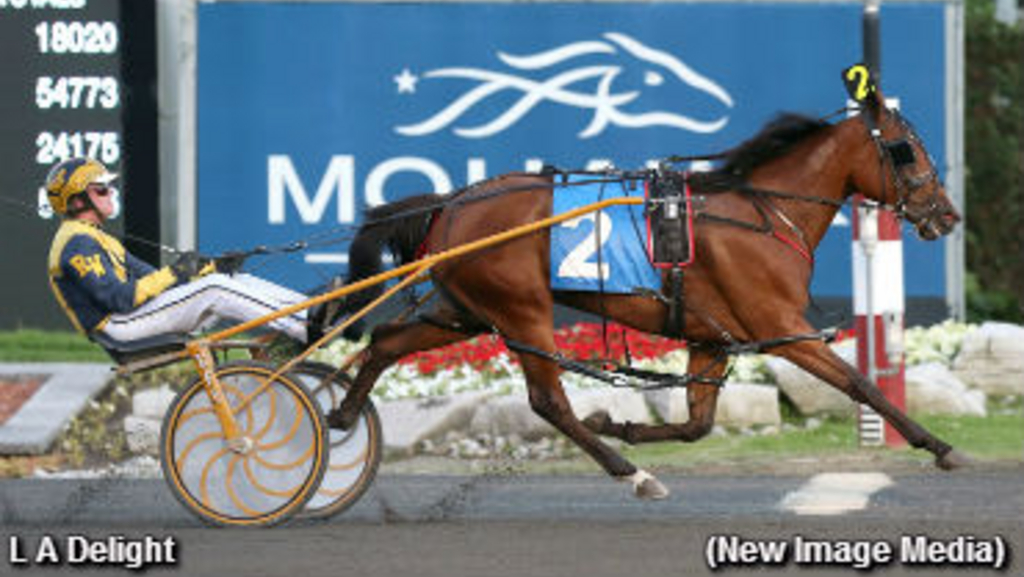 L A Delight extended her winning streak to four-in-a-row thanks to a dominant performance in Thursday’s $36,800 final of the Whenuwishuponastar Series for two-year-old pacing fillies.

Randy Waples got away second with L A Delight, who stalked Shes Lights Out to the quarter pole in :28.2 before popping the pocket and taking command. L A Delight cleared to the top with the greatest of ease and she controlled the tempo through middle panels of :58 and 1:26.1. She kicked home in :27.3 to win by 4-1/4 lengths over Bad Lightning. Third prize went to Shes Lights Out.

“It looked like that (a training mile), but take them however you get them,” said Al McIntosh, co-owner of L A Delight following the race. “We are very pleased with the way she’s coming now and it looks like better things could be ahead.”

Bob McIntosh trains the homebred daughter of Bettors Delight-West Of L A for Robert McIntosh Stables Inc, C S X Stable and Al McIntosh Holdings Inc. The victory improved her record to 4-0-1 from five assignments and the lion’s share of the loot lifted her earnings to $70,080.

Thursday’s card also featured the opening leg of the Define The World Series for two-year-old trotters, and Bucketlist Hanover snuck up the rail late to win the lone division in 1:57 for driver Randy Waples.

The Brad Maxwell trainee got away fifth and he held that position while race favourite threw down first-half fractions of :29.2 and :59. Blenheim was still in charge at the three-quarter pole in 1:28.1, but he drifted on the rail in the lane allowing Waples to shoot through with Bucketlist Hanover. The colt fired home in :27.4 and won by a half-length margin over stablemate Deep Impact. Lean Hanover rounded out the Triactor ticket.