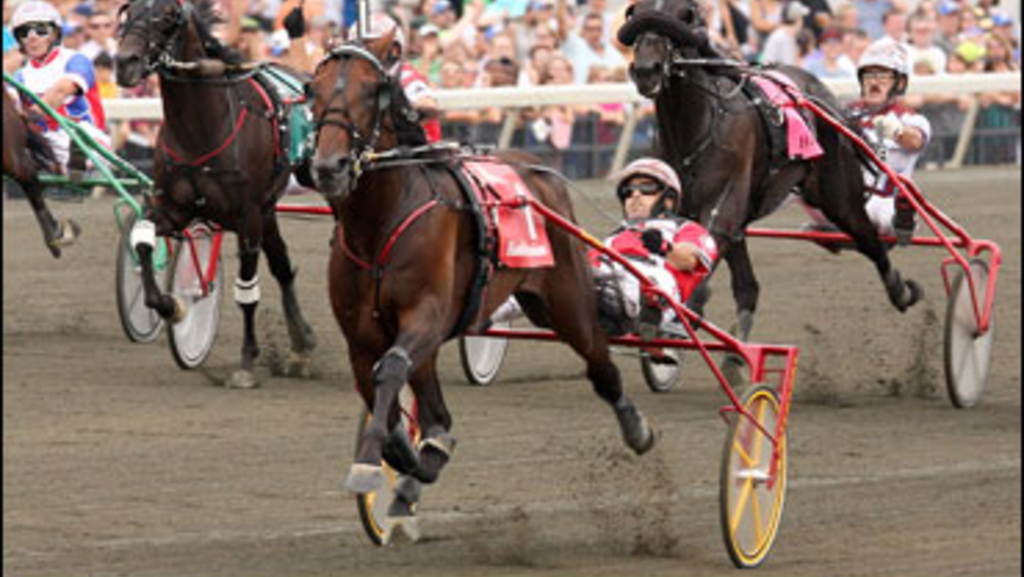 In a strong gate-to-wire performance, Broad Bahn was a decisive winner in the 2011 Hambletonian over Canadian entrant Whiskey Tax (Randy Waples)

Just before the start, Magnum Kosmos broke stride leaving nine horses on the gate. Randy Waples left alertly for position with Whiskey Tax and as expected, Broad Bahn and driver George Brennan rocketed out from the rail and was on point into the first turn with Whiskey Tax in second and Luckycharm Hanover (David Miller) in third past the opening :27.1 first quarter.

The key to the race was the next quarter: a :28.4 breather to reach the half in a well-rated :56. Manofmanymissions (Andy Miller) started to stalk from first over and made up ground through the accelerated 1:23.4 third panel but as the field hit the stretch The Minister Of Speed asked his charge for more and Broad Bahn responded. Manofmanymissions was not up to the challenge as he rolled offstride. Waples did a great job in steadying the pocket-sitting Whiskey Tax and keep him trotting for a run at the leader but it was in vane as Broad Bahn was a comfortable three length winner in 1:53. Opening Night (John Campbell) closed well for third. 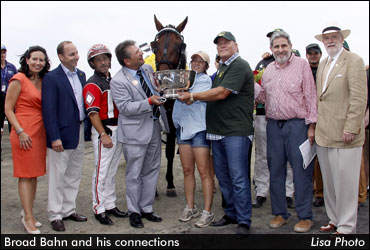 It was a rare double on harness racing's greatest day for driver George Brennan, winning both the $1.5 million Hambletonian and the filly companion event, the $750,000 Hambletonian Oaks one race earlier with Bold And Fresh.

"It's exactly what I thought, if I cut and get good fractions I thought we were good," said Brennan after the victory. "I felt really good when I asked him for trot throughout the mile. I asked Noel before the race how he was, he said 'awesome', and he was right."

"It doesn't get much better than this," said trainer Noel Daley, who finished second to Muscle Hill in the 2009 Hambo with Explosive Matter. "Everything worked out well for us today.

"He's got a very good attitude, you have to be lucky as well as good and we've had no issues," continued Daley. "I was very confident coming in. I left the trip up to George, he's had a great day."

"It looked like all day the front didn't hold up, I was extremely worried," noted agent Ole Bach, who recommended Broad Bahn to his current owners. "When I saw the :56 half, I said 'thank God'. He's a big locomotive and he kept the steam going."

"Watching the race I was elated. I was thrilled when he landed in the two hole behind Broad Bahn," Durand told Trot Insider. "I knew my horse wouldn't run out of gas and I was hoping for a little more racing room.

"Randy thought he had a chance to get it. I knew my horse was good but I didn't know how good. I'm happy with second."

Great to see Randy Waples finally entering a new chapter in his carreer; taking on the best of the best outside of Ontario. Hope he gets more opportunities in the years to come to showcase his great talent.

Randy gave Whiskey tax a perfect drive guiding a 39-1 shot to a 2nd place finish. I also believe that he lost a lot of momentum in the lane when he was interfered with and would have been a lot closer. In his other drive on San Pail he once again gave a perfect steer to win the race, one could almost be led to believe that he could indeed fit in at the big m. I have to believe that if he had of drove one more horse i will not mention any names that he no doubt would have had 2 wins and one 2nd place finish on the day. It may be time that drivers like Randy start to get shown the respect that they have earned. You do not have to be based out of the US to be capable of winning a big race.

Congratulations to Tom Durand and Randy Waples. The drive by Randy was perfect. Whiskey Tax seemed to have been bothered by the outside horse breaking near him. I think that Whiskey Tax could have been closer or even win the race. C'est la vie!

Finishing second is good considering that this is a prestigious race.

Randy Waples did a top notch

Randy Waples did a top notch job with, "Whiskey Tax", in the,"Hambo". Got the most out of him with an aggressive steer that gave the horse good early positioning. Second place is no disgrace in a race of such magnitude!