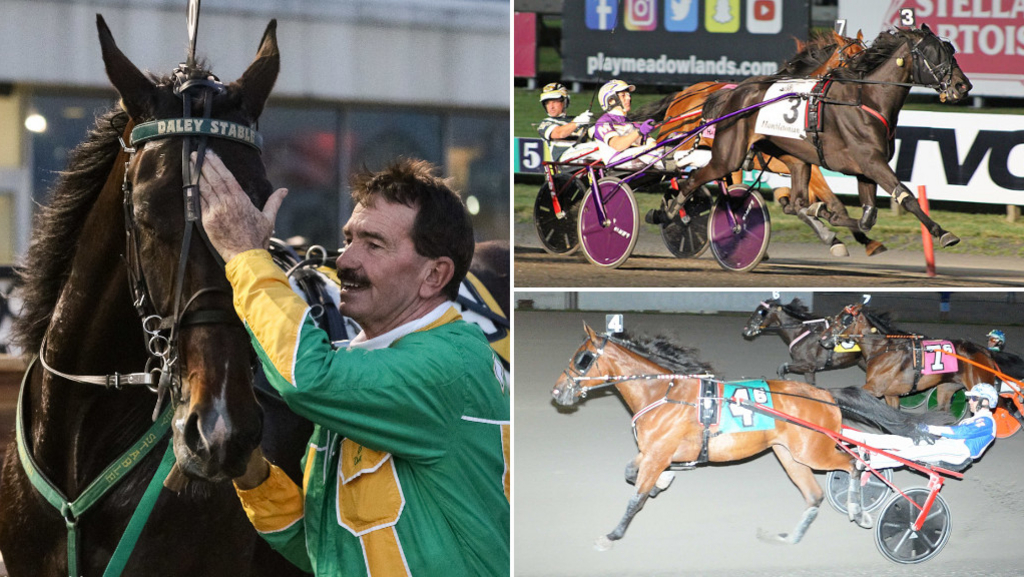 If Yanaba does not find success in Saturday’s $500,000 Hambletonian Oaks, it will not be for lack of effort.

“Her best quality is that she tries,” said Dan Daley, trainer of the three-year-old filly. “She tries hard. I think it was a little surprise she got home so good (last week), but she will dig right to the wire. She’s a good horse.

Yanaba won’t have to beat the world Saturday at The Meadowlands in East Rutherford, N.J., to help fulfill one of Daley’s dreams — winning a Hambletonian race.

She proved how good she can be last week, finishing a surprising second behind Venerable in her elimination of the Hambletonian Oaks. Yanaba went off as a 69-1 longshot. She sat fifth until the head of the stretch after starting from the rail and finished three-quarters of a length behind the winner.

A total of 16 horses entered the Hambletonian Oaks, the filly companion event to the Hambletonian. Venerable, 9-5 favourite in the final, was the 2021 Dan Patch and O’Brien Award winner for top two-year-old filly trotter.

The top-five finishers from last week’s two, eight-horse $40,000 eliminations advanced to the final. Warrawee Xenia won the other elim.

Yanaba, a daughter of Trixton-Zanna Royal, will have a new driver in the final as Brian Sears hops on the bike after Andrew McCarthy chose to drive Mon Cheval in the race. Sears, a Hall of Famer, has three Hambletonian wins, leading all active drivers, and two Hambletonian Oaks victories.

Daley said the driver change will not alter he and or Yanaba’s charge.

“She was 60-1 last week because she was filthy the week before in an overnight race in New York,” he explained, noting the filly battled a little sickness and stiffness. “It was an easy fix for me. She’s fixed and worked out well. I’m excited. I always thought she was a real good filly.”

Daley, who resides in Lake Worth, Fla., is making his Hambletonian Oaks debut. He has started five horses in Hambletonian eliminations, most recently in 2006 with RC Royalty.

In his career, Daley has won more than 1,300 races and $15 million in purses as a driver. He has more than 900 victories and $14 million as a trainer. He splits his time between Florida and upstate New York, where he has enjoyed success on the state’s sire stakes circuit for years.

Daley was inducted into the Florida Harness Racing Hall of Fame in 2018.

In addition to training horses, he has played polo and participated in showjumping. In 1976, at the age of 17, he rode from New York to California as part of the Great American Horse Race, which was created to celebrate America’s Bicentennial.

His son, Dan Jr., is a state representative in the Florida legislature.

He continues to chase the ultimate victory.

Ann-Mari Daley, one of Yanaba’s owners, is the wife of trainer Daley. She, along with fellow owners Jared Daley and Oleg Ivutin, are looking for their first Hambletonian Oaks victory.

Ann-Mari Daley said the focus is on Yanaba, who is 8-1 on the morning line, and her husband.

Yanaba — which means “she meets the enemy” and is of Native American origin — and Dan Daley seem primed for the challenge.

“This a dream Dan has been waiting for to come true,” Ann-Mari said. “Yanaba seems to be at the top of her game coming into the race.

“We have horses but we’re the little guy. We have a lot of friends who have big stables. This is Dan’s dream and the Hambletonian races are his dream races.”

Venerable is the 9-5 morning-line favourite in Saturday’s $500,000 Hambletonian Oaks and will try to give conditioner Richard “Nifty” Norman his fourth win in the event for three-year-old female trotters. With a victory, Norman would take over sole possession of third place for the most triumphs by a trainer in the race, breaking a tie with Glen Garnsey. Jimmy Takter holds the record with eight followed by Jan Johnson with six.

David Miller will drive Venerable, leaving from post five in the 10-horse field. Norman and Miller teamed for an Oaks win in 2012 with Personal Style.

“A couple of guys asked me about the time and the fractions, but if you look at the card (last Saturday), the times and the fractions haven’t been good. And the front end hasn’t been good. Some good horses got beat on the front. The track is a bit deep, not that fast. So, I thought her run was fine. She’ll be good (for the final).”

Venerable went off stride in her second start of the season in the New Jersey Sire Stakes championship, but in her remaining five races has three wins, a second and a third.

“I just think she wasn’t ready, didn’t have her head in the game,” Norman said about the break in the NJSS. “She’s never looked like doing that again. It wasn’t physical, it wasn’t anything I was concerned about.

“Her run in the Zweig Consolation (winning in 1:52.2) was a good run. Then her second to Joviality S (in the Miller Memorial) was a good run, she was still coming at the wire. I just think she’s been getting a little better all the time.”

Venerable, a daughter of Walner-Jolene Jolene, received Dan Patch and O’Brien awards in 2021 for best two-year-old filly trotter of the year. Award winners have done well on Hambletonian Day in the recent past, with Ramona Hill capturing the 2020 Hambo and Manchego and Ariana G taking the Oaks in 2018 and 2017, respectively.

For her career, Venerable has won 12 of 17 races, hit the board an additional three times, and earned $1.26 million for owners David McDuffee, Mel Hartman, Paul Bordogna, and Steven Arnold.

After a week off ahead of the Oaks elims, Norman expects Venerable to be ready to go in Saturday’s final.

“Usually, it’s good doing it this way,” Norman said. “That’s how we planned it out. Hopefully, it comes to fruition. You always need luck.”

Nothing went right for Bare My Soul last year at age two. Trainer Linda Toscano is hopeful that has changed this season.

Bare My Soul finished third in her Oaks elimination, a length behind winner Venerable. She is 15-1 on the morning line for the final and will start from post two with Yannick Gingras in the sulky. Gingras is the leading driver in the history of the race, with six trophies.

Last year, Bare My Soul won once in seven tries. This season, the daughter of Chapter Seven-Celebrity Angel has hit the board in five of seven starts, winning two. Her victories were both on the New York Sire Stakes circuit.

“She was talented last year, but I mismanaged her terribly,” Toscano said. “I don’t normally; normally I pride myself on being able to manage one really well. (But) no matter what I did, I did it wrong. This year, we’re trying to cross every T and dot every I.

Bare My Soul, sent off at 38-1, started her elimination from post seven and left the gate quickly to put herself second at the quarter.

“It wasn’t totally surprising to me because I know she’s really talented and she’s really good gaited, and I knew she could get off the wings like that,” Toscano said. “Yannick gave her a picture-perfect trip. He said if he could have found a clear lane, he might have been second with her. I was really happy with her. I knew she wouldn’t embarrass herself.”

Bare My Soul is owned by Richard Gutnick, Tom Pontone, Joseph Lozito Jr., and Enviro Stables. Toscano, who won the 2012 Hambletonian with Market Share for an ownership group that included Gutnick and Pontone, is hopeful Bare My Soul’s talent comes to the forefront again Saturday.

“She can leave the gate and she can put herself in position,” Toscano said. “With a trotter, there is nothing better than that.”