The parade of winners for trainer Jimmy Takter continued in the $330,800 Jim Doherty Memorial for two-year-old trotting fillies with undefeated Manchego extending her win streak to five. 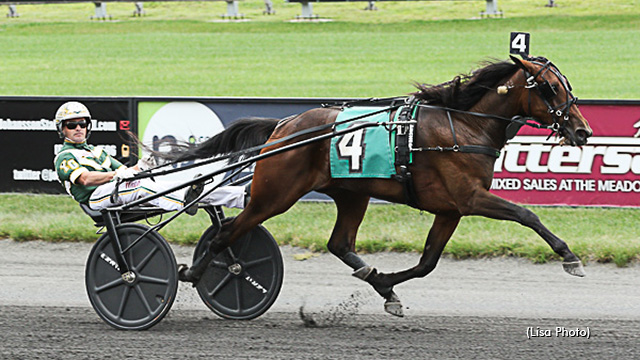 Dab Hanover (Jimmy Takter) and Lily Stride (Tim Tetrick) dueled for the early lead, with the latter pocketing up and settling off the front end. Manchego sat third for Yannick Gingras through the sensible :28.2 opening quarter, but right-lined down the backstretch and cleared to the top before a :56.4 half.

Lily Stride was flushed from third and forced first up by Vivacious Allie (David Miller), with second choice and elim winner Phaetosive (Trond Smedshammer) a gapped third over. Manchego continued strongly on the front end through a 1:25.1 third panel and started to pull away from the first over challenger turning for home. Phaetosive looked full of trot and started to make up ground but Manchego was a confident two-length winner in a lifetime best 1:52.4. Lily Stride stayed for third.

“She is a really special girl. We liked her from the get go and she keeps developing and certainly has a very effective way of going and has a tremendous inner-strength that few horses have,” said Takter, who recorded his fifth win in the Doherty, formerly named the Merrie Annabelle. Takter and Gingras most recently teamed up to capture the 2016 Doherty with this year's Hambletonian Oaks favourite Ariana G.