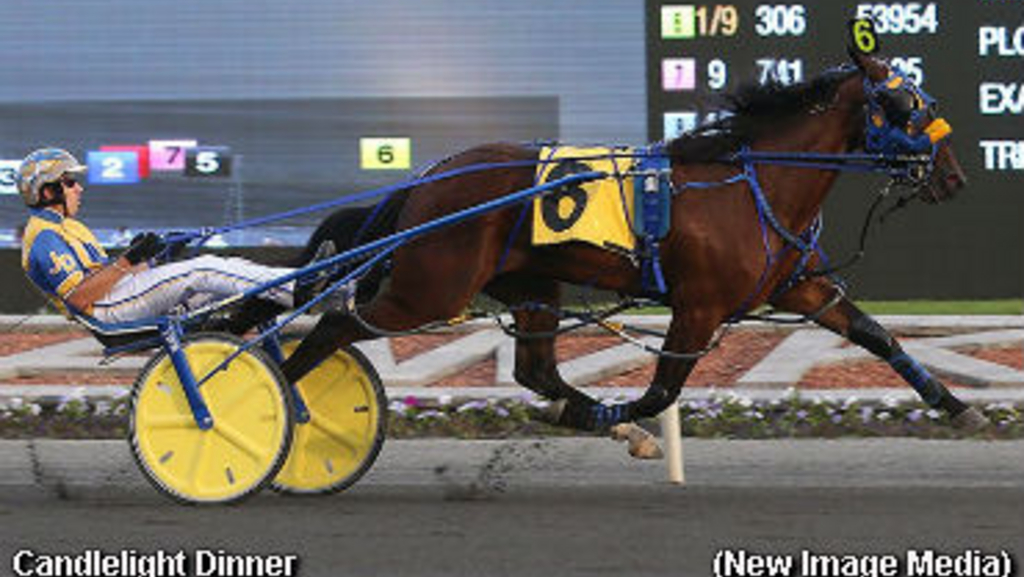 Trainer Casie Coleman has had her fair share of world class fillies, and it looks like Candlelight Dinner wants to add her name to that list.

The two-year-old daughter of American Ideal-Time N Again crushed the foes she faced in Thursday’s $39,800 final of the Whenuwishuponastar Series Final at Mohawk Racetrack, and in doing so pushed her record to three wins in as many tries.

Candlelight Dinner got away fifth for driver Jonathan Drury, who watched Black Jat Pat, Touching Thought and Warrawee Star battle to the quarter pole in :27.2. Touching Thought cleared and was quickly overtaken by Warrawee Star, and just as things settled Drury pulled the trigger out of fifth with Candlelight Dinner. She blasted her way to the lead at the half in :56.4 and proceeded to lead the way past the three-quarter pole in 1:24. She rumbled home in :28.2 in wrapped up fashion en route to the five-length tally over Black Jack Pat in 1:52.2. Moment To Ponder was third.

“Right from the get-go she has just been a sweetheart,” said Coleman. “She got a little hot on me like most Americna Ideals can, but we taught her out of that right away, that’s why J.D.’s (Jonathan Drury) been racing her the way he is. He’s handled her really well, teaching her how to race when she is a dead favourite.”

Sent off as the 1-9 favourite, Candlelight Dinner pushed her bankroll to $33,900 with the win for partners Mac Nichol, Let It Ride Stables Inc and Howard Taylor. The group shelled out $110,000 to purchase the filly from last year’s Lexington Select Yearling Sale.

Earlier on the card Seven And Seven broke his maiden for trainer/driver Tom Durand in the opening leg of the Define The World Series for two-year-old trotters.

A short field of five went postward in the lone division, and the majority of the road work was done by Cant U Spell. She took charge from Post 5 and carved out splits of :29.4, 1:00.2 and 1:29.1 before coming under attack. Race favourite AWOL Hanover rallied out of the pocket while Seven And Seven went on the offensive from third after being treated to a ground-saving journey throughout. Seven And Seven’s closing quarter speed of :28 propelled him to the win by a length over AWOL Hanover, with Cant U Spell setting for the show dough in the $14,000 affair.

The homebred son of Chapter Seven-Ally Oop has banked $8,120 in his first two appearances for Tom and June Durand along with partner Allan Smith of Oakville, Ont.