The top two and three-year-old trotters and pacers in the Hoosier state were in the spotlight at Hoosier Park Racing & Casino on Wednesday, August 2 to battle it out in the $75,000 Indiana Sires Stakes Finals.

Over $630,000 was up for grabs on the evening’s 14-race card and featured six $75,000 Indiana Sires Stakes final for the two and three-year-old divisions.

The three-year-old trotting colts and geldings kicked off the action-packed evening and it was Swan Chase and driver John DeLong who found the winner’s circle for the second consecutive week. After winning his elimination last week, Swan Chase used a ground-saving trip to best his rivals by a length, scoring in a new lifetime best of 1:55. 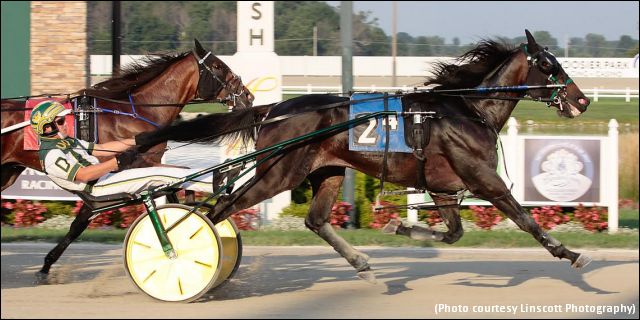 Swan Chase sat third along the rail through splits of :28.3, :57.3 and 1:26.4 before utilizing a :27.4 final quarter to track down the heavily-favoured My Uncle Cuz and Don Harmon late in the lane. My Uncle Cuz had to settle for second-place honours while Double A Goldrush and Ross Leonard rallied gamely late in the lane to round out the trifecta.

“They gelded him a few weeks ago and I think that has really made a big difference in him,” DeLong noted after the victory. “He is a little more manageable this way and seems to be getting better with every start.”

Trained by William Crone, the son of Swan For All-Precisionist notched his sixth win from 11 seasonal outings. Owned by John Barnard, Swan Chase has now won nine of 22 lifetime outings while bankrolling $177,716 in lifetime purse earnings.

Satin Dancer, driven by Ronnie Wrenn Jr., looked every bit the part of a 3-5 favourite in the $75,000 Indiana Sires Stakes Final for three-year-old trotting fillies, as she stopped the timer in 1:56.1. Benefitting from a pocket trip, Satin Dancer sat patiently through splits of :28, :57.3, and 1:27.1 before Wrenn Jr. gave her the green light. Utilizing a :28.3 final panel, Satin Dancer coasted on to the wire under a hand drive to finish a length in front of the front-running Ajessia and Doug Rideout.

Trained by Byron Hooley, Satin Dancer recorded her fifth win from eight seasonal outings. The daughter of Big Stick Lindy-Shaken Not Stirred is owned by Summit Pacing Acres LLC and now sports a lifetime bankroll of $368,808.

“I didn’t know how things would go in here as far as the trip was concerned,” Wrenn noted after the victory. “She’s a classy filly, still a little green, but that was a great trip for her. She really raced great tonight.”

Owned in partnership by Kales Co., Dolne Fm Services, S&R Racing Stables, and Wrenn Racing, Rockin Serena notched the second victory from eight trips behind the gate in 2017. The daughter of Rockin Image-Day Lily Hanover has won four of 13 lifetime outings while earning $117,205 in purse earnings.

Rock N Tony turned in a gritty performance to find the winner’s circle in the $75,000 Indiana Sires Stakes Final for three-year-old pacing colts and geldings. With Trace Tetrick in the bike, Rock N Tony was able to overcome a long, first-over grind to wear down the heavily favoured Beckham’s Z Tam and Ricky Macomber Jr. late in the lane and stop the timer in 1:50.4. 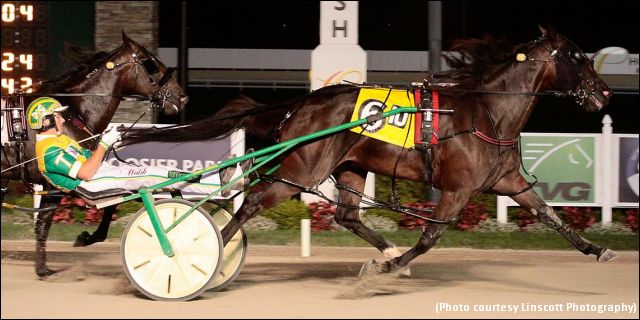 “He’s all heart,” Tetrick noted after the victory. “Not the ideal trip, they rushed me early and I had to pull. He was able to overcome it and grinded all the way to the wire. He’s a very honest colt that loves his job.”

Trained by Erv Miller, the three-year-old gelded son of Rockin Image-Pandemonious recorded his fifth seasonal victory and eleventh lifetime win from 17 starts. Owned by Anthony Lombardi and Rocco Ruffolo, Rock N Tony pushed his lifetime earnings to $354,912 with the victory.

The two year-old fillies were in the spotlight in the very next race, and after a disqualification of the heavily-favoured Dee Rocks and Sam Widger, Ezpay and Brandon Bates were declared the winner in the $75,000 Indiana Sires Stakes Final for two-year-old pacing fillies. With a final time of 1:54, Ezpay found the winner’s circle for just the second time in her young career and established a new lifetime best in the process.

Trained by Pete Leu, who co-owns the filly with Heidi Estep, the daughter of Jeremes Jet-In The Red has now amassed $58,900 in purse earnings from five seasonal starts.

The freshmen pacing colts rounded out the stakes action for the evening, and with a winning streak on the line Shnitzledosomethin delivered as the heavy favourite in the $75,000 Indiana Sires Stakes Final for two-year-old pacing colts and geldings. With regular pilot Peter Wrenn at the lines, Shnitzledosomethin turned a pocket trip into a 1:52.2 score. With the win, the rookie colt equalled his lifetime best and remains undefeated in four lifetime starts. 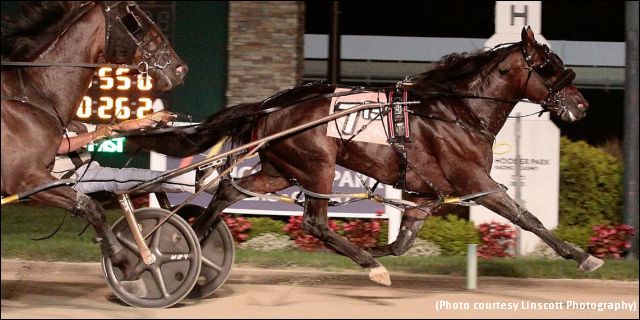 “I knew I wanted to race him off a helmet tonight,” Wrenn said in the winner’s circle. “It couldn’t have worked out any better for us. He’s still learning and figuring everything out but he’s a nice, nice colt.”

Trained by Dylan Davis, the son of Fred And Ginger-Summer N Sand has now won all four of his lifetime outings. With the win, Shnitzledosomethin has bankrolled $67,250 in lifetime purse earnings for his connections of BFJ Stable, T. Lazzaro, E. Gold, and A. Basen.

Live racing at Hoosier Park Racing & Casino will continue on Thursday, August 3 with a 14-race card. First-race post time will be at 6:30 p.m.