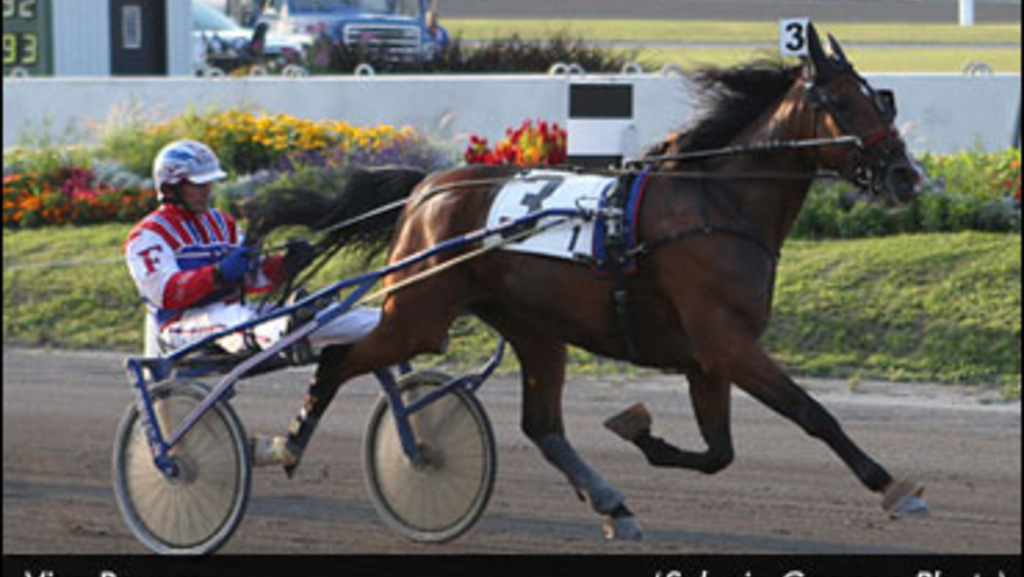 Competing in a $7,500 division of the Quebec-Bred Series for trotters and pacers, trainer/driver Yves Filion allowed his filly by Muscle Mass to follow pacesetter Y S Majestic Girl (Stephane Brosseau) through fast early fractions of :28.4, :59 and 1:29.3 to the three-quarters.

Then moving out to take the lead by the top of the stretch, Viva Bayama pulled away in the stretch to win by two and one-half lengths in a time of 1:59.2. Y S Majestic Girl held for second with Lucyll Bro (Stephane Gendron) third. Viva Bayama paid $2.60 to win.

It was a lifetime mark for Viva Bayama, who was bred and is owned by Filion’s Bayama Farms of Saint-Andre-D'Argenteuil, Que., and her time surpassed the previous track mark of 2:00.1 that was originally set by Emilie Cas El in 1995.

The fastest mile of the five divisions was set in the eighth race for three-year-old pacing colts and geldings when Atomic Million AM missed tying the track record by one-fifth of a second with his 1:53 triumph.

Driver Sylvain Lacaille sent Atomic Million AM right to the lead with Hall Bro (Stephane Brosseau) sitting right on their backs through fast fractions of :26.4, :56.2 and 1:25.1. Hall Bro, who was on a three-race winning streak, tried his might but could not catch Atomic Million AM as he kicked in a :27.4 last quarter mile to win by a half-length. Bali (Marie Auger) was third.

The win was the ninth in 12 starts this year for the gelded son of Million Dollar Cam, who is owned and bred by Ferme Alain Martin of Gatineau, Que. He paid $3.60 to win.

There were two $7,500 divisions for three-year-old pacing fillies and the fastest division went to Champagne Shower and driver Denis St Pierre. They led from start to finish in 1:56.4, romping by five and one-half lengths over Bemmol Kalie (Melane Plourde) and C L Infinite (Marie Auger).

The win was the fourth straight for Champagne Shower, a daughter of Santana Blue Chip trained by Helene Fillion for Sotirios Anastasopoulos of Sainte-Therese, Que. She paid $2.40 to win.

The first division saw Tango Bayama come from off the pace for driver/trainer Rheo Filion to win by three-quarters of a length in 1:59.1. Ladylyonne (Stephane Brosseau) was second with Canbec Lindor (Denis St. Pierre) third.

It was a maiden victory for the filly by No Pan Intended after 15 career starts. She is also owned by Filion and paid $8.40 to win.

In the seventh race division for trotting colts and geldings, Maximuscle and driver Mario Charron led from start to finish with an easy victory by two lengths in 1:59.3. Andovers Touch (Stephane Brosseau) was second with Monster Mass (Claude Larose) was third.

The win was the fifth in seven starts this year for the son of Angus Hall. Eric Valiquette trained Maximuscle for owner/breeder Ecurie Provoquante of Mirabel, Que. He paid $2.90 to win.

This was the final of four preliminary rounds of competition in the Quebec-Bred Series. The top eight point earners in each division will now return to the Hippodrome 3R on Sunday, September 7 for the $65,000 finals.