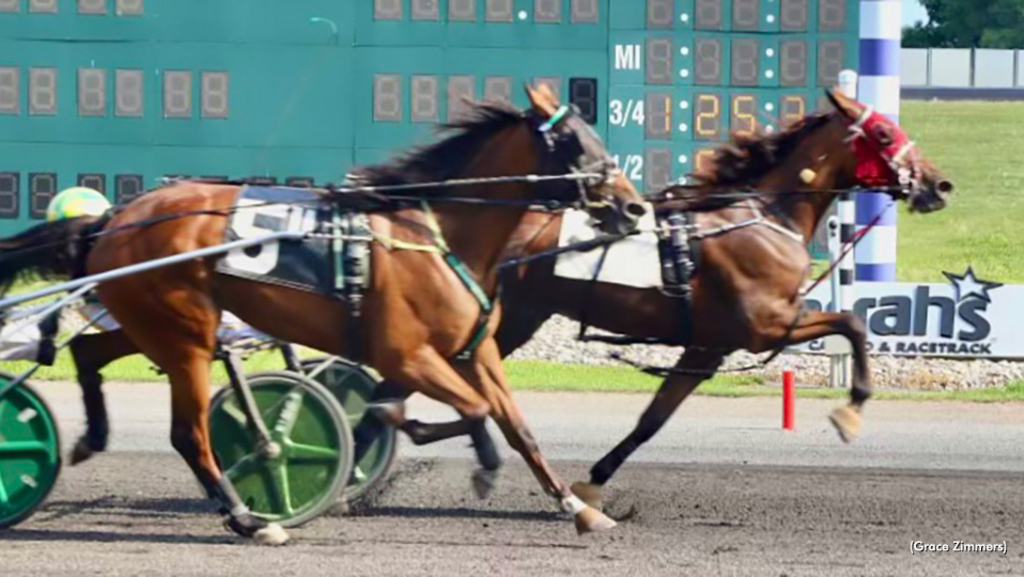 The two winners of the $73,635 divisions of the Pennsylvania Sire Stake at Harrah's Philadelphia for two-year-old trotting fillies both signaled their readiness for next Sunday’s Championship at Harrah’s Philadelphia by taking lifetime marks in this Sunday afternoon’s (Aug. 28) successes.

Faster by a tick was the Cantab Hall-No Im Not miss Cando Volo, who sat in the pocket behind Angelpedia and her factions of :27.2, :56.3 and 1:25.3. She then came on to catch that filly by half a length in 1:55.2 on a day where being on or near the lead was greatly helpful to a horse’s chances of success. Corey Callahan, who also won two Stallion Series divisions, drove Cando Volo for trainer Vernon Beachy and owner Ryan Smith. The winner was the only non-favourite in the seven stakes races of the day to win – in fact, she was the longest shot on the board, paying $32.00.

In the other division, the Donato Hanover-Motivational miss Portulaca captured the top spot among her preliminaries’ point winners with her third win in five starts, this one in 1:55.3. Montrell Teague kept the Kathleen La Montagne-trained filly, which she co-owns with Donald La Montagne, in the two-hole almost all the way through fractions of :28.3, :57.2 and 1:26.3. They then popped out near three-quarters, went to the lead, then held off a late bid by Tipsy Moni by 1-1/4 lengths.

Aside from their all being favourites, there were several other interweavings in the connections of the five $20,000 Stallion Series winners. For the aforementioned Corey Callahan, the faster of his two Stallion winners was the Bar Hopping-Snowflake Hanover filly Totally Relentless, maximizing her talent to take a 1:57.1 maiden mark for trainer Linda Toscano and the ownership of Richard Gutnick, Thomas Pontone and R-And-I Farms LLC.

“Captain Corey” (yes, the 2021 Hambletonian winner was named after him) also scored with the International Moni-Miss Athens distaff Foolish Moni in 1:57.2 for her third win, but her first in the U.S. Jessica Fallon trains the winner for owners Tim Klemencic and Blake MacIntosh. This training-owning team also clicked with the Father Patrick-Gin And Lindy filly Lindys Irishcream, who was the fastest Stallion Series winner in 1:57 under the guidance of Simon Allard, giving her Stallion Series wins in her last two trips behind the gate.

Father Patrick completed a siring double with Jameson N Lime (dam On The Rocks), who now has six wins in her brief career (two in the Stallion Series) after a 1:57.2 win for owners Virginia and Kathy Schoeffel, Big L Stable, and Mary Owlett, trainer Steve Schoeffel and driver Brady Brown. Brown also had a Stallion Series double, and his other win came with the leading prelim point-winner Fortune Forecast, the Fordham Road – Fast Reaction filly who took a new mark of 1:57.4 for trainer Rick Beinhauer, also co-owner with Regina Beinhauer.

Today’s results, from the final PASS and Stallion Series prelims of the year, assure that no one from any of the eight divisions will have a chance to “sweep” their respective competitions. Philly will have four of those Sires Stakes Championships for two-year-olds, plus whatever consolation races that fill, next Sunday, Sept. 4 during a card offering over $1 million in purses.