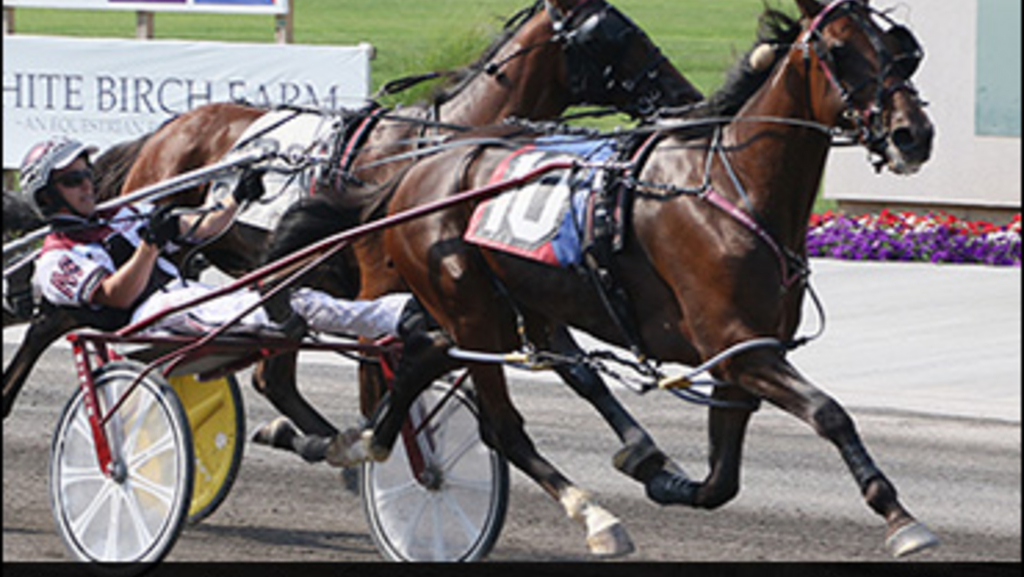 Solar Sister ($9.50) stole the show in the final 150 yards of Sunday (August 28) afternoon's stakes-laden card at Tioga Downs, dueling down prohibitive favourite Lady Shadow for a 1:49.4 triumph in the $200,000 Artiscape distaff pace.

Favourites were upended in the Empire Breeders Classics as well, as No Clouds Bluechip ($7.00) and Fresh Cut ($36.00) both took top honours in their respective events for New York-sired three-year-old pacers. On the undercard, trainer/driver Åke Svanstedt swept a trio of W. N. Reynolds Memorial events for two-year-old trotters.

Tasked with a second-row start in a field of 10, Solar Sister sat just of a contested pace in the initial stages of the Artiscape, working into fifth early as Lady Shadow (Yannick Gingras) pushed clear of Table Talk (Andy Miller) after a :26.2 first quarter. On approach to the clubhouse turn, Doug McNair angled Solar Sister first-over, only offering mild progress into a :54 half-mile. The four-year-old Mach Three mare did her best work up the far side, working to within a length of Lady Shadow through a :27.2 third quarter and subsequently dueling with the 1-1/8-mile world record holder. The two drew off from a fading Table Talk, and Solar Sister dueled to the fore in mid-stretch. Solar Sister's 1:49.4 mile time gives her a share of the track record for four-year-old pacing mares that was established by Anndrovette five years ago.

Lady Shadow would have to settle for runner-up honors as the 2-5 favourite, while Devil Child (David Miller) sustained a massive three-wide bid off the far turn to capture third.

Favourites were upended in both Empire Breeders Classic events as well, with No Clouds Bluechip and Fresh Cut both prevailing off cozy stalking trips.

In the $239,225 Filly Classic, Brett Miller pushed No Clouds Bluechip into play with just over a quarter-mile to go, overtaking a fading Angels Rockn Pink (Mark MacDonald) before engaging Wishy Washy Girl (Jim Morrill Jr.) on approach to the far turn. The Roll With Joe filly edged clear authoritatively, sprinting off by four and three-quarter lengths en route to a 1:50.1 triumph as the second favourite. Wine Snob (John Campbell) posted belated uncovered gains to take second at 59-1, while even-money favourite Penpal (Pat Lachance) could only overcome stale early cover enough to save third down the grandstand side.

The development of the $240,475 Classic for colts and geldings came as no surprise, but the outcome stunned. Marcus Miller pushed forward early with Fresh Cut and ultimately established a cozy pocket trip with a circuit to go after yielding to 1-4 favourite American Passport (Scott Zeron) at the winning post. While the shape of the race held true to expected form, Fresh Cut's strong turn of foot from the pocket in the final eighth of a mile proved plenty to reel in American Passport and also stave off a late bid from 41-1 runner-up Stolen Glimpse (Yannick Gingras) for a 1:51.1 victory. American Passport ultimately faded to third after he was gathered in.

Already renowned for his mastery in the kingdom of trotting, Svanstedt revealed why that contention possesses such veracity as he conditioned and steered New Jersey Viking (Muscle Hill-Hall Of Wishes), Ice Attraction (Muscle Hill-The Ice Queen) and Evelyn (Muscle Hill-Viva Las Lindy) to victory in their respective splits. While both New Jersey Viking ($2.90) and Ice Attraction’s journeys ($3.10) to the wire in their contests, which are relegated solely to two-year-old colts and fillies, were quite straightforward, Evelyn’s ($5.20) provided a much more extensive amount of drama.

Commencing his mile from post position eight, New Jersey Viking went right to the fore and was never threatened as he cruised around the Nichols oval. Owned by Knuttson Trotting and Little E LLC, the colt collected his second career triumph from five trips to the post. Two of his previous engagements were fourth-place finishes in the Peter Haughton Memorial and New Jersey Sire Stakes final.

New Jersey Viking tripped the timer in 1:55.1, which was a new lifetime mark, and increased his bankroll to more than $69,268.

While not quite as dominant as her male counterpart, Ice Attraction demonstrated why she merits respect. The public’s selection was content to sit in the pocket while Overdraft Volo (Andy Miller) cut the mile, until Svanstedt pulled his charge on the far turn. There was never a doubt who would be appearing in the winner’s enclosure as the filly always had her rival measured.

Owned by her trainer, Douglas Sipple, Mal and Janet Burroughs and Little E LLC, Ice Attraction strode across the finish line in 1:56, a new lifetime best, and scored her second career win to improve her resume to 6-2-1-1. Her earnings now stand at $35,300.

Although Evelyn’s trip around the track was not without its impediments, the filly persevered after being shuffled back to fourth from second. Once pulled three-wide at the three-quarter pole, Evelyn passed her dueling colleagues Southwind Avanti (Marcus Johansson) and Treviso (Charlie Norris) to break her maiden in her sixth attempt.

The filly, owned by Svanstedt, Little E LLC, Borge Nasstrom and JT45, equalled the track standard for her age, sex and gait with a final clocking of 1:55.2. Her record now stands at 6-1-1-1 and she has earned $47,310. Despite not winning prior to today, Evelyn had displayed talent with a sixth in the James Doherty Memorial and a second in the New Jersey Sire Stakes final.

(with files from Tioga)