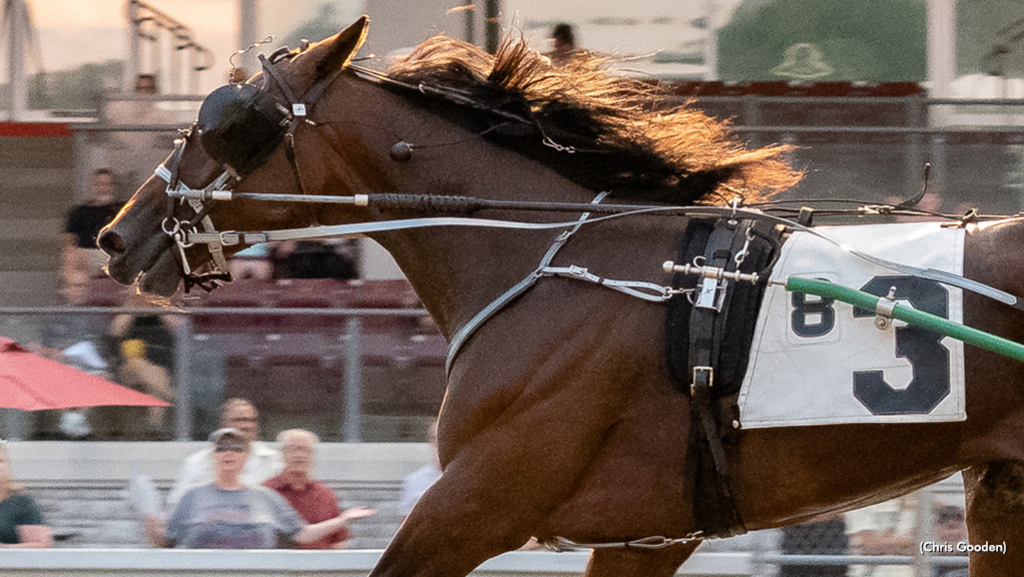 A four-race maiden entering the race, Designer Drink shot through the "Lightning Lane" to spring a 10-1 upset in Friday’s (Aug. 26) $151,230 Pennsylvania Sires Stake (PASS) at Hollywood Casino at The Meadows. Once In A Lifetime captured the other division in the event for two-year-old trotting colts and geldings, known as the Florida Pro, giving Tim Tetrick a PASS sweep.

While Carter Michael Deo and Lukes Bar dueled for the lead down the backside, Designer Drink patiently waited at the cones. When he found clearance inside, the Bar Hopping-Designable gelding blew past Carter Michael Deo, defeating him by 1-1/4 lengths. Father Stosh rallied for show.

“He had a whole lot of bad luck, and I told Timmy, if you just give him a shot, he can go with those colts,” said Symon Spicer, who trains Designer Drink for Keystone Stable. “He’s been getting run into, getting run over, but I had all the faith in the world in him.”

Once In A Lifetime earned his second straight PASS win by getting away fourth, moving with cover down the backside and brushing through the lane to win in 1:55.4, matching his career best. Spitfire Oversees finished second, beaten 1-1/4 lengths, with Southwind Distilld third.

“I never pulled his plugs last week and didn’t pull them again today,” Tetrick said. “That’s a sharp little horse, and he likes his work. He’s pretty solid. You don’t have to hold your breath too much when you drive him.”

Tetrick and Spicer also teamed to score with Drake Hanover, who collected a maiden-breaking victory in 1:56.3. Tetrick had been racing the youngster fairly conservatively, but circumstances forced him to move at the three-eighths.

“They jammed up so fast I was about to run over the guy in front of me,” Tetrick said. “So I was out. I did what I had to do. But we’ve been teaching him to finish. He’s learning how to race.”

The son of Andover Hall-Dancing For Money was up to the challenge, downing Biscoe Hanover by 1-1/2 lengths, with long shot Latavius third. William Masterson, Keystone Stable and Ross Spicer campaign Drake Hanover.

The other stallion series splits went to Open Bar and Spicy Hops — the latter at 51-1.

Parked for more than half the race, Floyd “Roper” Rhodes and Forever Jesse persevered and drew off to a surprisingly easy victory in Friday’s $10,000 leg of the Great Lakes Amateur Driving Association (GLADA) Trot.

Rhodes and Forever Jesse have drawn post six or deeper for six start starts, resulting in some brutal overland journeys for the six-year-old Jailhouse Jesse-Chillinghim gelding. Rhodes blames the driver, at least in part, for that.

“He can get in a hole when a professional drives him,” he said. “When an amateur drives him, I look and I think, ‘I’m not sure that’s enough room. Maybe I should just stay out there.’ I don’t know who’s more tired — him or me.”

On Friday, Rhodes finally cleared Leslie “Pay the Rent” Zendt behind Classicality before the three-quarters and drew off to defeat Scott “Scooter” Betts and Lifeintheslammer by 4-1/4 lengths in 1:55.3. Stephen “You’re Never Too” Oldford with Sumbodygetdisfool and Tom “Mayhem” Svrcek driving Worthy Of Honor rounded the ticket.

Rhodes also trains and owns Forever Jesse, who lifted his career bankroll to $145,281.