Legendary Toronto Blue Jays right fielder Jesse Barfield recently helped whip a crowd at the Rogers Centre into a frenzy when he appeared at a pre-game ceremony along with George Bell and Lloyd Moseby. On Sunday, August 23, the man with a ‘cannon’ for a right arm appeared at an Ontario racetrack.

The live harness season at Clinton Raceway is winding down, with only two weeks of live race cards remaining. The track’s Sunday program was all about the kids, both on, and off track. Kids enjoyed rides and fun in the park and the chance to drive a racehorse between the races with the ‘Wanna Drive’ team.

All fans were treated to free photos and autographs with Barfield, who had been scheduled to appear at the track in July, but had to rebook for the Sunday card due to a previous scheduling conflict.

Barfield even joined in a race presentation for Race 7 winner E L Spartacus.

The card was marred by an accident in Race 6, which was declared a ‘no contest.’ Kid Galahad N (driven by Lorne House) and Good Friday Heidi (Ricky Forgie) both fell to the track.

Good Friday Heidi suffered a catastrophic injury in the accident and passed away on the racetrack.

House provided an update on his status, which can be read in the comments at the bottom of this story. 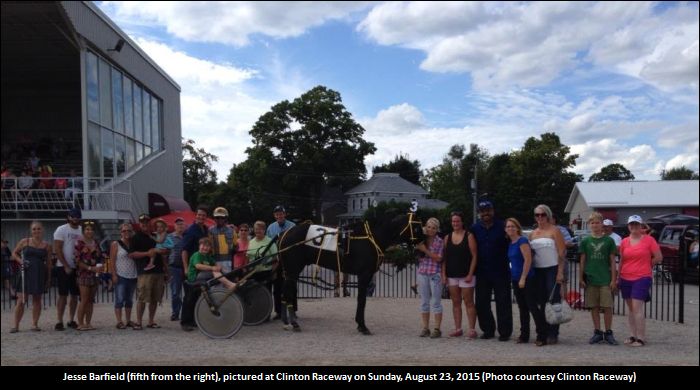 What a nice, quick and

What a nice, quick and compassionate gesture by horseman, Lorne House, coming right on here to wish his sincerest condolences in regards to the Thompson family losing Good Friday Heidi. Glad to hear that both drivers escaped serious injury and that Kid Galahad N also escaped with minor injuries. Again I applaud Lorne House doing this as it shows there is compassion and caring people in the industry when I have been told time and time again it is pretty much cut throat. Like Mr. House said RIP Heidi and I also hand out my condolences to the Thompson family. I love watching the sport of harness racing and anytime we lose a person in it or a horse in it well it is a sad day.

KID GALAHAD N escaped with minor injuries but unfortunately GOOD FRIDAY HEIDI suffered fatal injuries.. I can't speak for Rick Forgie but he seemed ok and drove the rest of the card. I also luckily escaped with minor bumps and bruises.. My sincerest condolences go out to the Thompsons. RIP Heidi.