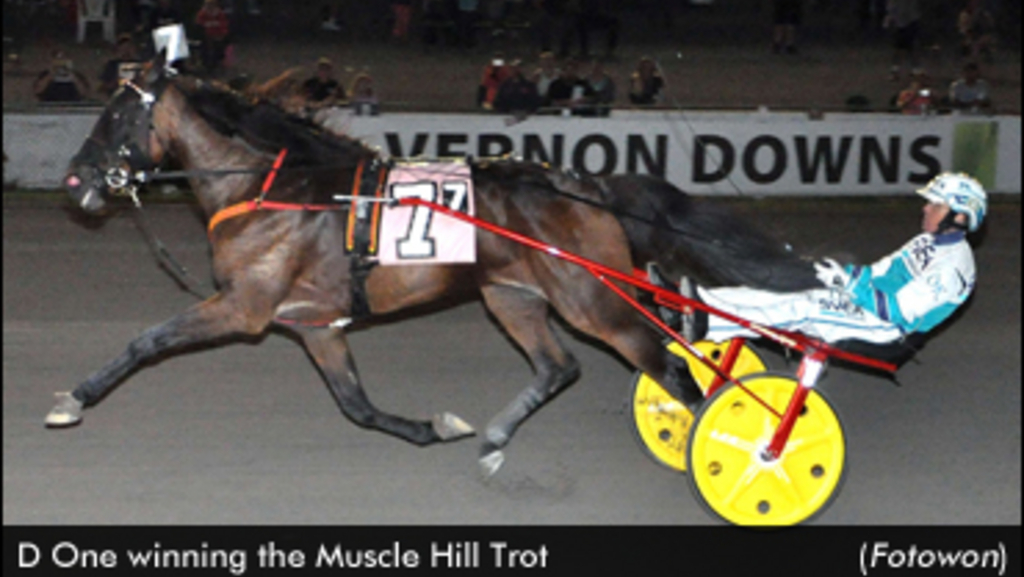 Finding a seam off the far turn, D One ($5.90) stormed home to collar 3-5 favourite Bee A Magician in the $177,000 Muscle Hill distaff trot during Friday's stakes card at Vernon Downs.

The five-year-old daughter of a pair of 1:50.1 trotters, Donato Hanover and Giant Diablo, floated into a close stalking spot, just off pacesetters Bee A Magician (Brian Sears) and Shake It Cerry (Jimmy Takter) through initial fractions of :26.3 and :56.3. As Handover Belle (Matt Kakaley) began the outer flow just one spot farther back, Örjan Kihlström elected to save ground with D One, locked in through the far turn but able to wedge off the pegs as Handover Belle faded off the corner. After Bee A Magician accelerated to a clearer lead through three-quarters in 1:25, D One found ample room to commence her rally. She made up four and a half lengths and put another length on Bee A Magician in the end, capping her 1:52.2 triumph with a blistering :26.3 closing sectional. Allie Labrook (Andy Miller) stayed on for third after tracking closely throughout.

D One is now two-for-two in North America having defeated Bee A Magician previously in the Fresh Yankee on Hambletonian Day.

Roger Walmann, who trains D One for Stall Kenny 23 of Sweden, said he is proud of his mare and she will attempt to beat her mother's world record at The Red Mile.

After working clear of her entrymate through a pressured early pace and subsequently yielding to the pocket, Venus Delight ($5.70, part of entry) made the most of her pocket trip, sprinting clear in mid-stretch and holding off a late threat from Radar Contact for a 1:49.4 track record equalling triumph in the $194,000 Artiscape distaff pace.

Jason Bartlett sent the five-year-old daughter of Bettors Delight to the front, sprinting clear of entrymate Anndrovette (Tim Tetrick), Table Talk (Andy Miller), and Skippin By (Jim Morrill Jr.) through a :26 initial quarter. Just upon making the lead, Venus Delight yielded to Anndrovette, and the triple millionaire led the charge through a :54.3 half before Skippin By nudged her along through a 1:22.3 three-quarter sectional. Boxed through the far turn, Venus Delight found clearance at the pegs, driven to the lead at the eighth pole. Meanwhile, the third-over Radar Contact (Scott Zeron) swung four-wide through the stretch, closing stoutly but ultimately missing by a length. Anndrovette held third, while Precocious Beauty (Brian Sears) stayed on for fourth from her second-over trip.

"She's young, she's coming and she's been really good all year for us," said Bartlett. "She goes with them every week and she's just been unlucky lately. Tonight she had some luck."

While Obrigado ($11.40) had his hooves full in the final three-eighths of the $200,000 Crawford Farms open trot, he succeeded in holding Lindys Tru Grit at bay for a 1:52 score at the Miracle Mile.

Obrigado used nearly the entire first turn to clear the lead, pushing past Meladys Monet (Jason Bartlett) well after a :27.1 initial quarter. The five-year-old Boy Band gelding managed to catch a breather on the backstretch--but not only by way of a :29 second sectional. First-over challenger and 8-5 favourite Flanagan Memory (Brian Sears) broke stride just upon commencing his bid, changing the complexion of the race entirely. Still, Obrigado faced pressure on the far turn, as Lindys Tru Grit (Andy Miller) took up the chase in the final three-eighths. The pair would duel off the far turn, and despite being headed off the corner, Obrigado fought back gamely to reclaim command in the final sixteenth. The Paul Kelley trainee prevailed by a scant neck over the game Lindys Tru Grit, while Meladys Monet hooked three-wide in the final 70 yards to finish a hard closing third.

(With files from Vernon Downs)