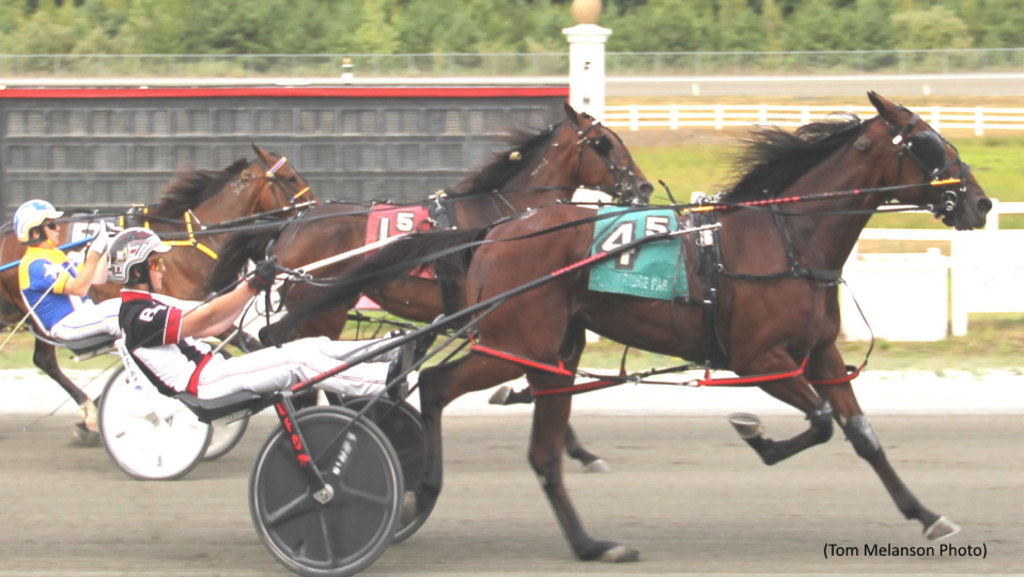 The Plainridge Park track record of 1:50.2 for a four-year-old pacing mare was just set one week ago by Pure Cotton in the track's top female class. This week, Classicist shipped in from Oak Grove in Kentucky and tied that new mark after making a strong stretch to victory in the $20,000 Fillies and Mares Open on Tuesday afternoon.

Brett Beckwith got away third with Classicist as Powered By Mach (Jay Randall) led the girls through fractions of :26.1 and :55. Heading up the backside the field split into two rows with Westbeach (Bruce Ranger) moving first-over on the rim and Classicist following right on her back.

Passing the three-quarters the field was tightly bunched and everyone had a shot. Powered By Mach was still strong and Westbeach was still the main threat. However Beckwith tipped Classicist three deep as they rounded into the stretch and under a determined steer, ran down Powered By Mach in the lane to win by one-half length in 1:50.2.

Besides tying the track standard, the time was also a new lifetime mark for the winner.

Her third win of 2022 year pushed Classicist ($5.40) to $104,000 in earnings this year for her owner David Kryway. Tahnee Camilleri was the winning trainer.

In the $15,000 Fillies and Mares Open II, Adashious Hanover (Luke Hanners) grabbed the lead at the quarter and never looked back. After backing the half off to :56.3, Adashious started to accelerate up the backstretch, ripped off a :28.1 panel and stride out to a two length advantage. From there she continued to extend her lead, was wrapped up by Hanners at the top of the stretch and won handily by 2-3/4 lengths in 1:52.1.

Adashious ($7.60) now has five wins and $80,110 in the bank and her career year continues for owners Marc Reynolds and Rick Cortese. Jimmy Nickerson is the winning trainer.

Massachusetts-bred pacer Treacherous Tom (Captaintreacherous-Kate Is Well Said) remains undefeated in 2022 after winning his fifth consecutive start at Plainridge Park in a $12,500 condition race. As one of two winning drives for Bruce Ranger, Treacherous Tom ($3.00) went gate to wire in 1:53.3 for owners Tom and Scott Dillon. Joe Nelson trains the win machine.

Treacherous Tom will be competing in the rich Massachusetts Sire Stakes that start at on September 25.

Live racing resumes at on Thursday afternoon (Aug.18) at 4 p.m.