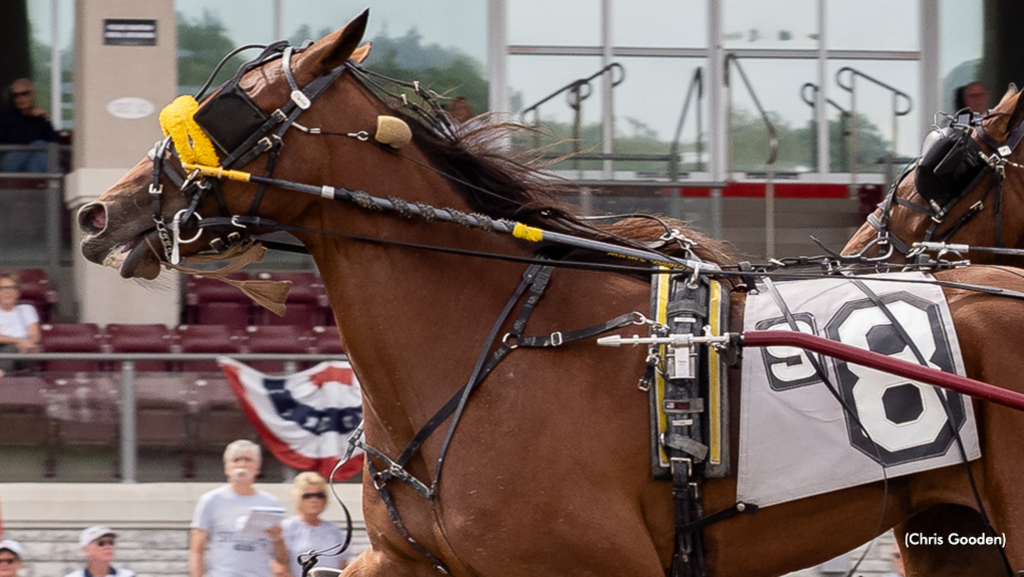 Dismissed at 12-1, Hello Yes Hi used the "Lightning Lane" to outkick the 4-5 favourite, previously undefeated My Little Captain, and spring the upset in Saturday's (Aug. 13) $162,556 Pennsylvania Sires Stakes (PASS) at Hollywood Casino at The Meadows. Proud Mary captured the other division in the event, known as the Meadow Cheer, for freshmen pacing fillies.

Hello Yes Hi battled four wide for the early lead before yielding to the pocket when My Little Captain quarter-poled to the point. In the stretch, however, Hello Yes Hi was the fresher filly, knifing inside for Ronnie Wrenn Jr. and downing the favorite by three-quarter lengths in a career-best 1:52.4. Square Deal finished third.

It appeared that Proud Mary would have her work cut out for her when Hallelujah Hanover got the front half in a leisurely :58. But winning driver Dave Palone, heeding the words of trainer Chris Ryder, said he was more worried about Proud Mary’s demeanor than the pedestrian fractions.

“I was concerned about getting her to relax,” Palone said. “Chris said she got a little anxious the last couple, so I wanted to keep her a little quieter. She sat in there perfectly, and when the plugs came out, she ran down a good filly.”

Proud Mary was both mannerly and swift, shooting the Lightning Lane to defeat Hallelujah Hanover by a length in 1:52.4, fastest mile of her career. My Hungry Girl completed the ticket.

Butterfingers may have been surprised when she looked to her right and saw that her first-over challenger was none other than her stablemate, Duchess Hill. But the daughter of Sweet Lou-Drop The Ball was up to the task, beating Duchess Hill by 1-1/4 lengths in 1:53.3 for her second stallion series victory. Little Lady J earned show.

“She kind of let go of me going into the last turn,” said winning driver Palone. “I welcomed the competition. When her stablemate got to me, she picked me back up like she was supposed to. She’s really a nice filly, but she was a little bit lost on the lead.”

Nevertellmetheodds and Hungry For Kisses took the other splits.

Palone’s torrid streak continued; his three wins on the 12-race card lifted his total to 25 over the past six programs. Wrenn and Burke teamed for three victories while Hunter Myers and trainer Paul Corey also enjoyed triples.