'Dude' Is The Man In The Adios 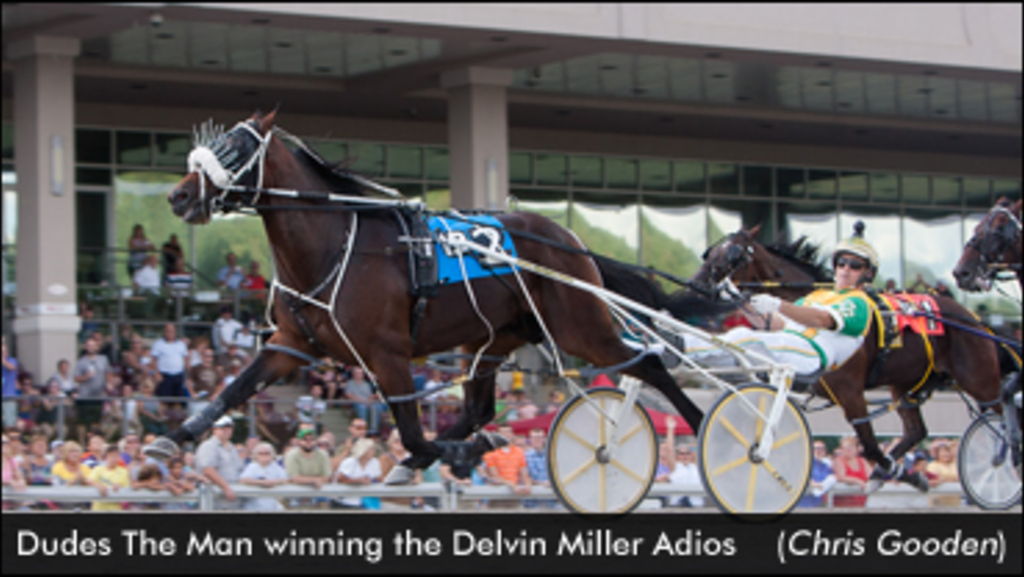 Dudes The Man turned in a career-best 1:48.4 performance to win the $400,000 Delvin Miller Adios Pace for the Orchids presented by Coors Light on Saturday afternoon at The Meadows Racetrack and Casino.

Corey Callahan drove the three-year-old son of American Ideal to his biggest stakes win for trainer Jessica Okusko and owners M And L Of Delaware LLC and Victoria Dickinson.

"I am still speechless," said an emotional Okusko after competing for the first time in the Adios. "I want to thank Corey and M And L, the owners, Larry Rathbone and everybody. It was an awesome race and 'Dude' got the job done!"

Leaving from the outside post nine after Angelo J Fra (Tony Hall) broke stride behind in the gate, National Seelster (Tim Tetrick) took the lead early on and then fellow elimination winner My Hero Ron (Yannick Gingras) swept around him as they passed the first quarter in :26.3. Meanwhile, Callahan got away fourth with Dudes The Man and made his move with the 3-2 favourite during the second panel.

As My Hero Ron led the field to the half in :54.2, Dudes The Man advanced first over with Lost For Words (David Miller) following his cover and Yankee Bounty (Brett Miller) also moving into the outer flow.

Despite jumping shadows on the backside, Dudes The Man took over the lead from My Hero Ron with ease by the 1:21.2 three-quarters and was strong through the stretch to win in 1:48.4 by two lengths over the fast-closing Yankee Bounty and Lost For Words.

"I didn't want to get away any worse than fifth. That way I could be either first or second over," said Callahan of his racing strategy. "It worked out perfect today. My Hero Ron didn't really have it and I was able to clear pretty easy and he held really game to the wire.

"They did some work with his bridle, but he was still jumping shadows really bad," noted Callahan. "Up the backside, if you watch the replay, you'll see his head drop a couple times. But coming off the last turn, somebody from above was helping me out. The sun went behind the clouds and we had some shadows and that got me right where I needed to go.

"The horse overcame it and we got it done. Props off to 'Dudes' and Jessica and [her husband] Howard for getting him rigged up to get around there. That was an exceptional mile."

Dudes The Man was a quick-closing third in his elimination, missing by just a neck behind Lost For Words and winner Cooperstown. Prior to the Adios, he finished second in the Meadowlands Pace to Wiggle It Jiggleit. Dudes The Man now sports a sophomore record reading 3-2-4 in 10 starts and the lion's share of the Adios purse nearly doubled his seasonal earnings to $428,984.

"He seems to be peaking at the right time," said Okusko. "As long as we keep him healthy and sound and don't screw him up, we should have a good year."

Last Saturday, the Ron Burke stable set a personal record with 24 horses entered (22 actually raced), most ever for a single program at a single track. The stable shattered that mark Saturday when they raced 29. Although Burke had to settle for second (Yankee Bounty) and fourth (Cooperstown) in the Adios, he notched seven wins on the 17-race stakes program. His highlights included a sweep of the $62,500 Quinton Patterson Adioo Volo divisions with three-year-old pacing fillies Storm Point and Sassa Hanover.

Black Horse Racing’s Storm Point launched a relentless first-over move from fourth for Dave Palone. The daughter of Somebeachsomewhere-Limestone Cowgirl wore down the leader, Bettor Be Steppin, and defeated her by half a length in a career-best 1:50.2, a national season’s mark. Bedroomconfessions rallied for show.

Sassa Hanover made the lead with a quarter-pole move and held off Better Said, downing her by a length in 1:50.4. Southwind Roulette, also from the Burke stable, earned show.

“When she’s good, she’s good from anywhere,” said winning driver Yannick Gingras. “She hasn’t been on her game for a little while. Her blood wasn’t right — everything was messed up. But it seemed like she was back today. She can race any which way when she’s good.”

Jacksons Minion, a Hambletonian eligible, made it three straight wins in grand style, rolling to a front-end win in 1:53.1. That knocked a tick from Ladys Dude’s track record for sophomore geldings and erased the stake mark of 1:54.1 jointly held by SJs Caviar and Wheelsandthelegman. Chef Lee was second, one and a quarter lengths back, with Shoot The Thrill third.

“I didn’t know he’d go in 1:53, but I thought he could go 1:54 plus anyway,” said trainer/driver Tom Jackson, who owns the son of explosive Matter-Armbro Espionage with Howard Taylor and Judith Taylor. “That’s about all he had at the wire, but I didn’t give him his head until halfway through the last turn.”

In the other Manderino split, Suit And Tie looked much the best on paper — he was hammered down to 1-9 — and he looked just as sharp on the track, notching a front-end victory in 1:56. Only The Brave closed well for second, a length in arrears, while the pocket-sitting Simeon earned show. Corey Callahan piloted the son of Andover Hall-Warrawee Krisp — a Hambletonian eligible — for owners William Wiswell and M&L of Delaware.

“He wasn’t quite himself when he raced here last week,” said Tyler Butenschoen, assistant to winning trainer John Butenschoen. “He had a good week training, and he raced like he was supposed to. We added some cups, and we went to aluminum shoes up front. He’s eligible to the Townsend Ackerman as well as the Hambletonian, so it’s the owners’ call.”

Sky Hanover meandered to the front from the gate, but she was strong enough on the lead to hold off Meadowbanch Wendy by a nose in 1:56.2. Pad Princess completed the ticket.

“I took my time getting there, made sure she behaved herself,” said winning driver Andy Miller. “After that, it was a matter of keeping her attention. She’s made breaks off and on, but she’s been pretty honest lately.”

Ideal Jimmy, bet down to 3-5 despite making breaks in his previous two starts, stormed home in :54.3 from second over to catch Big Top Hanover and Whata Twist in 1:53.2 in the first division. The altered son of Western Ideal–Armbro Nectarine, who had recovered with sub-:28 quarters after his recent pair of errors, continued that streak of late speed with a :27.4 kicker in winning for driver Marcus Miller, trainer Robin Cruise, and owner D. R. Van Witzenberger.

“They’ve been working hard on him — I think he had a little soundness thing,” Miller said. “It got in his head, where he would look for a way out. He still threw in a couple steps, but he worked through it. I was happy to make it through the first turn.”

1:53.3 may be only an “average” time for these baby colts, but 1:24/:55.4/:27.4 back numbers are impressive, and that’s what the quarter-moving Check Six stormed home in to take his third win in five starts. Another Somebeachsomewhere out of the mare Southwind Vanna, Check Six followed up two straight sire stakes wins with this Grand Circuit triumph for driver Yannick Gingras, trainer Ron Burke yet again, and Burke Racing, Weaver Bruscemi, William Switala and James Martin.

Yankee Moonshine inherited the lead when early leader Graceful Vision made a miscue, then threw back fractions of :55 – :27.2 in defeating Corona Again to take the first division in 1:53.4, a personal best. The daughter of Yankee Cruiser–Bootleg Yankee, bred by Hall of Fame nominee Charles Keller III, broke her maiden in style for Gingras, Burke and owners Burke Racing, JT45, Weaver Bruscemi and Lawrence Karr.

Another getting her first victory was the McArdle-Smokin Pistol filly Shesasmokinlady, who set the pace, then withstood a stern Lightning Lane challenge by Hug A Dragoness to earn a 1:53 triumph by a head. Tony Hall kept the baby game nearing the wire to bring success to trainer Kelly Paver and owner Iris Horowitz.

And as if Ron Burke weren’t winning enough races, he almost found a way to get two wins in one race; his fillies Danika P and Eloquent Grace were separated by inches at the end of another division, with the Yankee Cruiser–Danika Hanover miss Danika P getting the nod in 1:56.1. The winner stepped home in :27.2 for driver Matt Kakaley and the Burke Racing/Weaver Bruscemi/M1 Stables combine.

Blue Moon Stride was in full stride during :55.3 – :27.2 back fractions in catching Lyons River Pride to capture the final Mary Lib division while taking a mark of 1:53. The daughter of Rocknroll Hanover–Classic Star showed an impressive turn of late foot in running her record to three-for-four for driver Andy McCarthy, trainer Mark Harder and owners Emilio and Maria Rosati.