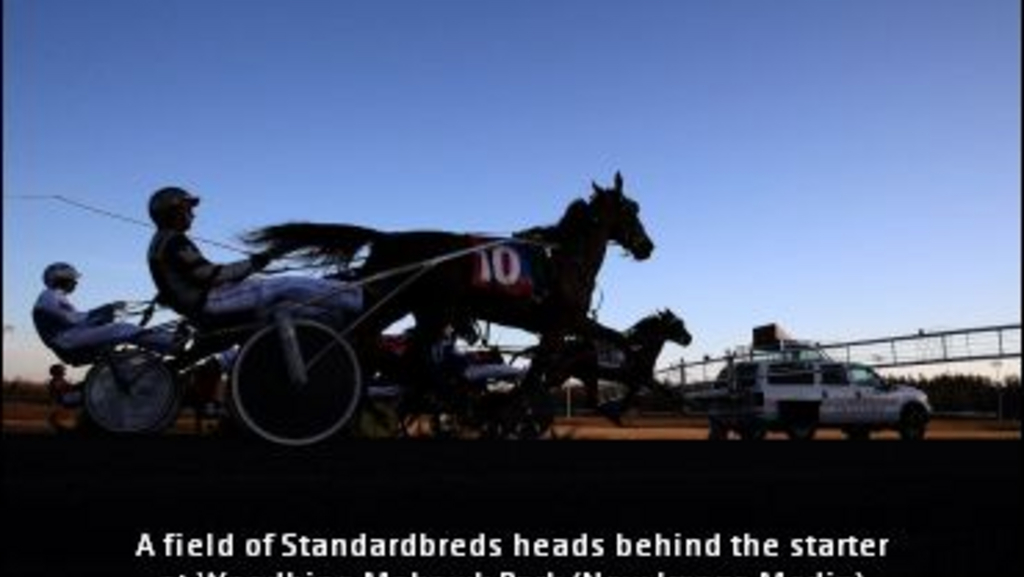 Woodbine Mohawk Park hosted a 13-race qualifying session on Tuesday (July 9), and the docket featured no less than eight races for two-year-olds. One of the winners was definitely of the high-priced variety, as a $300,000 yearling purchase was able to nail the wire first in her respective tilt.

It was all Whose Blues, the aforementioned $300,000 yearling, in Race 4. The bay daughter of Cantab Hall lined up in Post 2 and was in rein to Bob McClure for trainer Luc Blais.

McClure was in no rush early in the contest, as he settled into the two-hole early and allowed BR Serena Slam to knock out the fractions in :29.4, 1:01.1 and 1:31.2. McClure called on Whose Blues off the turn, and the duo had gained control of the lead by the time they hit the head of the lane. Whose Blues started to tack on lengths at that point. She had been leading by two and three-quarter lengths at the head of the lane, but went on to win by nine lengths in 2:00 (off a :28.1 final quarter) when all was said and done.

The Determination Stable of Montreal, Que. plucked Whose Blues (Cantab Hall – Bright Baby Blues – Andover Hall) out of the 2018 Lexington Selected sale for $300,000. The winning bid was tied for the third highest price of the Tuesday session. Whose Blues is the first foal out of the stakes-winning Bright Baby Blue, whose second dam was a Dan Patch Award winner.

The first of the baby races took to the track for Race 2, and a pair of fillies were right there at the wire when all was said and done. The Randy Waples-driven and Tony Alagna-trained Libspeak had cut the mile from Post 3 and was looking to go all the way. The two-hole occupant – the Susie Kerwood-trained and Mike Saftic-driven Betalady came calling late in the stretch. When the dust settled, it was Betalady who got up by a nose and nailed the wire first in 1:57.4. Betalady is owned by M And L Of Delaware LLC (of Wilmington, DE).

Two-year-old Royalty For Life gelding HP Royal Theo was tops in Race 3, as the Jean Tourigny-trained and Louis-Philippe Roy-driven bay left from Post 5 and trotted to a gate-to-wire win in 1:59.3 for owners Claude Hamel (Ayer's Cliff, Que.) and Michel Damphousse (Louiseville, Que.). The morning mile was the first charted performance of the homebred’s career.

Race 5 saw the Scott McNiven-trained and Jody Jamieson-driven Mr Cheeseman find racing room in deep stretch, as the Betterthancheddar colt skimmed the pylons late from the two-hole and just got up in time to nail the wire in 2:00.4. Donald Douglas (Ingersoll, Ont.) owns the $25,000 London Selected sale purchase, who is out of the Western Hanover mare Bandolera Hanover. The morning mile was the second qualifying effort and first win of his career.

The Herb Holland-trained and Louis-Philippe Roy-driven Solid was just that in Race 6, as the two-year-old Kadabra-Smexi colt went gate-to-wire from Post 6 and stopped the clock in 2:03.2. The performance was the first qualifying win for Solid, a $40,000 Lexington Selected yearling purchase that is owned by R A W Equine Inc. (Burlington, Ont.), Ross Warriner (Burlington, Ont.), Donald Whalen (Markham, Ont.) and Carolyn MacIsaac (Milton, Ont.).

In Race 8, the John Bax-trained and Matt Bax-driven Need An Alibi (E L Titan—Lady Talbot) kept close tabs on the leader from second before pouncing in the lane and tallying a 2:01.3 win for the Bax Stable (Campbellville, Ont.), Dave Hudson (Dallas, TX) and Brilo Farms (Sharon, Ont.). Need An Alibi was a $52,000 yearling purchase at the Harrisburg sale. She took her qualifying mark in the morning mile after having made breaks in her previous three assignments.

The last of the morning’s baby races took to the track for Race 9, and the contest produced the fastest two-year-old win time of the session. Driver Jody Jamieson teamed up with the Nicky Comegna-trained Twin B Watch Me and the duo was dynamite from Post 3. Jameson and the son of Sportswriter-Burnett Blue Chip sliced the fractions in :29.4, :59 and 1:27.2 before firing home in :27.3 for the 1:55 win. The margin of victory was five and three-quarter lengths for Comegna, who owns the brown gelding.