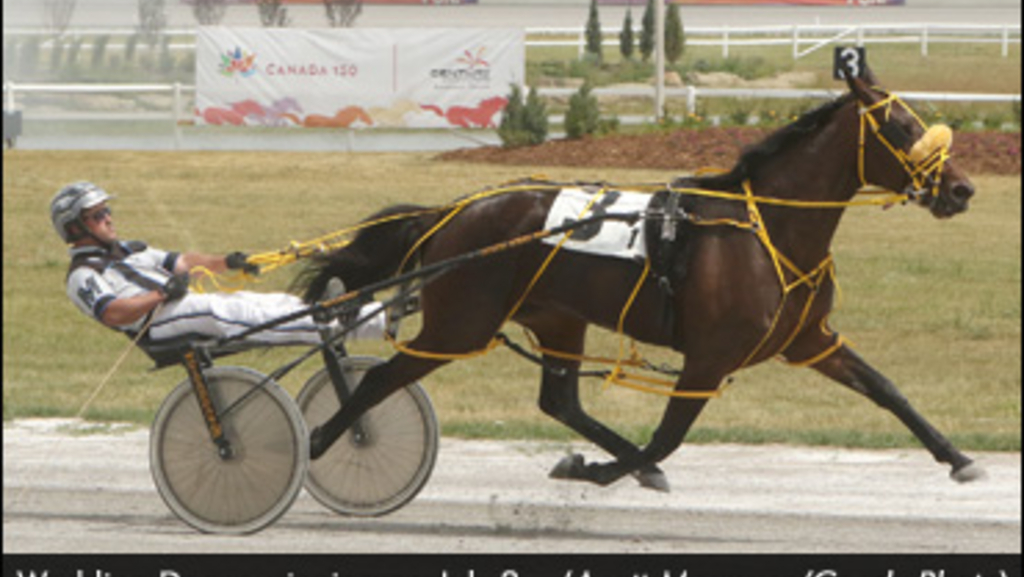 Driven by Jim Marino, Wedding Dance led from start to finish in 1:54.3, lowering the divisional track record by one-fifth of a second that was held by Blue Star Texas. Harold Haining trains the talented Mystery Chase-Westart Love filly for owner Donald Richardson of Cochrane, Alta.

Wedding Dance took command from post three and clocked fractions of :28.2, :57.1 and 1:26.2 before drawing off from the rest of the field by six and a half lengths with a :28.1 final frame. Outlaw Fireball, the Alberta Princess and Meridian Breeders Stakes champ, closed from the three-hole to finish second for J.F. Gagne, with Sideline Secrets (Rene Goulet) well back in third.

Wedding Dance earned her fourth win of the season from nine starts and pushed her annual income to $42,560. She was a winner in the Moores Mile earlier this year, with subsequent elim victories in the Princess and Meridian Breeders before finishing second by a neck to Outlaw Fireball in the that final last weekend. Sent postward as the even-money second choice to 'Fireball' today, she paid $4 to win.

Stylomilohos emerged from the pocket approaching the third quarter mark to confront race leader Itchin To Cu (Kelly Hoerdt) and wore down that rival in the stretch for the career-best 1:56.4 victory by three-quarters of a length. Gord Abbott trains the Mystery Chase-Heart And Style filly for owner Ray Soh of Delta, B.C.

Moving into the outer flow from the backfield in the final elimination, 10-1 shot Cenalta Cougar ($22.70) then kicked off cover and stormed home a 1:56.3 winner for driver Rene Goulet, with Legs Like Tina (Phil Giesbrecht) coming on to finish second by a length. Goulet trains the Allamerican Merlin-Wolf Creek filly, who also took a new lifetime mark, for breeders Gordon and Helen Empey of Bowden, Alta., and co-owner Myrna Empey of Calgary, Alta.

The top finishers will return to contest the $65,000 (added) final of the Alberta Diamond next Saturday, July 15.