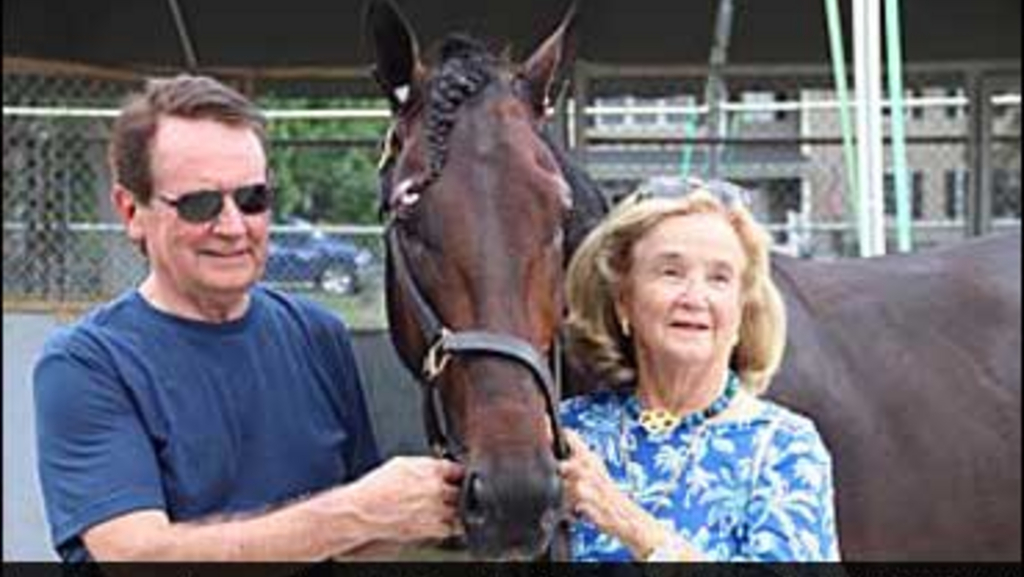 Captain Malicious and driver Mark MacDonald won the $15,700 Landmark Stakes for three-year-old male pacers by three-quarters of a length over Branquinho in 1:54.1 to eclipse the previous track standard of 1:54.3 for a three-year-old colt set by Soto in 2015. A son of Captaintreacherous-Silky, Captain Malicious has won two of 10 races this year and earned $32,360 for owners Schnittker, Dr. John Egloff, John Frisch, and Max Hempt.

“That horse has had no luck,” MacDonald said. “He paced (1):49.1 in his Hempt elimination and just missed making the final. In the (Hempt) consolation, I got stuck behind a bad one. He’s been good, he’s just not had a whole lot of racing luck. He’s a really nice horse. It’s early yet. He’s so handy, he’s so good gaited, I can’t see him not being a real player later in the year.”

MacDonald also found the winner’s circle with Schnittker-trained Rodeo Beach, who won the $9,500 Landmark for two-year-old female pacers by three-quarters of a length over Finally Free in 2:00.2. Rodeo Beach, who was fourth at the half, moved to the front on the final turn before losing the lead to Finally Free in the stretch. But the daughter of Somebeachsomewhere-Wild West Show, a full sister to Dan Patch Award winner Huntsville, battled back for the victory in her career debut.

“She was blowing right on by,” MacDonald said. “We train here, and I don’t know if she thought that was it (on the final turn) but she was calling it a day on me. Once I got around the turn, she took back off. She’s just green. But she’s a really nice filly.”

Schnittker’s remaining winner was Full Rights in the $14,800 Landmark for three-year-old male trotters. Full Rights, a son of RC Royalty-Cruella De Ville, won by one length over Jnr Express in 1:57.4 with Schnittker in the sulky. Full Rights has won two of nine races this year and earned $19,824. The gelding is owned by Runthetable Stables.

The 68-year-old Johnson was making his first driving start since October 2017 and won with Higher Call in the $13,550 Landmark for two-year-old male trotters. Higher Call, who was making his career debut, was first at every call on his way to a 19-1/2 length triumph over Superior Athlete in 2:03.1.

“It’s been a while,” Johnson said with a smile after picking up his first Grand Circuit victory since 2015. “(Higher Call) is getting better. He likes a small track. He’s a grinder. He doesn’t have that quick speed, he just keeps going. I had him in the winter in Florida. He’s been sound and he wants to do it. He’s a nice horse to be around.”

Higher Call, who is in the care of Johnson and trainer Marcus Melander, is owned by Caroline Gerry, who also bred the colt. He is a son of Explosive Matter-Bruschette. Gerry raced Bruschette, who was trained by Johnson, during her multiple-stakes-winning career.

“We didn’t know if he had it in him or not, but he’s growing,” Gerry said about Higher Call. “We’re just taking it easy with him, not pushing him. I love him. He’s got such a nice manner. He’s good looking. He’s got to grow into himself. He was big from the beginning. He’ll be good.”

Meadowbranch Vicki won by a neck over Taja Mahala in 2:00.3. Meadowbranch Vicki, a daughter of Wishing Stone-Wen-mars Memo, has won two of 10 races this year and earned $27,383 for owner Hans Enggren. The Jenny Melander-trained filly was driven by Jason Bartlett.

Hurrikane Lori Ann won by 1-1/4 lengths over Adorabella in 1:55.4 for driver Carl Garofalo and trainer John McDermott. The filly, a daughter of Lis Mara-Luxury Goods, has won two of six races this year and earned $28,501 for owners Jonathan Klee Racing, Kuhen Racing, and Pegasis Investment Group.

Friday’s Landmark Stakes are part of the annual Grand Circuit meet at Historic Track. The meet coincides with the sport’s Hall of Fame inductions, which will occur Sunday at the adjacent Harness Racing Museum and Hall of Fame.

Post time is 1 p.m. daily. Admission is free for children (12 and under); adults are $5 and includes a racing program. The stable area is open to visitors, to see the racehorses up close as they prepare for competition.

Following the race, the drivers will be available to meet fans and sign autographs at tables located adjacent to the grandstand.