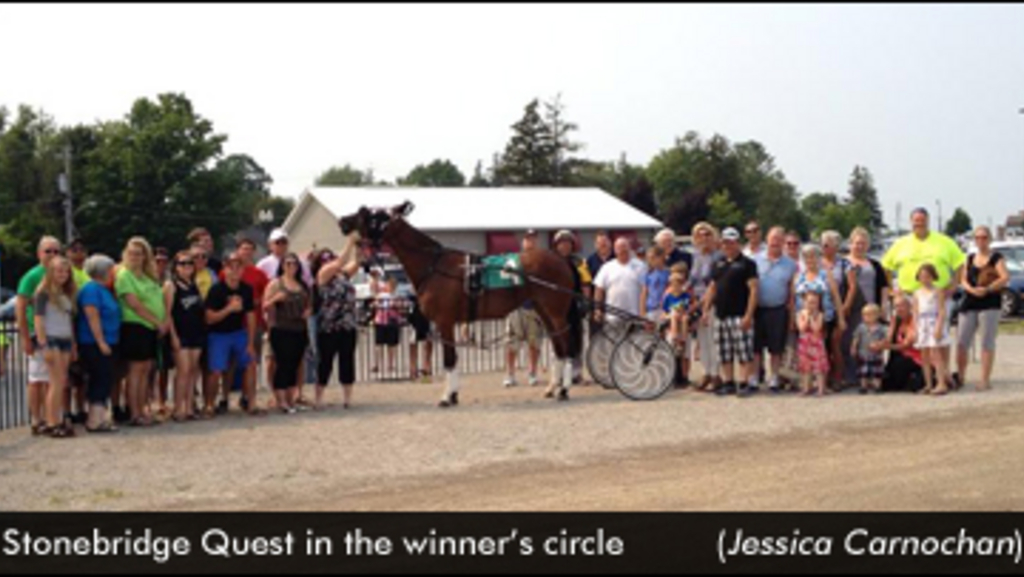 Three-year-old pacing filly Stonebridge Quest delivered on her pari-mutuel promise with an open length victory in the $60,800 Kin Pace on Sunday afternoon at Clinton Raceway.

Driver Trevor Henry had Stonebridge Quest out wide early in their quest for the lead. They worked past fellow elimination winner Dublin Rose (Bruce Richardson) and then race leader Sassafras Girl (Phil Hudon) through fractions of :27.4, :57.1 and 1:27. The popular Camluck filly then sprinted for home, drawing away by nearly nine lengths to win in 1:55.4. Ok Heavenly (Jonathan Drury) came on for second-place honours while Dublin Rose finished third.

Owned by Glenview Livestock Ltd. of Guelph-Eramosa, Ont. and breeder Angie Stiller of Arva, Ont., Stonebride Quest was making her debut from the Richard Moreau stable. The 2014 Grassroots champion has now won three races in a row and five of her 13 career starts for earnings of nearly $90,000.

The Kin win was the second in a row for Henry as he also drove Shadows Wonder to victory in last year's edition.

The Kin Pace is for fillies that were non-winners of $50,000 in 2014. The race, which was first held in 2008, was named in tribute to the Clinton Kinsmen, who introduced pari-mutuel wagering to the harness track in July of 1970. Two members of the club, the late Frank Cook and Ted McCullough, were credited with their vision for harness racing in Clinton. The track was successfully run and operated by the Kinsmen, along with the Kinette Club of Clinton, for 14 years.