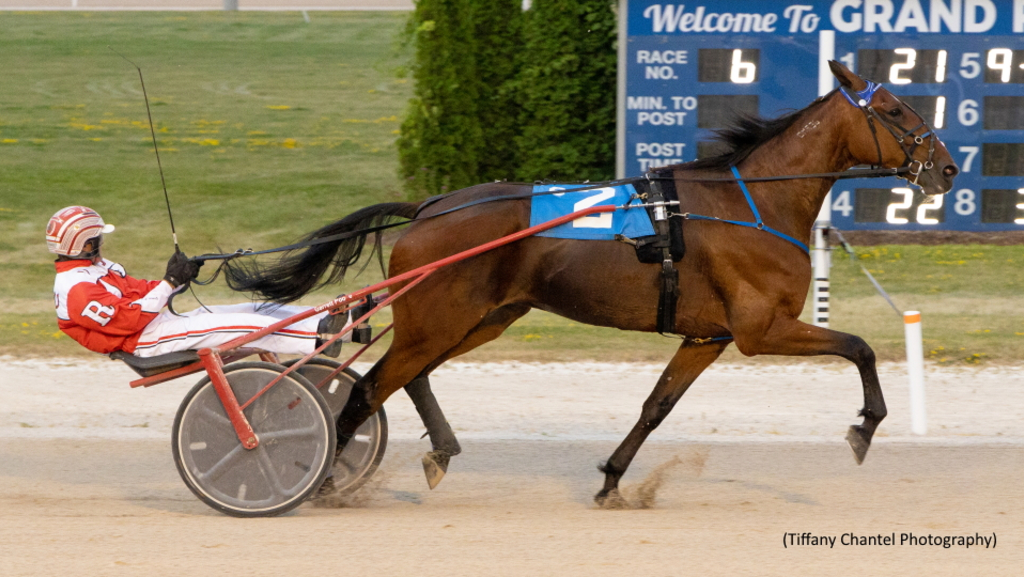 Scene A Magician marched to the top for driver Garret Rooney and then cruised home for an impressive victory in Monday’s $11,000 Preferred Trot at Grand River Raceway.

The Jennifer Pinkerton-trained Scene A Magician was parked while leading past the opening quarter in :28.4, but he eventually found his way to the pylons and proceeded to carve out middle fractions of :58.3 and 1:27.  From there he used a :29.2 closing panel to win by three lengths over Aussie Lover in 1:56.2.  Los Ballykeelamigo took home third prize.

Pinkerton owns the eight-year-old son of Daylon Magician-Scene Duharas who has manufactured a 6-4-4 record from 19 trips to the track this season.  The 26-time winner is closing in on $320,000 in career earnings.

Earlier on the card it was Saulsbrook Jessie using the same tactical approach to capture the $10,000 Fillies & Mares Preferred Pace.

Brett MacDonald hustled the six-year-old daughter of Big Jim-Atlanta Girl to the lead from Post 2 and together they led the field through fractions of :28, :57.3 and 1:26.2 before kicking home in :28.4 to win by 2-1/2 lengths over Catch An Ace in 1:55.1.  Ladies From Hell rounded out the Trifecta ticket in the six-horse affair.

Sent off as the 6-5 favourite, the Ron MacDonald trainee improved her seasonal record to 6-1-3 from 18 starts while bumped her career earnings to $226,956.