Hypnotic AM, Third Shift In 'EBC'

Vernon Downs played host to a July fourth spectacular on Saturday (July 4). It featured three Empire Breeder Classic (EBC) for trotting sophomores, with Hypnotic AM winning the $207,250 final for fillies and Third Shift emerging best from the two splits for colts and geldings.

The card also included two divisions of the New York Sire Stakes (NYSS) for freshman pacing fillies. These five races combined for more than half a million dollars in purse money.

A wild start in the EBC filly final saw No Mas Drama lead to the first quarter in :27.2, but Love A Good Story soon took the top spot before Hypnotic AM took control into the backstretch. Southwind Fern was parked first over and put slight pressure on Hypnotic AM as she hit the half first in :56.1. The field was two-by-two following Hypnotic AM as they charged around the final turn hitting three-quarters in 1:25.4.

Hypnotic AM is a three-year-old filly by Chapter Seven owned by Courant Inc. and trained by Marcus Melander. She is now two-for-two in 2020 with nine wins in 11 starts. Brian Sears drove the $3.60 winner.

Third Shift dominated the $97,750 second division of the EBC for three-year-old colts & geldings.

Berkery J and Chaptiama battled for the early lead with Chaptiama taking over just before hitting the first quarter in :27.2. Chaptiama then led to the half in :57.1 with Berkery J in the pocket and Third Shift sitting patiently in third. As they headed to three-quarters in 1:25.3, Ballcapsnbluejeans came first up and flushed out Third Shift.

Third Shift moved into second and went a little wide as they made the turn for home. Berkery J tried to split the leaders but went off-stride. Meanwhile Third Shift had another gear and forged to the front to win by over five lengths in a lifetime-best 1:52.4. Ballcapsnbluejeans came up to finish second with Sir Cromwell getting awarded third place.

Third Shift is a three-year-old colt by Chapter Seven owned by trainer Svanstedt and Melby Gard Inc. He is two-for-two in 2020 with five wins overall. Ake Svanstedt drove the $2.90 winner.

Hobbs went straight to the front and led to the first quarter in :27.2. Barn Holden then circled to the lead as they went around the clubhouse turn with Hobbs settling for the pocket. Barn Holden hit the half first in :56.3. Take The Credit was the first to make a move on the backstretch, going first-over from fourth and inching up to the leader to challenge for command heading to three-quarters in 1:24.3.

Hobbs came out of the pocket and came at them three wide as they reached the stretch. In deep stretch Take The Credit muscled his way to the front, but Hobbs wore him down and went by just before the wire, trotting a lifetime-best mile of 1:53.3. Take The Credit had to settle for second money with Barn Holden hanging on for third. 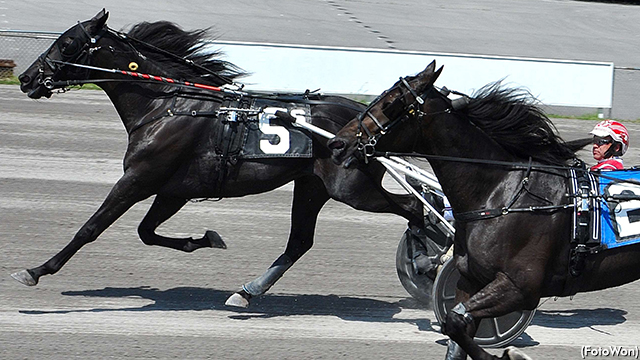 Hobbs is a three-year-old gelding by Credit Winner. Owned by Runthetable Stables and trained by Jim Campbell, he won for the first time this season and the second time in his career. Jason Bartlett drove the $17.20 winner.

Easy To Please (Roll With Joe-Lorrie Please) and Test Of Faith (Art Major-Cannae Cammie) each took the $53,100 divisions of the NYSS for freshmen pacing fillies.

Easy To Please took over just before the half and never looked back to win in a lifetime best of 1:53.2. She is owned by trainer Michael Hall, Our Three Sons Stable, Brad Grant, and Howard Taylor. She is now two-for-two in her young career. She paid $2.60 for the win.

Test Of Faith took her NYSS division going wire-to-wire in 1:52.2. She is trained by Brett Pelling for owners Melvin Segal and Kentuckiana Racing Stable and paid $11.00 to win in her maiden-breaking bow.