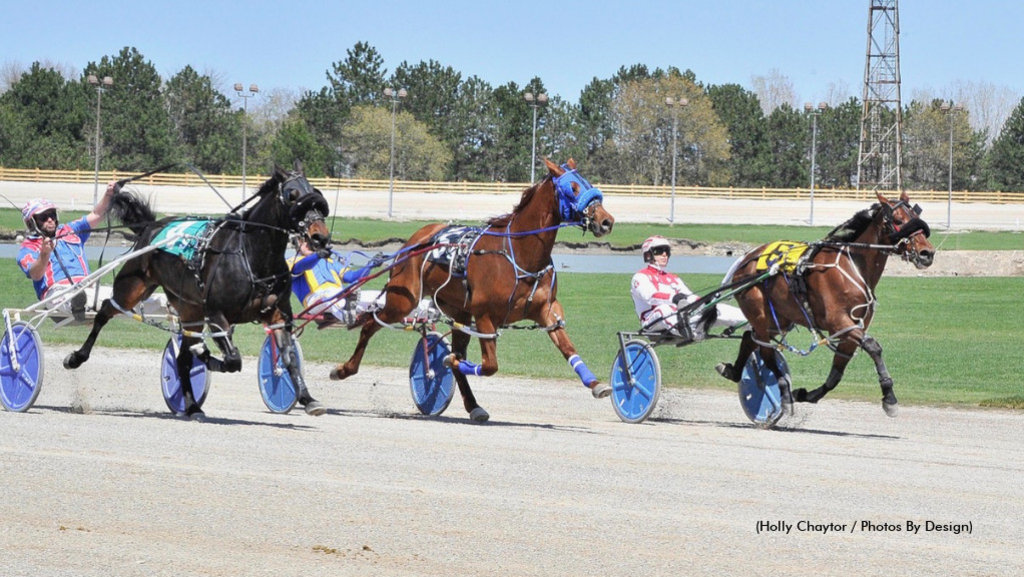 Away third to a :27.4 first quarter, Wray brushed the Artspeak gelding to the lead passing a :56.2 half and kept the pace going to three-quarters in 1:24. Growing leg weary from the stretch-side move, Dynomites Peak turned for home and clung to the lead as a wall of horses barreled nearer in the final eighth. Though the Matthew Dupuis trainee fought gamely to the finish and held off favourite Persistent Boy, who rallied from second over to just miss victory by a head. Greystone Ian O progressed off a first-over grind but settled for third and Called In Sick rallied for fourth.

Dynomites Peak races for owners Jacqueline Dinelle, Paul Smyth and Earl Casselman. He won his fifth race from 22 starts and has now earned $88,759. He paid $13.40 to win.

The other division went to Dreamfair Arnie B, who pulled a 14-1 upset in swooping from last to win in 1:53.3.

Coligny Hanover stepped clear to a four-length lead by a :27.1 first quarter and strolled toward a :56.4 half as favourite Kaporal mounted a first-over push for the front. Still applying pressure to three-quarters in 1:24.1, Kaporal had a tier developing behind with Dan Clements steering Dreamfair Arnie B to race third over. Coming for home, Dreamfair Arnie B bolted off a helmet and overtook second-over closer Twin B Jammer to win by 1-3/4 lengths while pocket-sitter Buck N Bettor took third from Coligny Hanover.

A homebred Sportswriter colt for John Lamers, Dreamfair Arnie B won his second race from 13 starts and has now earned $34,516. He paid $31.70 to win.