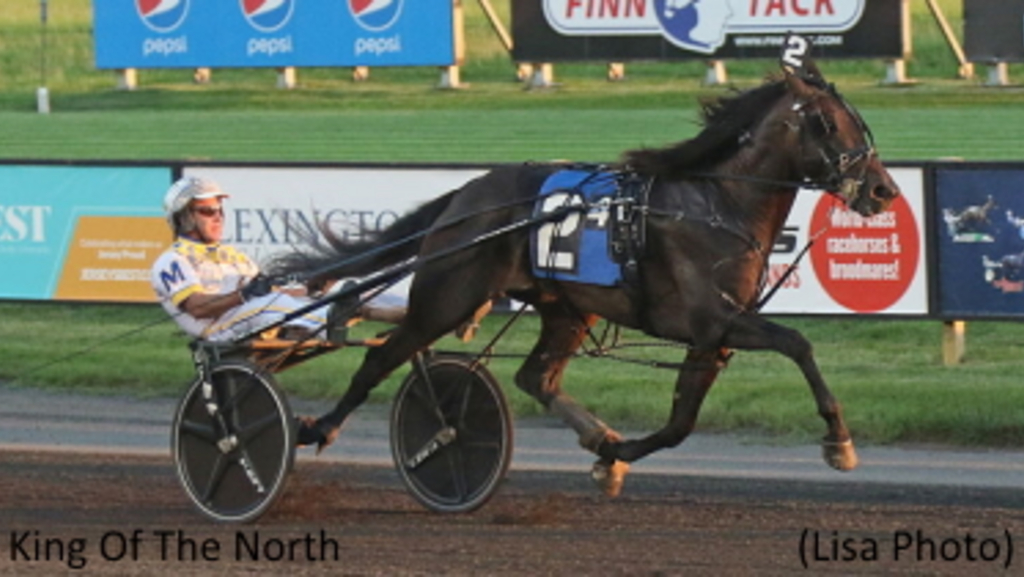 The horses are now set for the two marquee two-year-old trotting events at The Meadowlands on Hambletonian Day (Saturday, Aug. 7) as eliminations got field sizes down to 10 for the $275,000 (est.) Peter Haughton Memorial for colts and geldings and $300,000 (est.) Jim Doherty Memorial for fillies Friday night at The Big M.

King Of The North stamped himself as the favourite in the Haughton with an easy score in his elim in 1:56.1 for driver Mark MacDonald and trainer Ray Schnittker. The colt, a son of Walner-Check Me Out, used a quick burst of speed to get by early leader Temporal Hanover heading to the half and tripped that beam in a sleepy :57.3.

The 4-5 favourite maintained the lead from there, recording a 1¼-length win over the pocket-sitting 6-5 second choice Temporal Hanover. The final time was three-and-two-fifth-seconds slower than his lifetime best, much to the delight of his trainer.

“He’s like a professional soldier,” said Schnittker. “He got cheap fractions, which is good for next week. He didn’t have to do much. He just had to brush for an eighth of a mile. I was a little concerned with the horse in the two-hole because I wanted to win so we can get a better post draw for the final.”

Elimination winners get to draw for post positions one through six in both the Haughton and Doherty.

“He’s a really nice horse,” said Schnittker. “He’s like a five-year-old. Hopefully, he gets the job done next week.”

Global Pandemic, B A Superhero and Looks Like Moni finished third through fifth, respectively, in the six-horse field (with one scratch) to earn spots in the final.

King Of The North paid $3.60 to win after upping his stats to four wins from four lifetime starts.

Robertsin (a gelding by Muscle Hill-Sina) won the other Haughton elim in wire-to-wire fashion for driver George Brennan and trainer Nik Drennan. In winning for the first time in four career starts, Robertsin trotted the mile in 1:54.4 after hitting the wire three-quarters-of-a-length to the good and returned $4.60 to win as the 6-5 public choice.

“I liked him right along,” said Brennan. “He’s been drawing bad posts [post nine in all three career starts heading into Friday] but he got to see the left side of the starter car tonight [post five] and didn’t surprise me at all. He trotted home well into the wind. He’s awful good. Winning this race so we could draw a good post for the final was definitely on my mind. You’re not just looking to qualify for the final and hope you draw well. I think it’s a great way to do it.”

Letsdoit S, Classic Hill, Fast As The Wind and S I P finished second through fifth, respectively, in the seven-horse field to punch their tickets to the final.

Joviality S (Chapter Seven-Pasithea Face S) challenged leader Delilah Hanover on the far turn before going on to a convincing 2-1/4 length score in the lone Doherty elim. The Marcus Melander trainee, who was driven by Brian Sears, stopped the clock in a lifetime-best 1:54.1 in winning for the second time in three lifetime outings. She paid $7.60 as the second choice in the wagering.

With Venerable having received a bye, the top nine in the official order of finish qualified for the final. Finishing second through ninth, respectively, were Jiggy Jog S, Valentina Blu, Brickhouse Babe, Raised By Lindy, 9-5 favourite Mon Cheval (who went a brutal trip from post 10), Peyton Hanover, Delilah Hanover and Pink Gypsy.

Racing resumes Saturday at 6:20 p.m. A pair of eliminations for both the Hambletonian and Hambletonian Oaks highlight the card.