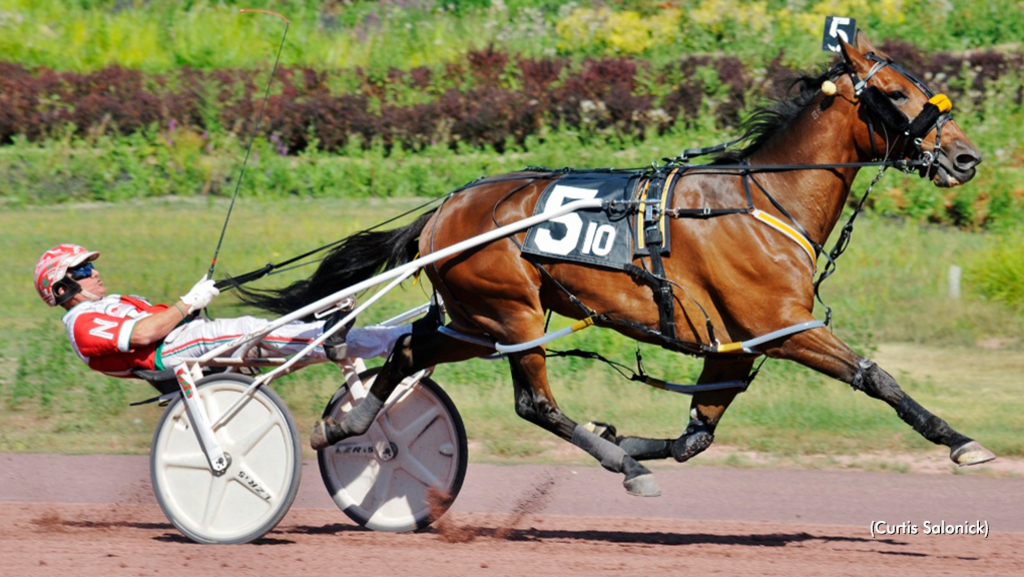 For the third time in the month of July, the Saturday afternoon featured fast-class pace at The Downs at Mohegan Sun Pocono has resulted in a 1:47.4 mile, the fastest time of the year locally, with this Saturday’s (July 30) victory going to the Somebeachsomewhere gelding Ruthless Hanover.

Perennial Pocono leading driver George Napolitano Jr. was determined to get his pacer to the top, and though three wide early and then two wide past a :26.4 opener, the mission was accomplished. There was no letup for – and from – Ruthless Hanover. He blazed to middle splits of :53.3 and 1:20.4 before the end of the 1:47.4 victory, which saw him turn back pocket-sitter Casual Cool by 2-3/4 lengths. Team Cancelliere – trainer Tom and owner and brother John – saw their fast pacer win his second straight.

There were three $17,000 contests for developing horses in the co-starring races, two for trotters and one for pacing males. One of the trots went to the strong-closing three-year-old Dandy, a three-time Pennsylvania Sires Stakes winner this season who here used his usual late kick off a second-over journey to defeat a field of older opponents by 2-1/4 lengths at the end of the 1:54.2 mile.

A six-time winner in ten 2022 trips to the starting gate, Dandy, a Cantab Hall colt, is driven by owner Jackie Ingrassia and trained by husband Frank.

The other co-featured trot saw 12-1 shot Dicentra use the Pocono Pike to post a nose victory over AP Hall Of Trix in 1:56. The Muscle Mass mare followed cover, ducked inside on the far turn, then was able to come up the inside for the narrow victory for driver Simon Allard, trainer Sabrina Shaw and owner Nicholas Malcolm.

The pacing co-feature went to the Sweet Lou gelding Good Deal, who like Dandy was also the only three-year-old in his field. Good Deal won in a new mark of 1:52.1 — some two hours and 44 minutes before trainer Ron Burke stood in the Adios winners circle across the state — rallying from far back at 27-1 to get a nose victory over High Baller. Driver Jim Pantaleano, who had four successes on the Saturday afternoon card, handled the driving for the ownership of Burke Racing Stable LLC and Weaver Bruscemi LLC, J&T Silva- Purnel & Libby, and Lawrence Karr.

A talented group of pacing mares has been gathered for the $25,000 feature event at Pocono on Sunday night (July 31), with the card beginning at 5 p.m. (EDT). Program pages are available at the PHHA website.