Betting Line Is Golden At Mohawk 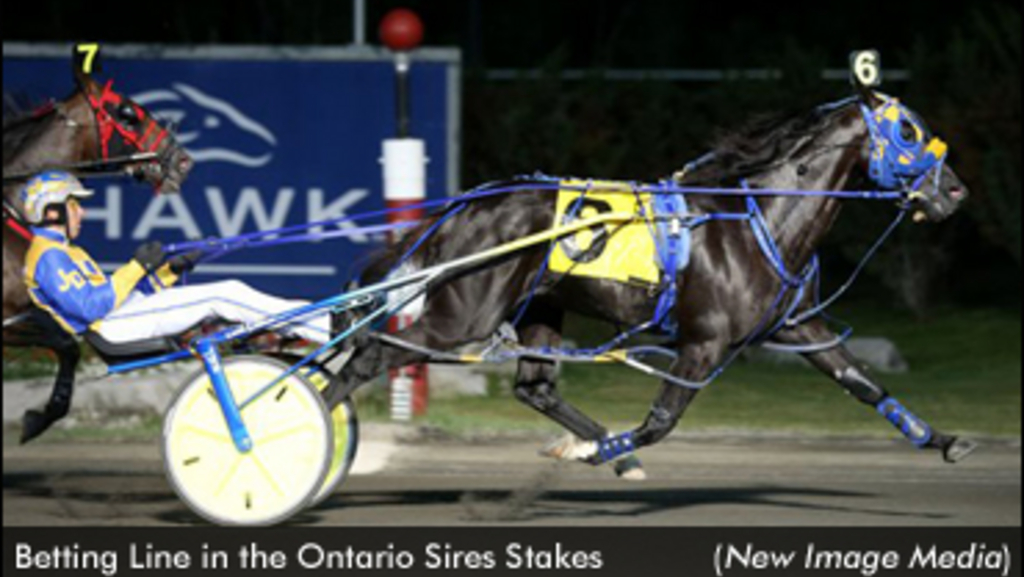 Betting Line returned to Ontario Sires Stakes action at Mohawk Racetrack on Saturday night (July 2) and the North America Cup champion powered to a one and one-quarter length Gold Series victory in 1:49.4.

Starting from post four, driver Jonathan Drury eased Betting Line away from the starting gate and settled into fourth as Nocturnal Bluechip and Sintra sprinted out to a :26.3 opening quarter. Heading for the :55.1 half, Drury and Betting Line advanced up the outside on Sintra and driver Jody Jamieson, but Jamieson put his foot on the accelerator and Drury opted to hold his position rather than battle for the front end.

Sintra led the field to the 1:22.3 three-quarters, but Betting Line was able to power by the pacesetter in the stretch, leaving Sintra to settle for second. War N Munn closed hard to be third in the $105,000 contest.

“He raced good, as he always does,” said trainer Casie Coleman of her star pupil. “JD [Drury] did a good job with him because he had a live splint bothering him and we were too close to the race to treat it.”

Coleman added that Betting Line is scheduled for a visit to the veterinarian on Monday to treat the splint, which caused the colt to run in slightly in the stretch, and should be back in fine form for the July 23 Gold event at Mohawk.

“He’s done that [run in] to me before with splint issues,” noted the Cambridge, Ont. resident. “But we’ll get it fixed up for the next Gold in three weeks’ time.”

Following the July 23 Gold Series event, the reigning Ontario Sires Stakes champion heads south of the border for the Carl Milstein Memorial at Northfield Park on August 13 and the Battle of Brandywine at Pocono Downs on August 20.

Saturday’s victory extended Betting Line’s win streak to five, with his only loss of the season coming in his May 14 debut, where he was second. The Bettors Delight son has banked $1,172,422 in his career to date for Ontario owners Coleman, Ross Warriner of Burlington, Christine Calhoun of Chatham and Mac Nichol of Burlington.

Magnum J captured the other Gold Series division, controlling the tempo for much of the race before cruising home a two and three-quarter length winner in 1:51. The mile time was a new personal-best for the Big Jim son. Nvestment Bluechip and Voracity finished second and third.

Doug McNair piloted Magnum J to the win for his father, trainer Gregg McNair of Guelph, Ont., and his partners Tony Lawrence and William Brown of Hanover, Ont. The partners also raised a Gold Series trophy in the season opener at The Raceway at Western Fair District on May 27.

With two Gold Series victories, Magnum J has sole ownership of top spot in the division standings with 100 points and will look to pad that lead when the three-year-old pacing colts and geldings return to the Campbellville, Ont. oval on July 23.

The second leg of the Summertime Series was also held on Saturday night for three-year-old pacing colts and geldings that were non-winners of $30,000 lifetime as of March 31 2016. Dreamfair Mesa pulled off a 17-1 upset with Jody Jamieson catch-driving for owner/breeder John Lamers of Ingersoll, Ont.

The son of Somebeachsomewhere, who was a seventh-place finisher in the opening leg of the series won by tonight's Gold competitor Sintra, quickly crossed to command from the outside post six before giving way to Some Gold and then re-rallying along the pylons down the lane to score the two and three-quarter length victory in a career-best 1:50.3 mile. Blayde Hanover and Teddys Super Toy came on for second and third, respectively.

The Pat Flecther trainee earned his first win since his career debut back in February. He has now banked $30,350 in 12 career starts.

In Preferred action, 8-5 favourite Evenin Of Pleasure prevailed off a similar trip, but rallied outside of Nickle Bag down the stretch to re-take the lead and then drew two lengths clear of that rival for the 1:49.2 triumph. Sylvain Filion drove the six-year-old son of Dragon Again, who equalled his lifetime mark, for trainer Richard Moreau and owner Gestion J Y Blais Inc. of Montreal, Que. Ellis Park came on for third.

On Monday, July 4, Mohawk Racetrack will kick off the Ontario Sires Stakes two-year-old season with two Gold Series divisions for the freshman pacing colts. The newcomers to the provincial program will make their debuts in races two and three. First race post time is 7:30 p.m.