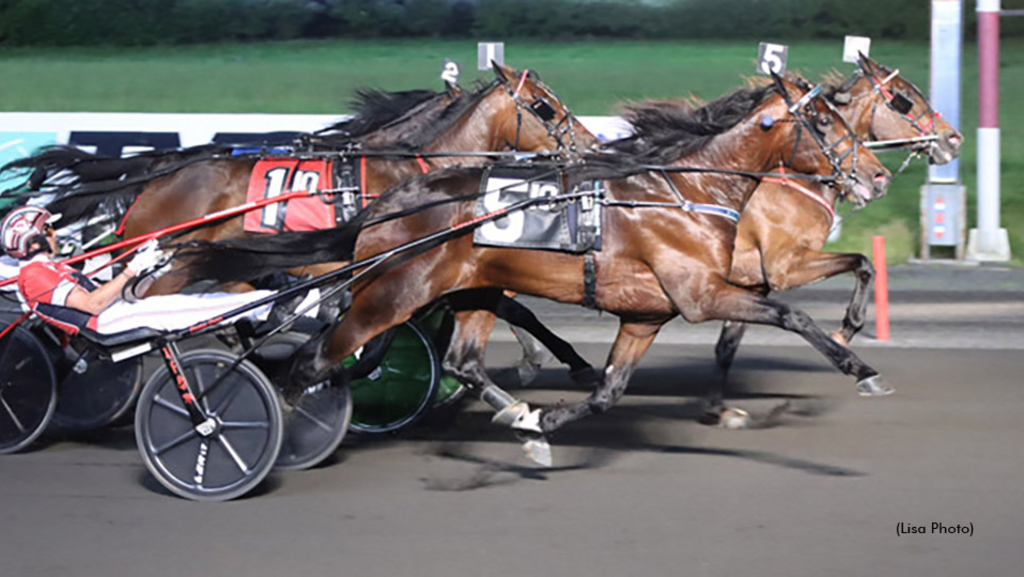 The Father Patrick gelding Amigo Volo just keeps rolling along, as the five-year-old raised his bankroll to $1,860,156 with a closing victory in the $22,500 featured fast-class trot at Harrah’s Philadelphia on Thursday afternoon (July 28).

Amigo Volo, the 2020 divisional champion among three-year-olds, raced off the pace as opponents provided the early speed, with Scirocco Rob, a winner at this level last week, taking over from Hayek in a hot :26.3 quarter. The leader backed off the pace to :56 (and driver Corey Callahan got a helmet bumping from an eager-to-go Hayek), while Amigo Volo and driver Dexter Dunn became the one to first move to the outside.

At the 1:24.1 three-quarters, Yannick Gingras moved Hayek out to challenge, giving brief cover to Amigo Volo, but when that one tipped wide in the stretch he proved to have the most, catching a stubborn Scirocco Rob by a half-length, with Hayek another one-and-a-quarter length back in third. Amigo Volo is trained by Nifty Norman and owners Pinske Stables and David J. Miller (using the middle initial to distinguish him from driver David S. Miller).

In the $16,200 co-feature for fast class horses, the eleven-year-old JL Cruze won for the 50th time in his distinguished career, with Tim Tetrick guiding him to fractions of :27.2, :56.3, and 1:24.4 en route to victory in 1:53.4 while raising his lifetime bankroll to $1,765,999. The veteran mare Sorella, herself not much shy of seven figures in earnings, gave good chase from the pocket but came up a half-length shy of JL Cruze, who is trained by Eric Ell for owners Ken Wood, William Dittmar Jr., and Stephen Iaquinta.

The $15,300 top trot for up-and-coming horses saw the Angus Hall four-year-old mare X O X O, one of the top fillies in Quebec stakes at two and three, record her fifth straight win, and third since shipping stateside, in a lifetime mark 1:54.1. After yielding to Capstone to a :27.1 quarter, Andrew McCarthy had X O X O on the move again, reclaiming the lead before the :56.2 half and reaching the three-quarters in 1:24.4 before finally holding the resilient Capstone by a length. D Racing Stable Inc. owns the Deborah Daguet-trained mare.

No driver won more than two races on the Thursday card at Philly, but six sulky-sitters achieved the feat. Five of them – Dexter Dunn, Tim Tetrick, Yannick Gingras, David Miller, and Andrew McCarthy – were the 1-2-3-4-5 top money winning drivers of 2021, in that order, while the sixth, Troy Beyer, made money for his backers Thursday, with his two victories coming in consecutive races with Meanttobe De Vie ($50.40) and Brookview Bluto ($32.00), the two longest shots of the card.

Among Friday afternoon’s highlights are a $14,400 trot for developing horses and five divisions of pacers in American Harness Driving Club action for amateur horsemen. First post is 12:25 p.m; program pages are available at the Harrah’s Philadelphia website.