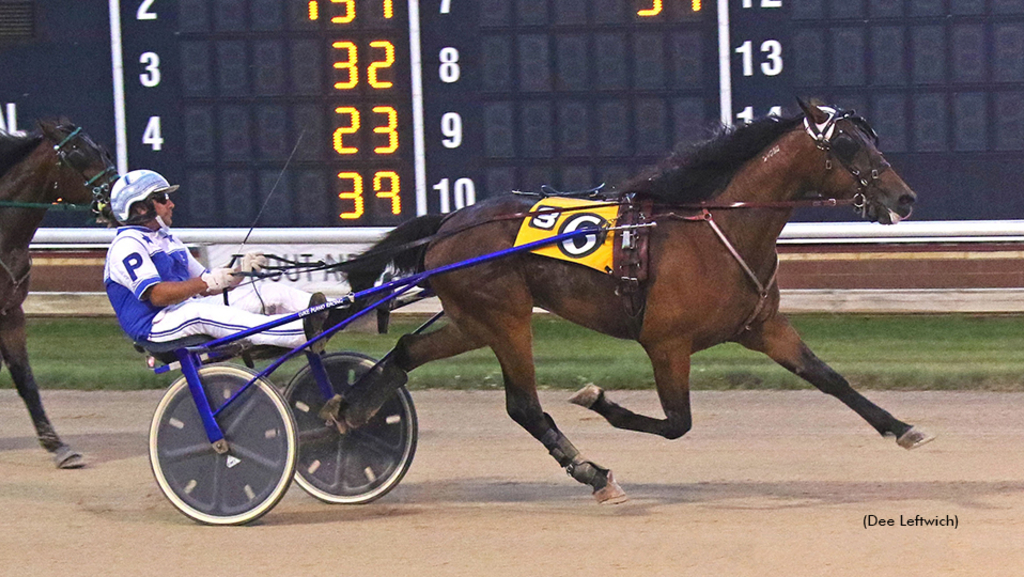 The Banker Volo babies continue to prosper at Running Aces, and on Tuesday night (July 26), Iron Sharpens Iron etched his name into the record books with an impressive 2-1/4 length win in the $19,800 Minnesota-sired freshman ‘A’ trot in 1:59.4 to tie the track record set by Mr Jackpot in 2015 and also tied by Trotterlicious in 2019.

Driver Luke Plano sent Iron Sharpens Iron to the front from post six, easily making the top and posting the opening quarter in :29 before yielding to stablemate Teeter Trotter (Rick Magee) near the half-mile.

Down the backstretch, Whata Tettegouche (Dean Magee) made a quick brush to take the lead and carry the field into the far turn with Iron Sharpens Iron making another move toward the front.

Whata Tettegouche fought gamely in the lane but Iron Sharpens Iron was strongest to the wire and drew clear to register his final quarter in :29.3 and post the record-tying win over a track rated ‘good.’ Teeter Trotter was well back in third.

St Charles Saint picked up his first career win in the $13,200 ‘B’ division in 2:06.1 with driver Brady Jenson in tow. After working hard to get the lead from post four, St Charles Saint ($3.80) was always in control and was well in hand at the finish to post a 3-1/2-length score over SV Lil Martina (Rick Magee) and Tomato Money (Dean Magee).

The Southwind Flash gelding is owned by Jesse De Long and John De Long and is trained by Justin Anfinson.

Shark Play (Williams Hernandez) made it two wins in a row in the $13,000 Open II Pace with a gate-to-wire score in 1:53.3 from post five to deliver as the 1-2 favourite. ELs Disco Johnny (Dean Magee) was second best throughout and Chase The Gold picked up the show money.

The winner is a six-year-old son of Shadyshark Hanover, owned by Jose Cervantes and trained by Maria Alvarez. He now has 15 career wins and earnings of $164,641.