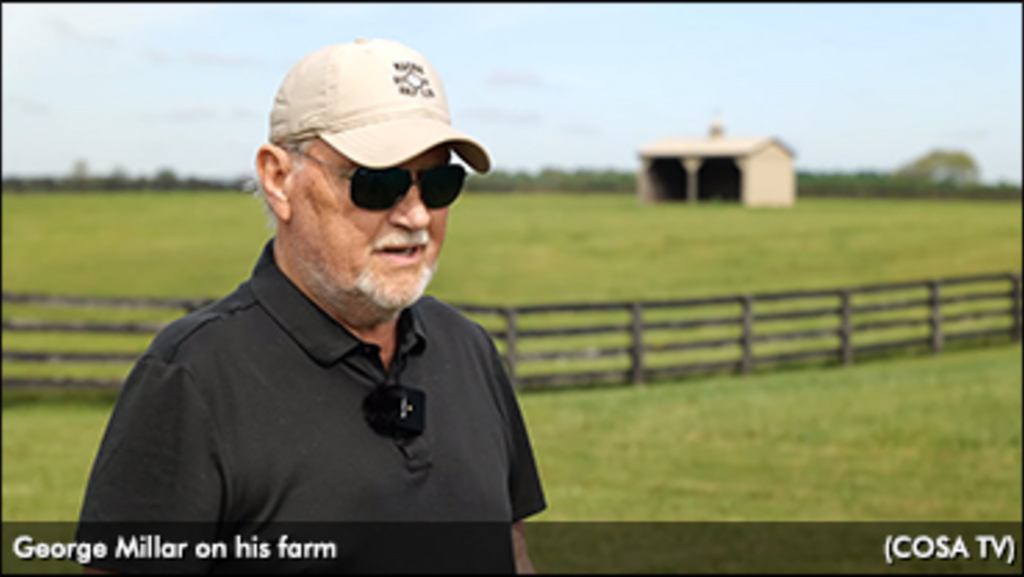 "Getting back, being here with the horses? Means everything. It's what I've always loved. I've been doing it for 43 years, now."

Owner and breeder George Millar is thrilled to be back home at his Millar Farm in Stouffville, Ont., and enjoying a new lease on life following a double lung transplant this winter. But what was originally supposed to be a two-week recovery period stretched to nearly three months.

"I'm doing a lot better now, but it was an ordeal," Millar said in a recent COSA TV feature. "I had my surgery the middle of February — it was a double lung transplant. They check the lungs for everything, and I guess they passed fine. But, they didn't do the right check, because the next day, they found out that the lungs they put in me had COVID. All of a sudden, I started rejecting the lungs. I don't know if I rejected them because of the COVID, but I got very sick."

After spending 10 weeks in intensive care and another three in a recovery facility, Millar has found that his best recovery from such an arduous procedure has come at home — with his family and with his horses. Even before he was able to return home, Millar was able to maintain at least some connection with his horses, thanks to video calls with his wife and a clip of a set of homebred two-year-olds going an early training mile sent to Millar by his trainer, Nick Gallucci.

"When I saw that, it just perked me up so much. I think I must have watched the replay of that video 100 times. It just got me anxious to get back to the farm."

Now that he's back home, Millar believes that he has turned a significant corner.

"Just getting back to the farm seems to make everything better," he said. "I'm walking, I'm doing more exercise, and I've had a lot of support from my wife and daughters.... They feed me properly; they treat me like a king."

... and to have what he feels is the "best group of two-year-olds off the farm" that he's seen in the past two decades gives Millar even more cause for optimism.

"Every year, I'll say, January or February, 'Boy, this is a good group; I really like this group.' And then, things kind of settle out around July, and they're not quite as good as you think. Nick and the guys have been saying this is a much better group we've been going with this year.... It looks like they're right. To have such a diverse group right now is good.

"It's something about breeding your own, having them off the farm, and going with them start to finish that makes them a little bit extra special. I feel fortunate that this year we've got a bit of a diverse group; I think our chances are pretty good."

Regardless of what happens on the track with his current crop of homebred rookies, George Millar couldn't ask for more from his current situation.

"I'm still pinching myself a bit. My goal is being alive, having these new lungs, and the farm. My life is perfect. I've got a beautiful wife, I've got great daughters, I've got phenomenal grandchildren. My life can't get any better right now."

The entire feature appears below.

Mr. Millar, you are a

Mr. Millar, you are a warrior. The things that you have endured and conquered are beyond description. The countless days and hours you have spent in hospital and rehab are thankfully behind you. Glad that you are now where everyone heals best; at home and in the loving embrace of your wife and family. May Good Things come your way and all the best in the days ahead.

GREAT STORY, WISHING YOU GOOD HEALTH AND GOOD LUCK ON THE TRACK