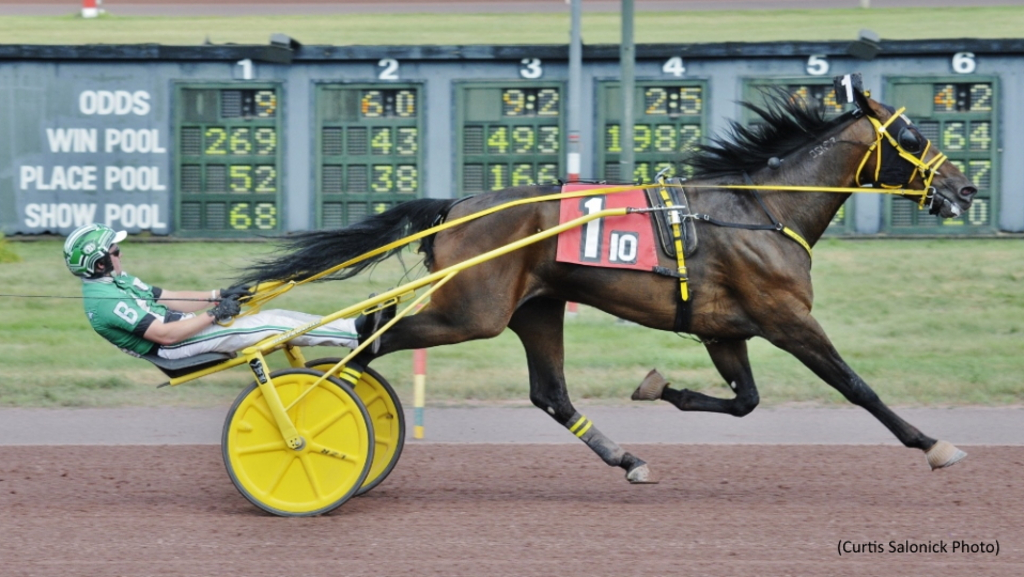 Black Hawk Down took advantage of some racing luck, then came out in the stretch and powered off to a three length victory in 1:56.3 while capturing the $15,000 featured trot Monday afternoon at The Downs at Mohegan Sun Pocono.

Braxten Boyd moved uncovered with the Kadabra gelding off the second bend and looked doomed to the difficult uncovered journey against heavy favourite Robertsin. But late in the backstretch the pocket horse couldn’t keep the two-hole closed, and Boyd was glad to tuck his trotter in to give him a well-appreciated breather. When Boyd again moved Black Hawk Down outside for the stretch drive, he had a fresh horse – and somewhat surprisingly, he found a tired pacesetter, which made the stretch task to catch the leader fairly simple.

Black Hawk Down is now two-for-four since joining the Hunter Oakes barn, and has six victories on the season. The developing trotter is owned by Elite Harness Racing LLC.

Andrew McCarthy deputized for his brother Todd, who was driving on the big card at Plainridge Monday, and made it a profitable afternoon for himself with four victories, including with a pair of Brett Pelling-trained two-year-old pacers: the Captaintreacherous–Acquavella colt Combustion, a $260,000 yearling who won his debut in 1:53.4, and the Downbytheseaside–Western Montana filly Charleston, perfect in two career starts after a 1:55.3 triumph. In both cases McCarthy was wearing the white colors with blue and black diamonds belonging to Diamond Creek.

The racing week concludes with a 1:30 p.m. program of 14 races on Tuesday.