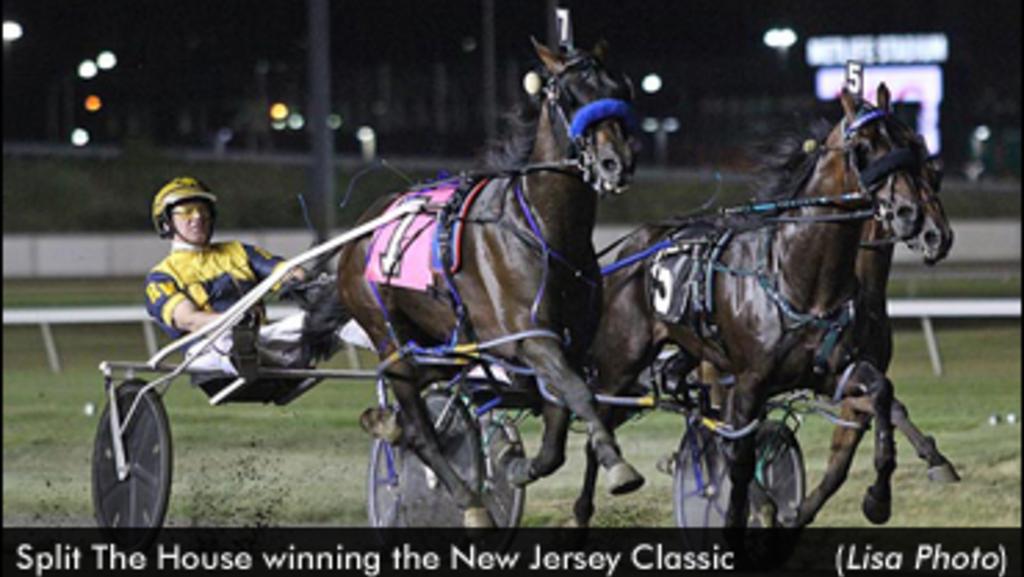 In the hands of Randy Waples, Split The House ($8.60), a son of Rocknroll Hanover-Shake The Junk, got up for a half-length tally over Revenge Shark (sired by Cams Card Shark) while 6-5 favourite Artspeak (by Western Ideal), the Dan Patch and O'Brien Award divisional champion at two, was third by a length and a quarter in the 11th race.

The $200,000 New Jersey Classic and the $100,000 Miss New Jersey are sponsored by the Standardbred Breeders & Owners Association of New Jersey.

“He’s a nice horse with all the parts,” said Waples of Split The House. “His only flaw was that he was silly behind the gate, but he’s turned the corner [after some equipment changes].

“I just wanted to draft as long as I could [behind Artspeak],” Waples added. “Then he swelled up and dug in.”

A $60,000 Harrisburg Sale purchase, Split The House was unraced at two and has now won seven of nine starts, including three straight. He has banked $177,200 for Ontario owners Scott Horner of Toronto, Peter Milligan of Mississauga and James "Friday" Dean of Guelph.

“She’s like a big diesel truck,” said winning trainer Nancy Johansson of the Rocknroll Hanover–Beachy Lady filly, who was driven to her second win of the year by Brett Miller.

She coasted past Stacia Hanover (by Western Ideal), who cut most of the mile. It was two and a half lengths to 6-5 favourite The Show Returns (by Rocknroll Hanover), who had limited room trying to slip up the rail and finished third.

Wicked Little Minx ($6.60), a $50,000 Harrisburg Sale purchase by Courant AB of Stockholm, Sweden, improved her record to two wins, one second and three thirds from eight starts this year and 10 of 19 in-the-money lifetime. Her $109,199 earnings this year lifted her total to $157,234. She was bred by Perretti Farms of Cream Ridge, New Jersey.

In other racing action, Graceful Vision put forth a sparkling debut, winning a maiden event for two-year-old filly pacers in 1:52.3. The 1-2 favourite made a backstretch brush to the lead, duelled around the far turn and sprinted away from the competition to score and impressive maiden-breaking score with Steve Smith in the sulky. She is owned and trained by Erv Miller.

Sayitall BB was a drop and pop winner, scoring an emphatic 1:50 triumph in the upper level condition event for the pacing mares. On the heels of a troubled trip, the Breeders Crown winning mare earned a nice confidence building win, which could set her up nicely for the Lady Liberty on Hambletonian Day, with eliminations (if necessary) next Saturday night. Sayitall BB was driven by Joe Bongiorno, one of two wins on the program for him and is trained by Ron Burke, who co-owns the mare with Weaver Bruscemi LLC.

McDermott expects to graduate from Florida Southern College in May of 2016 with a degree in biological sciences and athletic training. She was the recipient of an SBOANJ scholarship in 2012 and was a past Standardbred Equestrian of the Year.

Posner plants to pursue a career involving horses, with a goal to be an equine surgeon. She is enrolled in Ocean County Community College.

Lauer spent her freshman year at Radford University and transferred to the University of Arkansas, Little Rock, in 2014. She is majoring in special education with plans to use standardbreds to teach riding to mentally and physically challenged people, and work with wounded soldiers.

The Jackpot Super Hi-5 went unclaimed again on Saturday night and that carryover now stands at $219,579 into the Friday, July 31 racing program.

(With files from SBOANJ & Meadowlands Racetrack)