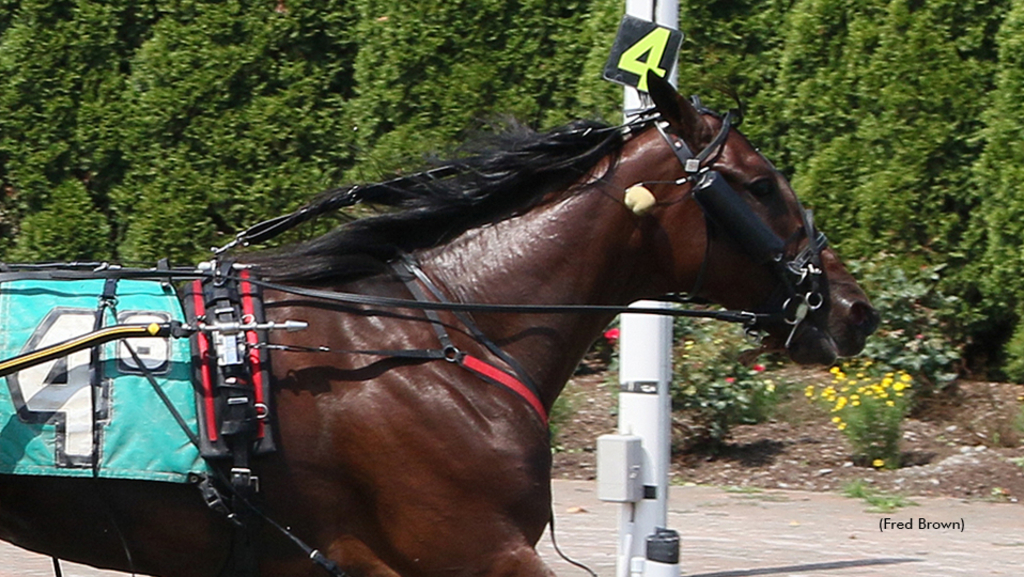 The New York Sires Stakes (NYSS) paid a visit to the "Pearl of the Southern Tier" on a steamy Sunday afternoon (July 24) at Tioga Downs.

In the first $60,300 division for three-year-old pacing fillies, driver Mark MacDonald engineered a gate-to-wire masterpiece with Valar Dohaeris, who was overlooked in the wagering at 15-1.

Sharp off the gate, MacDonald got his mount crossed over before the first turn and cruised through a comfortable :56 half. Valar Dohaeris shook off a hard run from pocket-vacater, Kele Kele, up the backstretch in :26.2, then actually drew away in the stretch for a three-length win in personal best of 1:51. Just Divine and Kele Kele followed the winner in.

"Better on a big track, she struggled some with the Monticello turns when I drove her last." MacDonald said in the post-race interview. "I thought she could win in here; she can go with any of these NYSS fillies over a bigger track. Happily, the finals will be right here at Tioga [on Saturday, Sept. 10] this year. That'll suit her."

Last year's NYSS final winner and the top filly in the division again this year, Gotthegreenlight (pictured above) was a 1:51 winner for Tioga Downs top reinsman Wally Hennessey, who returned to his home track still smiling over his Joe Gerrity, Jr. win last night at Saratoga.

Hennessey knew he had the filly to beat and her 1-4 odds demanded the respect that permitted an easy half of :55.4. Competition came in the form of Lee Loo, who rushed at the leader through a :26.3 third panel, then passed the baton to A Girl That Twirls, who shifted wide off the last turn with a menacing move that ultimately fell short. The time of 1:51 tied the American Ideal filly's lifetime mark and the prize put her over $400,000 in career earnings.

Trainer Nifty Norman sang the praises of Gotthegreenlight post-race: "She does her work well, they're going fast today and she was up to it."

Norman mentioned Grand Circuit stakes the Shady Daisy on Hambletonian Day at The Meadowlands and James Lynch at Pocono as possible upcoming dates for the filly he trains for Patricia Stable and Kovach Stable.

Matt Kakaley directed Time To Roar to an easy 1:52.4 score in the second Excelsior division. John Butenschoen trains the Winbak-bred filly, a $4,000 buy back who now races for Bay Pond Racing Stable.