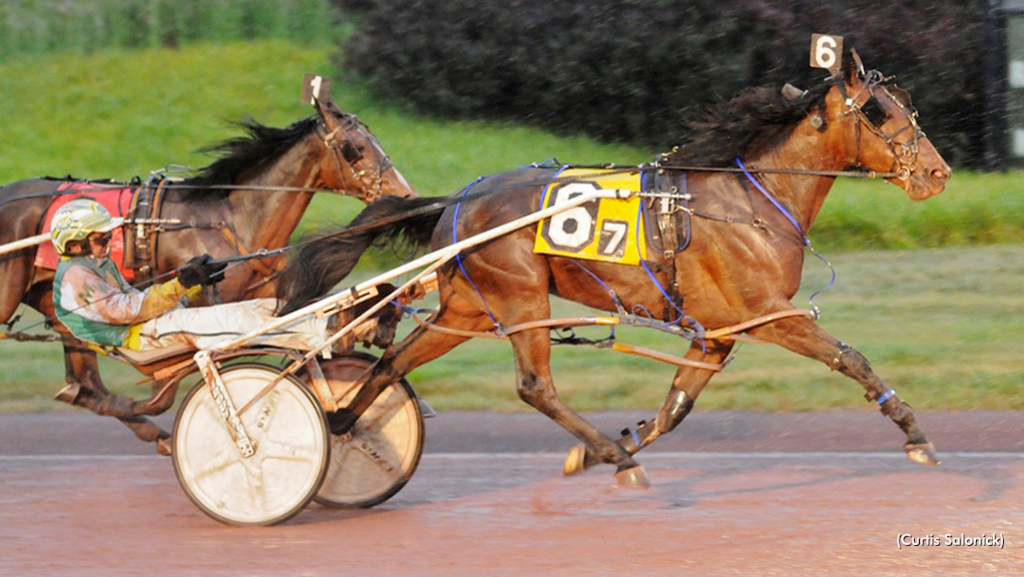 My Little Captain, already a double Pennsylvania Sire Stakes winner, is perfect in three career starts, all in stakes, after the two-year-old pacing filly captured the last of three $30,000 divisions of a Pennsylvania All-Stars event during the Sunday (July 24) card at The Downs at Mohegan Sun Pocono.

The track had just been rerated to “sloppy” after a storm had passed through, but the daughter of Captaintreacherous-My Little Delight was unaffected by the gooey going (she had won a baby Q over a sloppy surface at Philly). Mike Wilder tucked her in fourth then reserved her until later in the backstretch, where she made a quick move to challenge pacesetting Hallelujah Hanover, got the lead in the lane, then held off Dole Whip — racing on her back — by a length, with Hallelujah Hanover finishing third in the 1:54 mile. My Little Captain trained by Andrew Stafford for EVM Racing LLC.

Captaintreacherous gained a second All-Stars siring credit from Hello Yes Hi, who had finished a good-closing second in Beach Cowgirl’s amazing 1:50.2 Sires Stake win at Pocono. On Sunday, Matt Kalaley had her on the top at every call and drew away to win by 2-1/2 lengths over Proud Mary in taking a maiden mark of 1:53.4, last quarter :27.3. Pocono’s leading driver Matt Kakaley drove the Ron Burke trainee for Burke Racing Stable LLC and Weaver Bruscemi LLC, M1 Stable LLC, and Jack Piatt II.

Fastest of the three All-Stars winners was the Sweet Lou-Power Pack Hanover baby Absolute Power, who for much of the way sat in the two-hole behind favoured Ginger Tree Coco, then powered home in :27.3 to take a new mark of 1:52.3, 2-1/2 lengths to the good of the pacesetter. Scott Zeron drove for the brother team of trainer Tom and owner John Cancelliere.

The Well Said mare Drama Act added to his statistics as one of the top earners of the year by taking a $25,000 distaff handicap pace in 1:52.2 over the off going. The winner of $318,610 already this year made the top before the quarter, repulsed a good first-over challenge by Milieu Hanover, then completed her own back half in :55.1 to leave pocket-sitter Shes Pukka N 2-1/4 lengths behind, with Milieu Hanover holding for third, another three-quarter lengths behind. Mike Wilder got the catch-drive from trainer Ron Burke for The OK Corral, whose mare has taken down $739,922 in her career.

There were also two $11,000 trotting events for the American Harness Drivers Club for amateur horsemen, both held before the rain. Tony Beltrami produced a mild coast-to-coast upset with Crazy About Pat in 1:57.1 in one section, while in the handicap division the AHDC joined a recent Pocono trend when the camera could not separate Walkingintherain and driver Johnathan Ahle and favored Big Nudge, guided by Anthony Verruso at the end of a 1:57.2 mile. (There have been four dead-heats to win over the last 18 cards at Pocono.)

Pocono will be racing on Monday (July 25) and Tuesday (July 26) at 1:30 p.m. (EDT) to close this racing week. Program pages are or will be available at the PHHA website.