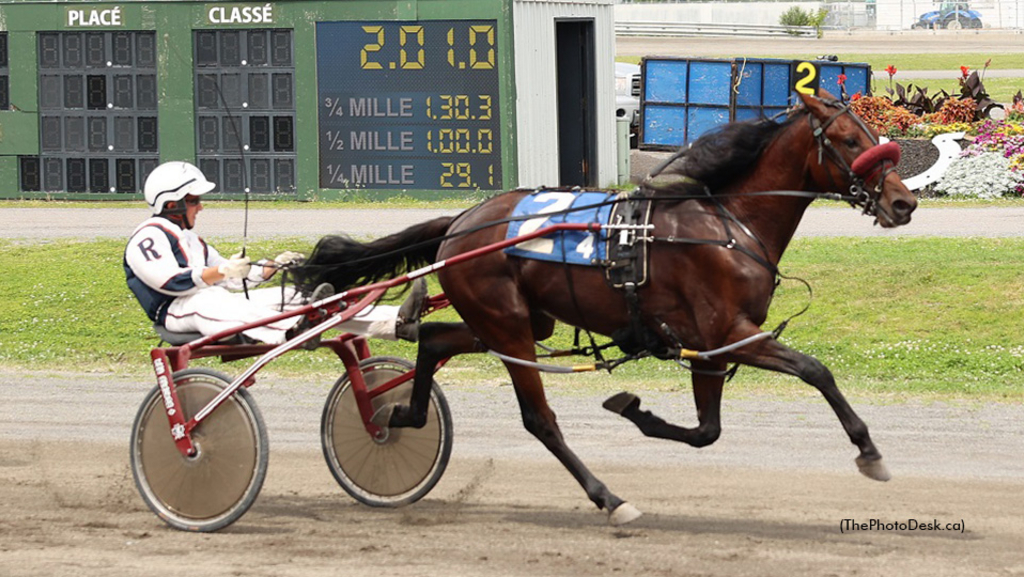 Little Diamond was one of the young stars that sparkled at Hippodrome 3R on Sunday (July 24) in four divisions of the opening round of the Future Stars Series for two-year-old pacing colts and fillies.

This was the first of three preliminary rounds in the series. The top eight divisional point earners from will return to 3R on Sunday, Sept. 11 for their respective $55,000 finals.

The fourth race was the lone division for the two-year-old colt and gelding pacers with a purse of $10,000 and seven starters (plus one refusing the gate).

Albert Alpha and driver Pascal Berube were first on the lead with Kingston Panic (Francis Picard) getting the two-hole seat to the first quarter in :29.1. Albert Alpha still led the way at the half mile in 1:00 as the race favourite Little Diamond and driver William Roy started up first-over and went after Albert Alpha. Down the backstretch, Little Diamond kept gaining on Albert Alpha past the three-quarters in 1:30.3. At this point, Maximus BG (Stephane Brosseau) went second-over to join the pack as they turned home for the stretch drive. Little Diamond and Roy were not done yet as they started down the stretch and pulled away to win by 1-3/4 lengths in 2:01.3 over Maximus GB with Albert Alpha third.

The win was the second straight for Little Diamond, a Sportswriter colt who is trained by Guy Roy for owner/breeder Richard Desrosiers of Massueville, Que. He paid $2.90 to win.

Undefeated Godiva Shadow Girl continued her winning ways in the sixth race, $6,500 division for the fillies.

With driver Robert Shepherd in the sulky, Godiva Shadow Girl was able to clear to the lead and held the field at bay with a seven-length lead through quarters of :28.4, 1:01 and 1:31.3 before coasting to the wire for a 2-3/4-length win in 2:01.1. Senorita I Am and driver Francis Picard was able to sweep three-wide in the backstretch and gain some in the stretch to finish second. Ladycorona (Samuel Fillion) finished third but had stumbled and made a break on the first turn and caused interference against YS Art Legacy (Kiwon Waldron) and thus was placed fifth by the judges. That promoted HP Space Oddity (Stephane Brosseau) to be placed third.

The time of the mile was a new lifetime mark from three winning starts for Godiva Shadow Girl, a homebred daughter of Shadow Play trained by Lyne Asselin and owned by Raymond Larose of St-Henri-De-Levis, Que. She paid $3.60 to win.

In the eighth race division for the fillies, 1-9 favourite Pocahontas Du Lac and driver Pierre-Luc Roy led from start to finish.

Holding the field at bay the entire mile, Pocahontas Du Lac went on to win by 3-1/4 lengths in 2:02. Got Beach Body (Jonathan Lachance) was second with Shadow Rose (Pascal Berube) third.

The win was the second from six starts for Pocahontas Du Lac, a Betterthancheddar filly who is trained by Francis Richard. Roy co-owns with his brother, who is also the filly's breeder, Louis-Philippe Roy, along with Maude Larouche of St-Alexandre-De-Kamour, Que. and Jean Allaire of Montreal, Que. She paid just $2.10 to win.

The other division for the two-year-old pacing fillies went to post as the second race and was won by YS Sensationalcity with driver Kiwon Waldron.

The Keystone Velocity filly led with ease from start to finish in 2:03.4 by three open lengths. The pocket-sitting Make Bet SBG (Pierre-Luc Roy) was second with All She Can (Samuel Fillion) third.

YS Sensationalcity broke her maiden in her Canadian debut following a pair of starts in the New Jersey Sire Stakes. Yannick Martel trains the homebred filly for Yves Sarrazin of La Presentation, Que. and Kapildeo Singh of Yorkton Heights, New York, and partner Danielle Henri of Saint-Esprit, Que. She paid just $2.10 to win as the 1-9 favourite.

The seventh race Preferred 2 & 3 Handicap Pace, with a purse of $6,500, saw 10-1 Goldinthebadlands and Stephane Brosseau lead from start to finish in 1:56.3, holding off the late charge by race favourite Siddhartha (Pierre-Luc Roy) to win by half a length. BS Tyrrific (Pascal Berube) was third after offering up a mid-race challenge.

The win was the seventh this year from 24 starts for Goldinthebadlands, a seven-year-old Badlands Hanover gelding who is trained and co-owned by Marc-Andre Simoneau. The Desjardins Noreau Stable of Quebec City and Jean Fontaine of Trois Rivieres, Que. also share ownership. He paid $22.30 for the upset.

Track Notes: Both Francis Picard and Pascal Berube scored driving doubles on the Sunday program. Live racing resumes at 3R next Friday with first race post time at 4 p.m. The second leg of the Breeders Trophy Series for three-year-old trotting fillies and colts will headline the program.