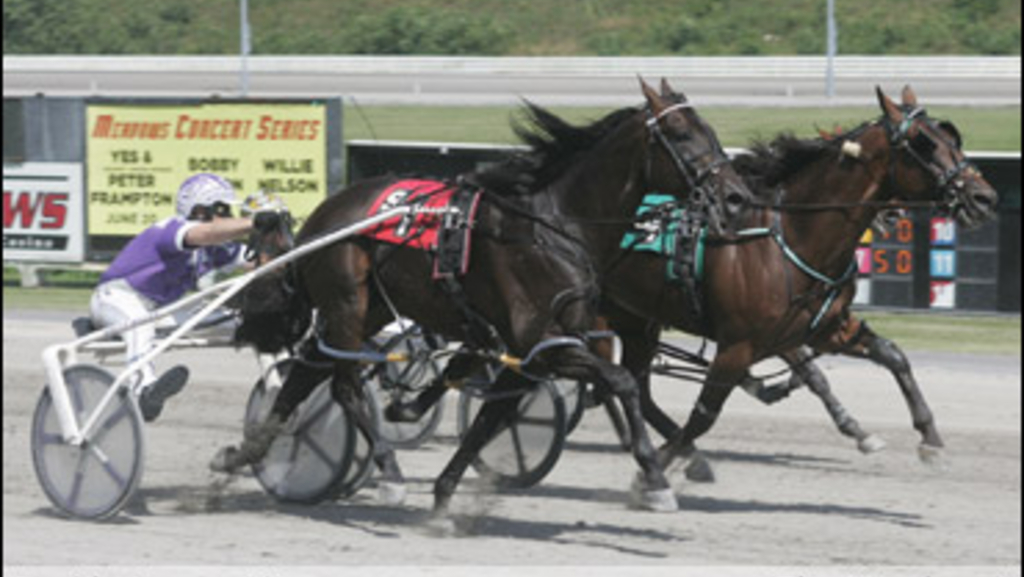 Rockin Image, Versado and Pang Shui captured eliminations of the Delvin Miller Adios at The Meadows Saturday and will lead the field into next Saturday’s $500,000 final

Also qualifying for the final of the “Pace for the Orchids” for three-year-old colts and geldings were We Will See, Delmarvalous, Im Gorgeous, Nova Artist, Whackamole Hanover and Trick Man. Next Saturday’s powerhouse card also features the $200,000 Quinton Patterson Adioo Volo for three-year-old pacing fillies and the $100,000 Gov. David Lawrence for freshman pacing colts and geldings. First post Adios Day is 12:55 p.m.

Rockin Image, who won an elimination of the Meadowlands Pace before finishing a respectable fourth in the final, was tested Saturday in a first quarter that saw him looped by Delmarvalous. Stuck outside and forced to go on for Yannick Gingras, Rockin Image burned that panel in :26.3.

That left him vulnerable to the late charge of We Will See, who enjoyed a ground-saving trip in third. Moreover, We Will See entered The Adios undefeated in three career starts at The Meadows and appeared poised to pounce once more.

But when We Will See looked him in the eye, Rockin Image had just enough gumption to turn back his rival by a nose in 1:50.2. Delmarvalous saved show.

“I’d really prefer to have him come from behind,” said Jimmy Takter, who trains the son of Rocknroll Hanover-Kikikatie for Lothlorien of Cheltenham, ON. “He had throat surgery, and we lost a month with him. We Will See had the better trip. We had to work a little too hard the first quarter on a track that was labouring.”

Versado and Dave Palone found themselves in an unenviable position—fifth by six lengths, well behind a leader who had just strolled through a second quarter in :29. But Versado picked up live cover from Art Professor, and that was the only help he needed.

“I knew my horse had one really good run,” Palone said. “It worked out perfect when I got cover that took me just far enough. When I flipped him the middle of the last turn, he paced home strongly. It couldn’t be a better set-up for next week. He only raced from the middle of the turn home.”

The third elimination was the most eventful, as Foreign Officer blazed the first quarter in an almost unthinkable :25.3, extreme speed that prompted breaks from the favourite, Valentino, as well as Blue Rock and Tobago Cays.

The weary Foreign Officer had nothing left for the stretch, creating an opportunity for the closers. Pang Shui shot the Lightning Lane to score in 1:52.2 for Jim Morrill, Jr. A pair of long shots, Whackamole Hanover and Trick Man, finished second and third, respectively.

Ray Schnittker trains Pang Shui, a homebred son of No Pan Intended-Road To Pandalay, for the Peter Pan Stables.