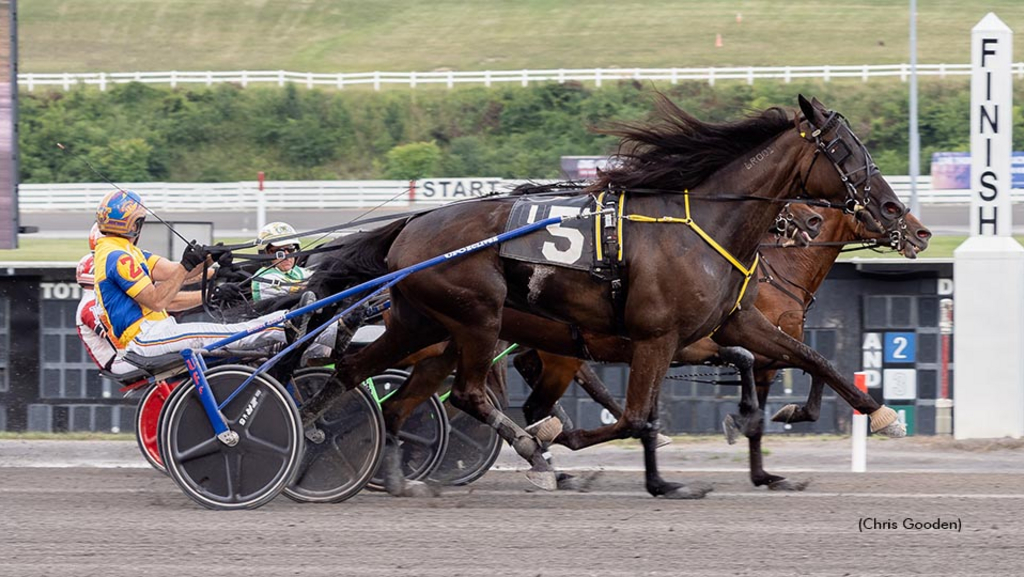 Last in the field of five at the three-quarters, Keystone Chaos looped the field in the lane to capture his third straight victory in Friday’s $16,000 Open Handicap Trot at Hollywood Casino at The Meadows.

Barn Hall cut out a moderate :57.3 opening half, but when Brian Zendt tipped Keystone Chaos wide for the drive, Barn Hall could not withstand his finishing kick. Keystone Chaos downed him by a head in 1:54.2, with Rising MVP third.

In Friday’s Great Lakes Amateur Driving Association (GLADA) leg, Bill “The Flying Antique” Daugherty Jr. moved Rose Run Whitney three-wide past the half and the pair jogged off to a convincing victory. Joelene Christman and Enzio captured the other $8,500 split in the event.

Daugherty was parked with cover to the half before he tipped Rose Run Whitney and showed her racetrack. The four-year-old daughter of Uncle Peter-Stonebridge Dancer responded by overtaking the leader, Jamie “Squirrel” Coffy (Rev It Up Man), and drawing off to score in 1:56.2. Tom “Mayhem” Svrcek (Whiskey Lindy), finished second, two lengths back, while Floyd “The Roper” Rhodes (Forever Jesse) and Stephen “You’re Never Too” Oldford (Pepin Coolie) completed the ticket.

Christman found herself in a pickle down the backside, pinned to the cones while Svrcek and Berkery J opened a sizable lead. Christman used every inch of the stretch to edge Svrcek by a neck in 1:56. Oldford (Sumbodygetdisfool) and Rhodes (Back Door Man) were third and fourth, respectively.

Saturday’s card at The Meadows features two eliminations (Races 8 and 9) for the $400,000 Delvin Miller Adios Pace for the Orchids. Saturday’s card also offers a pair of stakes for three-year-old filly pacers — a $132,231 Pennsylvania Sire Stakes and a $60,000 PA Stallion Series event.

The final of the Adios is set for Saturday, July 30, when the “Pace for the Orchids” anchors a blockbuster card that features six Grand Circuit stakes. The Adios Day card kicks off at 11:45 a.m.