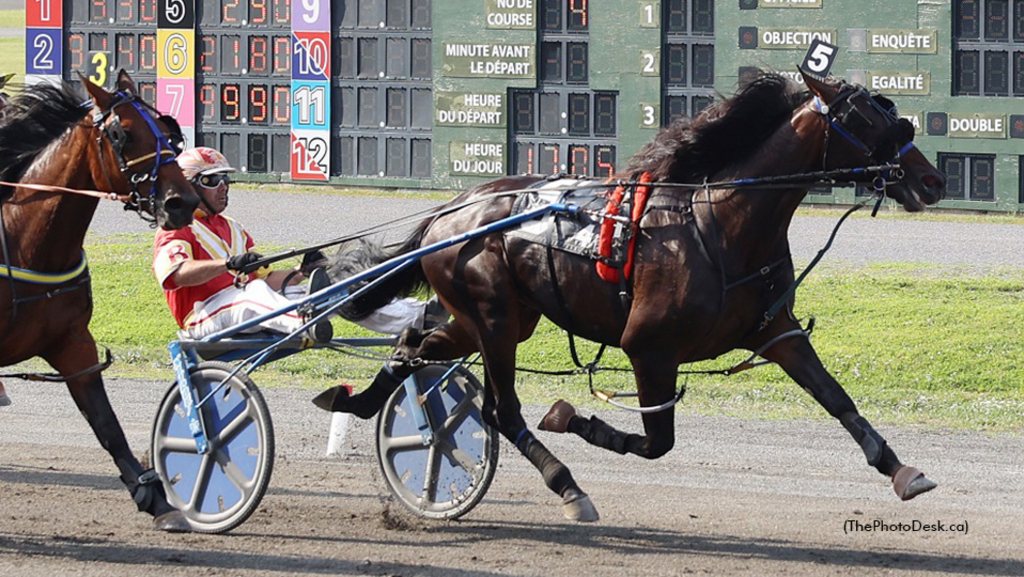 Hippodrome 3R hosted the opening round of the Future Stars Series for two-year-old trotters on Friday afternoon (July 22) featuring two $10,000 divisions -- one for the colts and one for the fillies -- both won by driver Stephane Brosseau.

This was the first of three preliminary rounds in the series leading towards the $55,000 finals on Sunday, Sept. 11, when the top eight point-earners from each division will compete for the championship titles.

In the $10,000 fourth race colt division of the Future Stars Series, Kinnder Thinktwice showed he is ready to race as well as three of his siblings (all Quebec champions).

Starting from post four, Brosseau left with Kinnder Thinktwice and led the field to the first quarter mile in :30.4 with Capteur De Rire (Guy Corbeil) sitting second. Kinnder Thinktwice then led the field the rest of the mile race through splits of 1:02.3 and 1:33.2 and held off a persistent first-over Auguste (Pascal Berube) by a half-length in 2:03.3. C Un Bon Deal (Francis Picard) was third.

Friday's outing was the first pari-mutuel start for Kinnder Thinktwice. He was the race favourite and paid $2.90 to win. The Wheeling N Dealin-Majestic Joy colt was bred and is owned and trained by Denitza Petrova of Melbourne, Que.

In the sixth race $10,000 division for the fillies, Kenogami Courage notched her second win in three starts with an easy 2:05 triumph over Apocalypse Alpha (Pascal Berube).

Kenogami Courage paid $2.90 to win as the favourite. The Lookslikeachpndale-Profound Wisdom filly is also well-bred and is a half sister to the Quebec champ Kenogami Coco (4,1:53.4f, $222,565). She is trained by Jean-Francois Reid, who bred and co-owns the filly with Brosseau, Marie-Claude Reid and Maurice Houle.

In the third race $6,500 Preferred 2 & 3 Handicap Trot, the Maxime Velaye-trained Capteur de Reve and Brosseau led from the start, winning by three-quarters of a length in 1:59.1 over Fix A Drink (Robert Shepherd) and Stella Alpha (Pascal Berube). And eight-year-old homebred son of  Muscle Mass out of Noblesse, the gelding is owned by Ecurie Provoquante. He earned his first win of the year following four starts at Rideau Carleton Raceway.

Track Notes: Driver Stephane Brosseau not only won both divisions of the series Friday, but ended the day with a driving quadruple for the first time this season. Pascal Berube had a driving triple and Sylvain Tremblay enjoyed a training double. The opening round of the Future Stars Series for two-year-old pacers is this Sunday at 3R with four divisions -- three for the fillies and one for the colts. Post time is 12 noon on Sunday.